Is What Low-Income Brazilians Are Eating in Popular Restaurants Contributing to Promote Their Health?
Previous Article in Journal

:
Infant malnutrition remains an important cause of death and disability, and Haiti has the highest prevalence in the Americas. Therefore, preventive strategies are needed. Our aims were (1) To assess the prevalence of malnutrition among young children seen at a health center in Haiti; (2) Examine adherence to infant feeding practices recommended by the World Health Organization (WHO) and the association to nutritional status. This cross-sectional study recruited children from the Saint Espri Health Center in Port Au Prince in 2014. We recorded feeding practices, socio-demographic data, and anthropometric measurements (WHO-2006). We evaluated 278 infants and children younger than two years old, aged 8.08 ± 6.5 months, 53.2% female. 18.35% were underweight (weight/age <−2 SD); 13.31% stunted (length/age <−2 SD), and 13.67% had moderate or severe wasting (weight/length <−2 SD). Malnutrition was associated with male gender, older age, lower maternal education level, and greater numbers of siblings (Chi2, p < 0.05). Adherence to recommended breastfeeding practices was 11.8–97.9%, and to complementary feeding practices was 9.7–90.3%. Adherence was associated with a lower prevalence of malnutrition. Conclusion: Prevalence of infant and young child malnutrition in this population is high. Adherence to WHO-recommended feeding practices was associated with a better nutritional status.
Keywords:
breastfeeding; feeding practices; infant feeding; nutrition; malnutrition; pediatrics; primary health care

The Ministry of Health and various international organizations performed several health surveys in Haiti between 2006 and 2012 [1,2,3]. In 2012, infant mortality in Haiti was 59–73 per 1000 live births, and under-five mortality was 88 per 1000 live births [4,5], the highest in the WHO region [4]. Although the prevalence of wasting has decreased to 4.1% (weight/height <−2 SD), great vulnerability and nutritional risk persists [6]. The prevalence of stunting (height/age <−2 SD) is 23.4% in children <6 years of age [1]. Infant feeding depends on cultures and customs, which can vary regionally and locally. The only study of infant feeding practices in Haiti [6] to date did not evaluate the association between such practices and the nutritional status of children.
Klinik Saint Espri Health Center is located in the Croix de Bouquetes commune, near Port Au Prince. This center opened in 2001 and is run by the American non-governmental organization (NGO) Haiti Medical Missions of Memphis [7]. Malnutrition is a frequent cause of consults and treatment program referrals at this center, but the magnitude of the issue is unknown. Low-cost evaluation methods using local staff and resources are needed to gather relevant data at the community level. This information could enhance planning, resource utilization, and intervention strategies. Studying and improving feeding practices is one important strategy [8].
The objectives of the present study were to assess the prevalence of malnutrition among infants and young children visiting the Klinik Saint Espri Health Center, to measure adherence to WHO-recommended feeding practices [9,10], and to evaluate the association between feeding practices and nutritional status.

We conducted a cross-sectional study at the Klinik Saint Espri Health Center in September 2014, using a convenience sample of infants and young children seen for acute morbidity, health check of newborns and infants, vaccination, or malnutrition within the Child Health Programs. We aimed to reach a sample of 200 children, based on a previous estimate of 323 visits per month. Recruitment was carried out by general and individual invitation in the waiting room. Children younger than two years old whose parents agreed to participate and who signed the informed consent form were included. Children who required immediate care due to severe disease or with clinical dehydration were excluded; excluded children were similar in age and sex to the final sample.
We developed a survey for the purposes of this study, translated into Haitian Creole by medical staff. The instrument was pilot-tested by two interviewers, and then final adaptations of the format and language were applied (Appendix A). The pilot instrument was administered to 20 children recruited from the waiting room, 2 months before the beginning of the definitive study. The survey evaluated five areas: (1) Identification and general characteristics of the patient (birth date was verified in the clinical records); (2) Brief social evaluation (maternal education, work, number of siblings); (3) 24-h dietary recall, collected once per participant by personal interview with each caregiver; to assess portion size, we used common plates and glasses obtained from local businesses and made models of common foods with painted plastic foam (Appendix B). For breastfed infants, it was not possible to estimate the volume of milk consumed, due to the variety of breastfeeding practices; (4) Use of nutritional supplements during the last week; and (5) Additional breastfeeding-related questions, including age at first breastfeeding, duration of exclusive breastfeeding, age at introduction to solid foods, and age at weaning from breastfeeding. The survey was conducted privately in an individual room by one of five trained interviewers; two were center staff and three were volunteers; all spoke fluent Haitian Creole. After the survey was completed, standardized anthropometry was performed, and the nutritional diagnosis was communicated to the child’s guardian. Children with wasting were immediately referred to the center’s malnutrition program. Daily reviews of the surveys were carried out to detect duplications and mistakes. Based on the information reported in the survey, specifically the 24-h dietary recall, indicators of feeding practices were calculated based on the methodology proposed by the WHO [6].
Anthropometry: Children were weighed without clothing, using a ADE non-digital infant scale, calibrated daily. A handmade wooden infantometer was used to measure supine length, with the head supported at one end, the torso and lower limbs extended, and feet flexed to 90° and supported by the lower-end stopper, to the nearest 0.1 cm. Head circumference (HC) was measured with a non-elastic measuring tape, fixed on the occiput and passing around the head and above the supraorbital ridges, as a marker of chronic undernutrition. Mid-brachial arm circumference was loosely measured at the mid-point between the acromion and the olecranon with the same non-elastic tape. Measurements were performed twice, rated, and repeated if inconsistencies were identified. Most of the measurements were performed by the first author (BI). The first author also trained the health center team (3 nurses and 1 paramedic) during a 4-h session and supervised in the application of the questionnaires (initially for the duration of the entire interview, and subsequently via intermittent daily observations). We excluded five subjects with incomplete data or inconsistent measurements who were not available for a new measurement.
The 2006 WHO Child Growth Standard was used; z-scores were calculated using the Anthro® program [11,12]: for weight/age (zW/A), length/age (zL/A), weight/length (zW/L), head circumference/age (zHC/A), and mid-brachial circumference/age (zBC/A) [13]. The presence of edema was recorded. We used the 2006 WHO classifications for nutritional status [14]. A zBC/A value <−2 SD or measurement <125 mm was considered suggestive of malnutrition.
Adherence to feeding practice indicators: After applying the survey and before defining the nutritional status, the principal investigator (BI) calculated the indicator scores according to the WHO 2010 criteria for the child’s age [6].
Statistical analyses: Descriptive statistics of numerical variables were performed; distributions were verified using the Anderson-Darling test. Variables were expressed as mean (±SD) or median (range). Parametric (Student’s t-test) or non-parametric (Mann-Whitney) tests were used to compare results. Prevalence by sex and age were calculated (chi-squared test), and univariate correlation analyses were carried out to evaluate for associations. We evaluated the association between adherence to recommended feeding practices and nutritional status using the chi-squared test. The MINITAB-17® program was used for statistical analyses. p < 0.05 was considered significant.
Ethics: The Research Ethics Committee of the Faculty of Medicine, Pontificia Universidad Católica de Chile; the medical directors of the Klinik Saint Espri Health Center; and the Haitian ambassador in Chile approved this study. All parents or guardians signed a written informed consent form, written in Creole. If the guardian was illiterate, a trusted person read the consent form (Ethics approval code 14-003).

We assessed 278 infants, aged 8.08 ± 6.5 months (range: 13 days to 24 months); 41% were younger than six months, 31% were 6–12 months, and 28% were 13–25 months. Overall, 53.2% were female. There was no difference in age between girls and boys: 7.89 ± 6.05 and 8.31 ± 6.97 months, respectively (Mann–Whitney test, p = 0.59). Table 1 shows the characteristics and living conditions of the families. Most caregivers reported living near the Health Center, and the remaining came mainly from areas where the camps of the displaced populations following the 2010 earthquake are concentrated. Only 17.9% reported living in camps and/or housing made from lightweight materials. Parental employment was 34.5%, mostly small-scale trade jobs.
Median maternal age was 28 years range: (16–46 years). 43.5% of surveyed mothers had completed primary education, and 6.5% had no schooling. 15.35% of caregivers were unable to sign their names upon request (classified as illiterate). 35.7% of mothers reported having one child, 41.8% two or three children, and 22.5% four or more.

Table 2 shows the prevalence of malnutrition according to various indices: 18.35% were underweight (weight/age <−2 SD); 13.31% had stunting (length/age <−2 SD); and 13.67% had moderate or severe wasting (weight/length <−2 SD). It is noteworthy that 10.8% had microcephaly and only 4.67% had low brachial perimeter.
The curves for the anthropometric indices were displaced to the left relative to the WHO standard, both globally and by age and sex (Figure 1 and Figure 2). Importantly, only 30.6% of the infants with zW/L <−2 SD (acute malnutrition or wasting) were enrolled in the Malnutrition Program of the Health Center. None of the children had edema.

3.2. Malnutrition by Sex and Age

3.3. Malnutrition According to Family Characteristics

In conclusion, we found a significant prevalence of child malnutrition, especially among males and older infants. Maternal illiteracy, older maternal age, and larger numbers of children per family were associated with higher rates of malnutrition. We found that low adherence to WHO-recommended feeding practices was also associated with malnutrition; good breastfeeding practices may be an important protective strategy.
According to evidence-based practices currently recommended by the WHO [21,22,30,33,34,35], our results indicate that the principal recommendations for improving nutritional status in this population are early initiation of breastfeeding, exclusive breastfeeding for infants under six months, continued breastfeeding to two years of age, and complementary feeding beginning at six months and no later. We also recommend strengthening the existing malnutrition program to target the groups of children at the highest risk of malnutrition identified in this study. We hope that our study will contribute to increased awareness in the target population of the Klinik Saint Espri and other health centers and guide child nutrition interventions, using the strengths and resources available in the health center and the community.

Survey used in the study, in Haitian Créole and in English:
Additional page: calculation of individual indicators of feeding practices (WHO 2003). 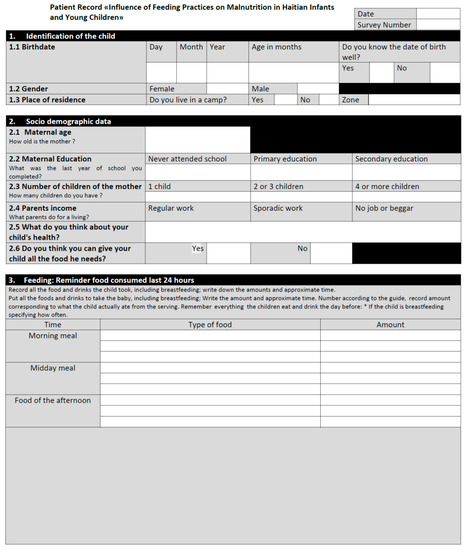 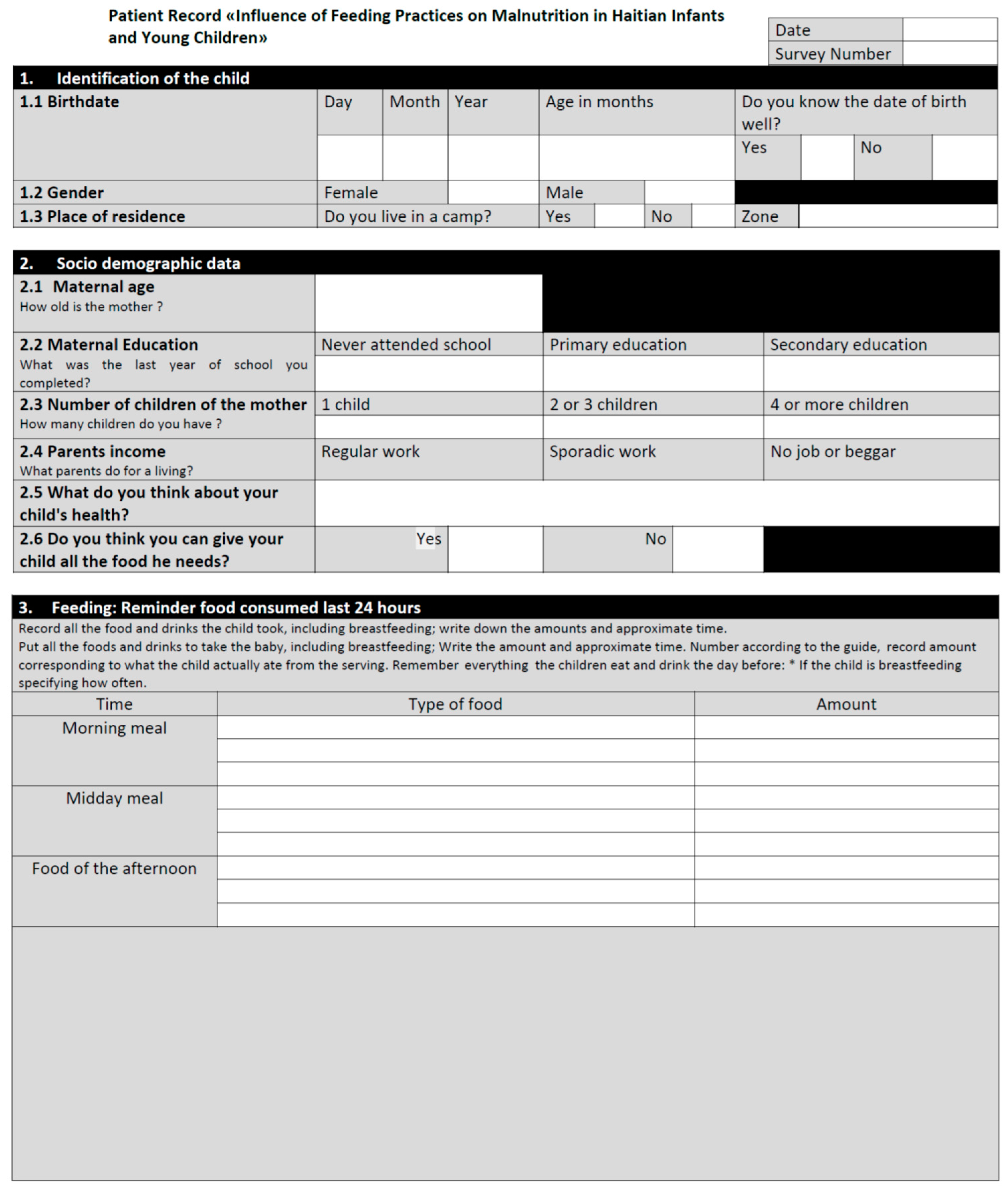 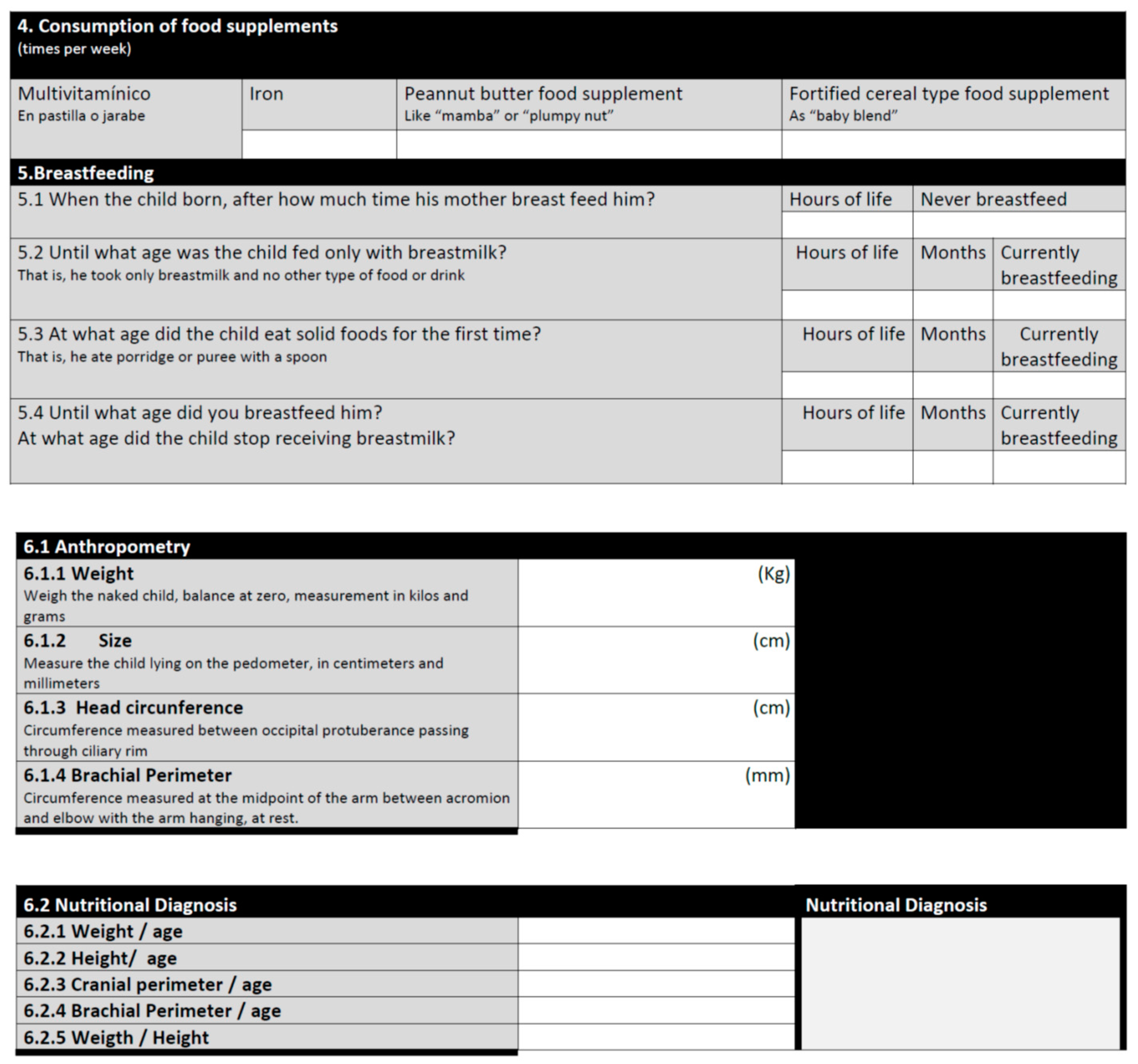 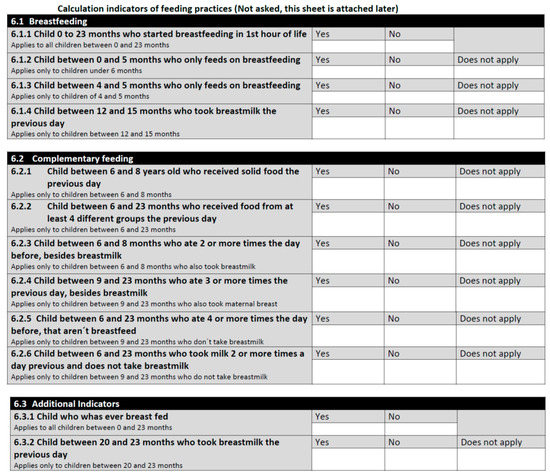 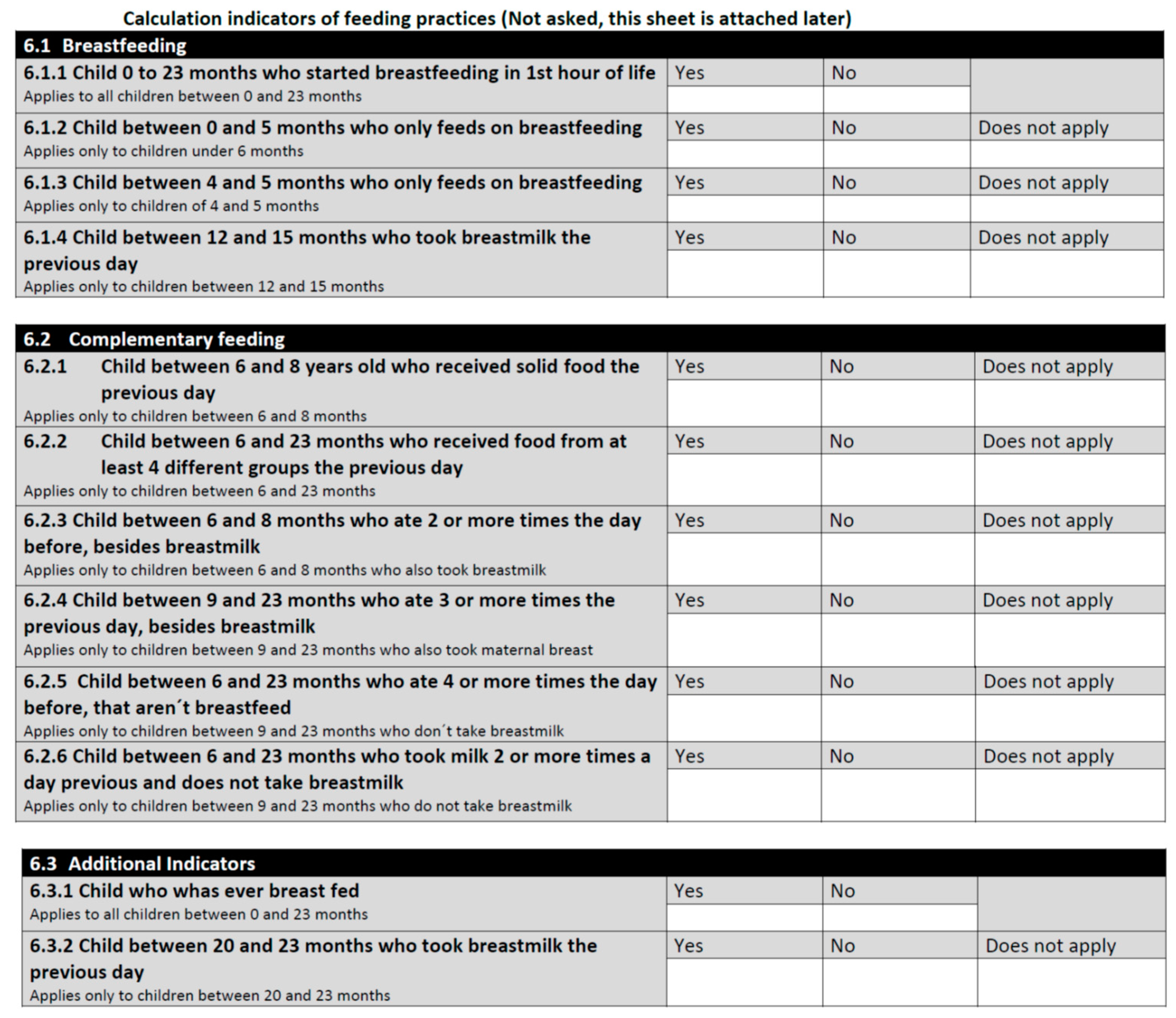 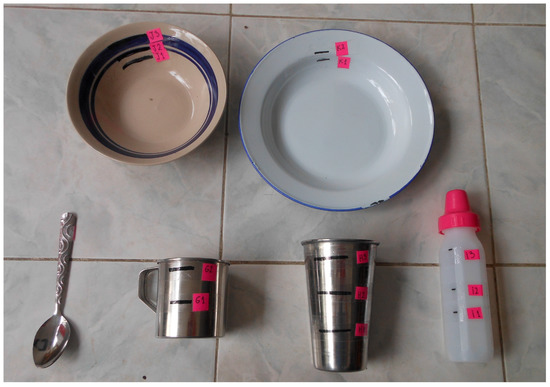 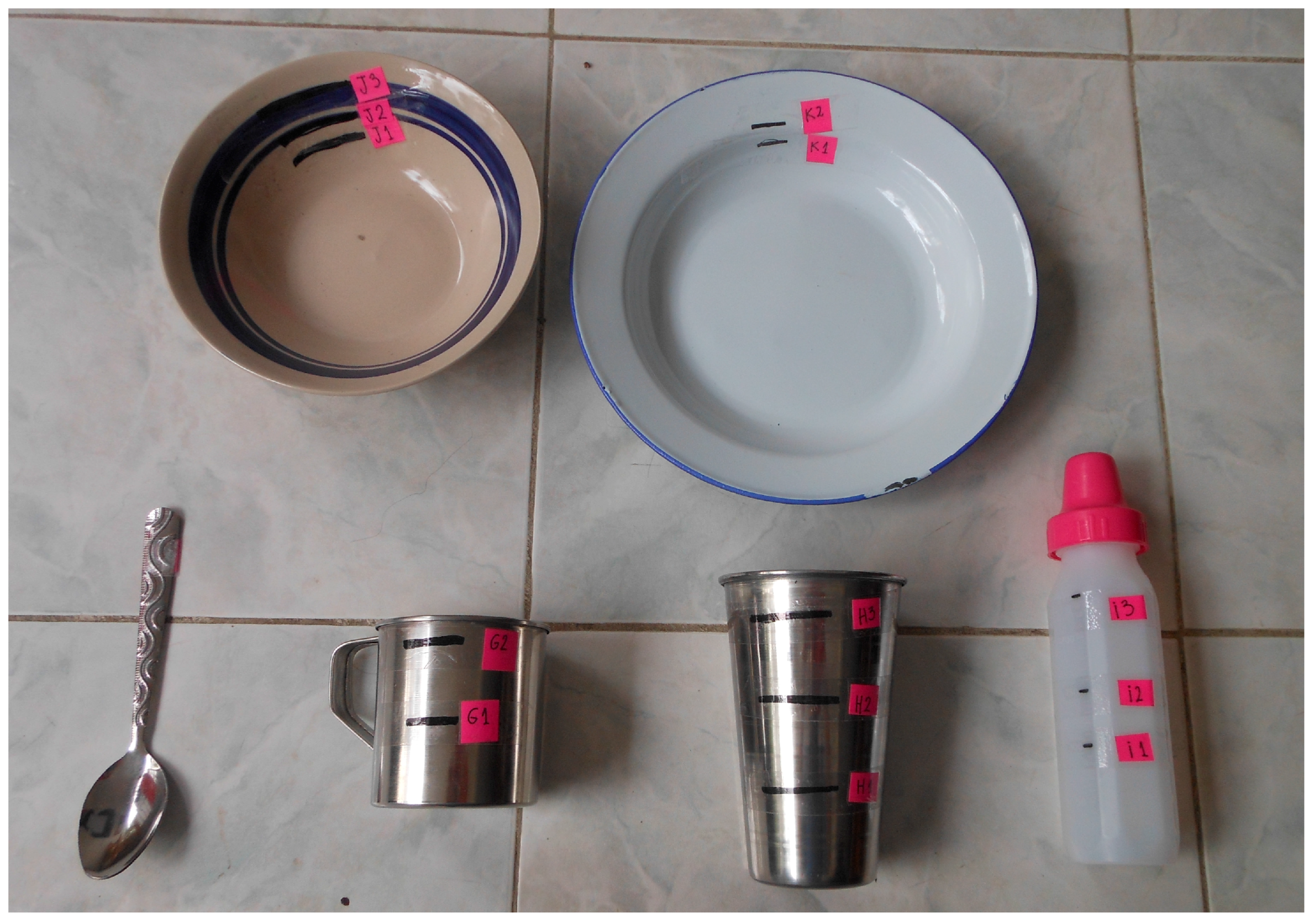 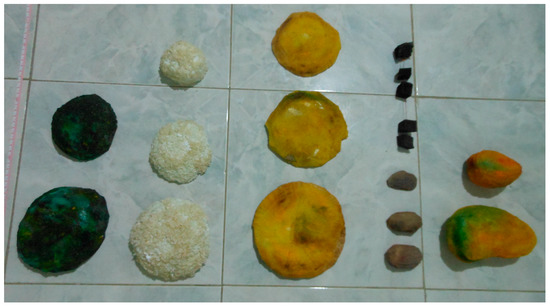 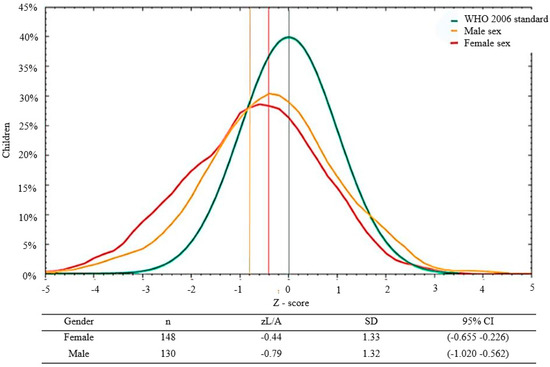 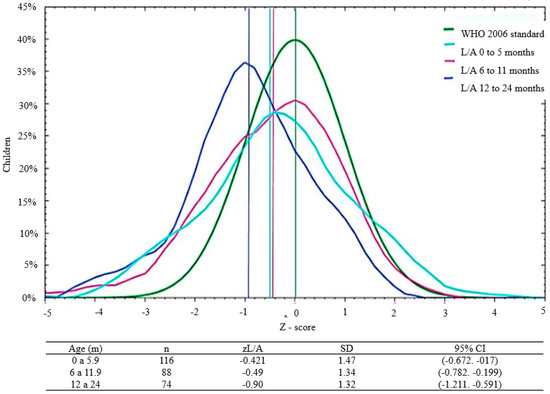 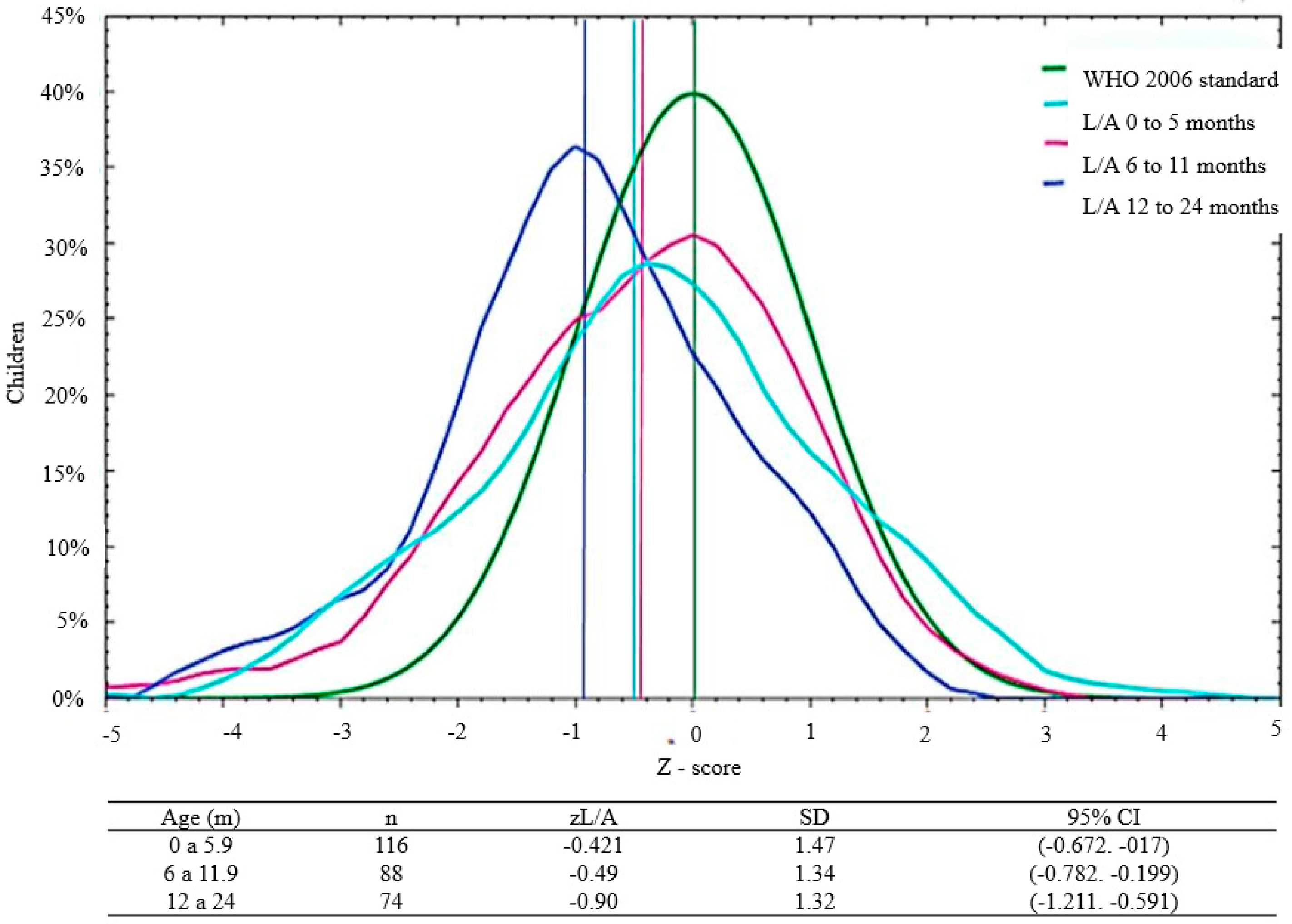 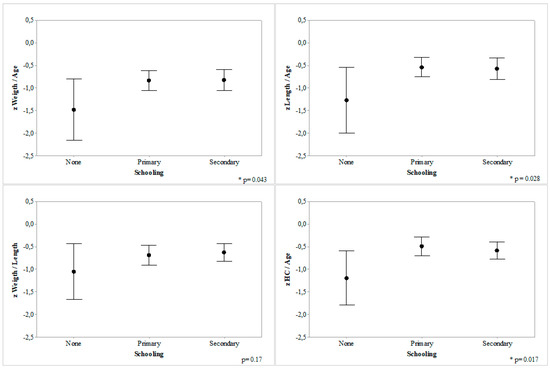 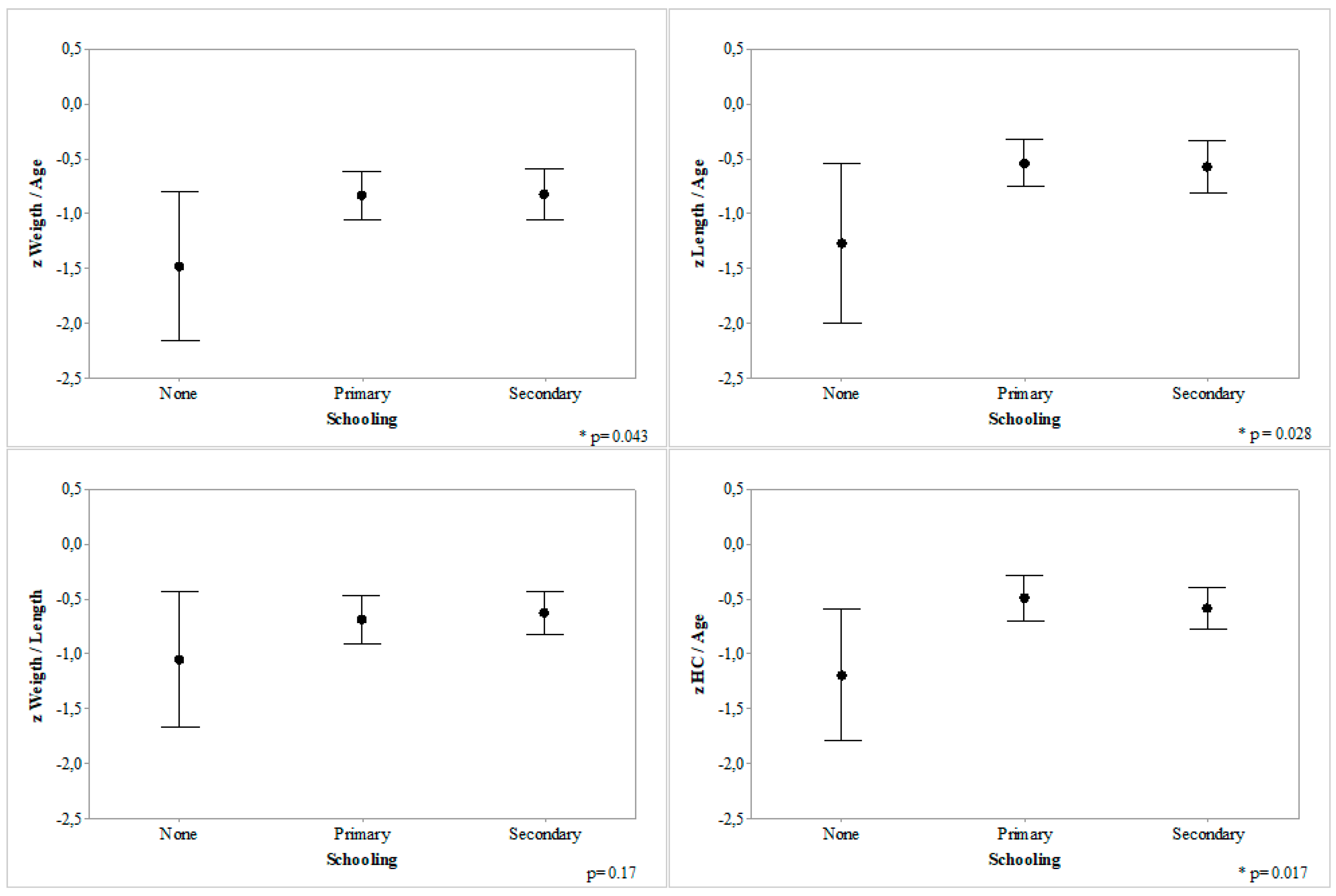 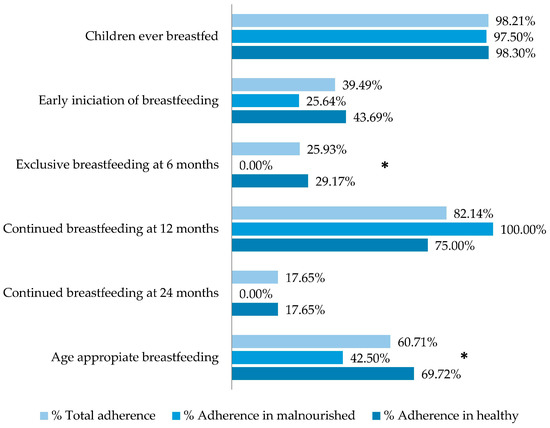 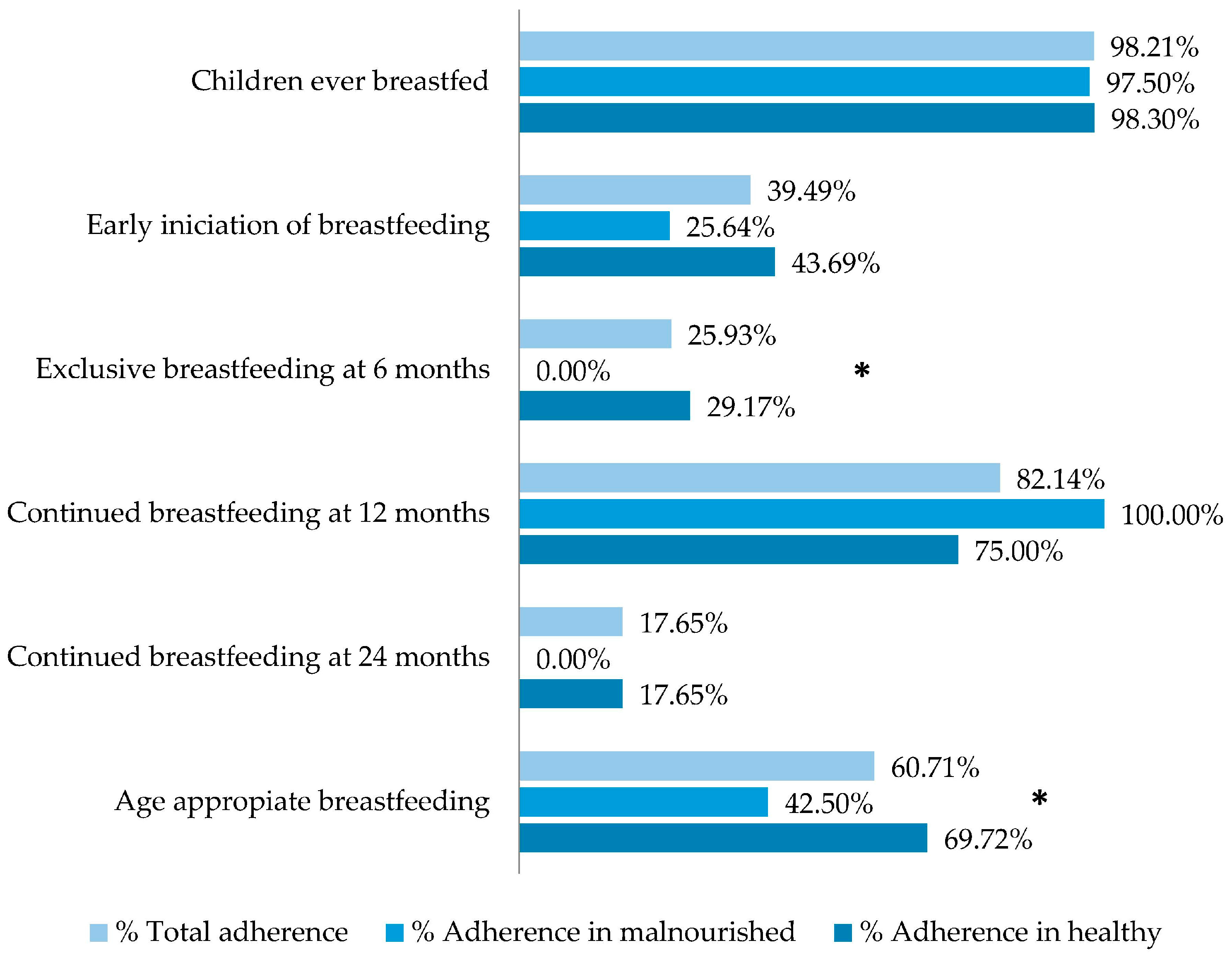 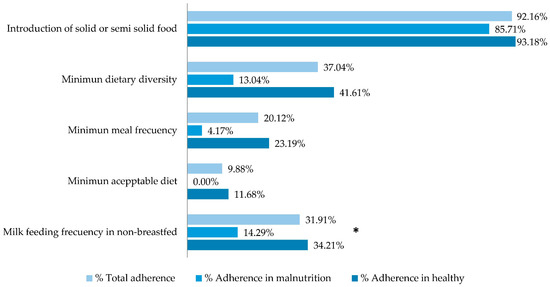 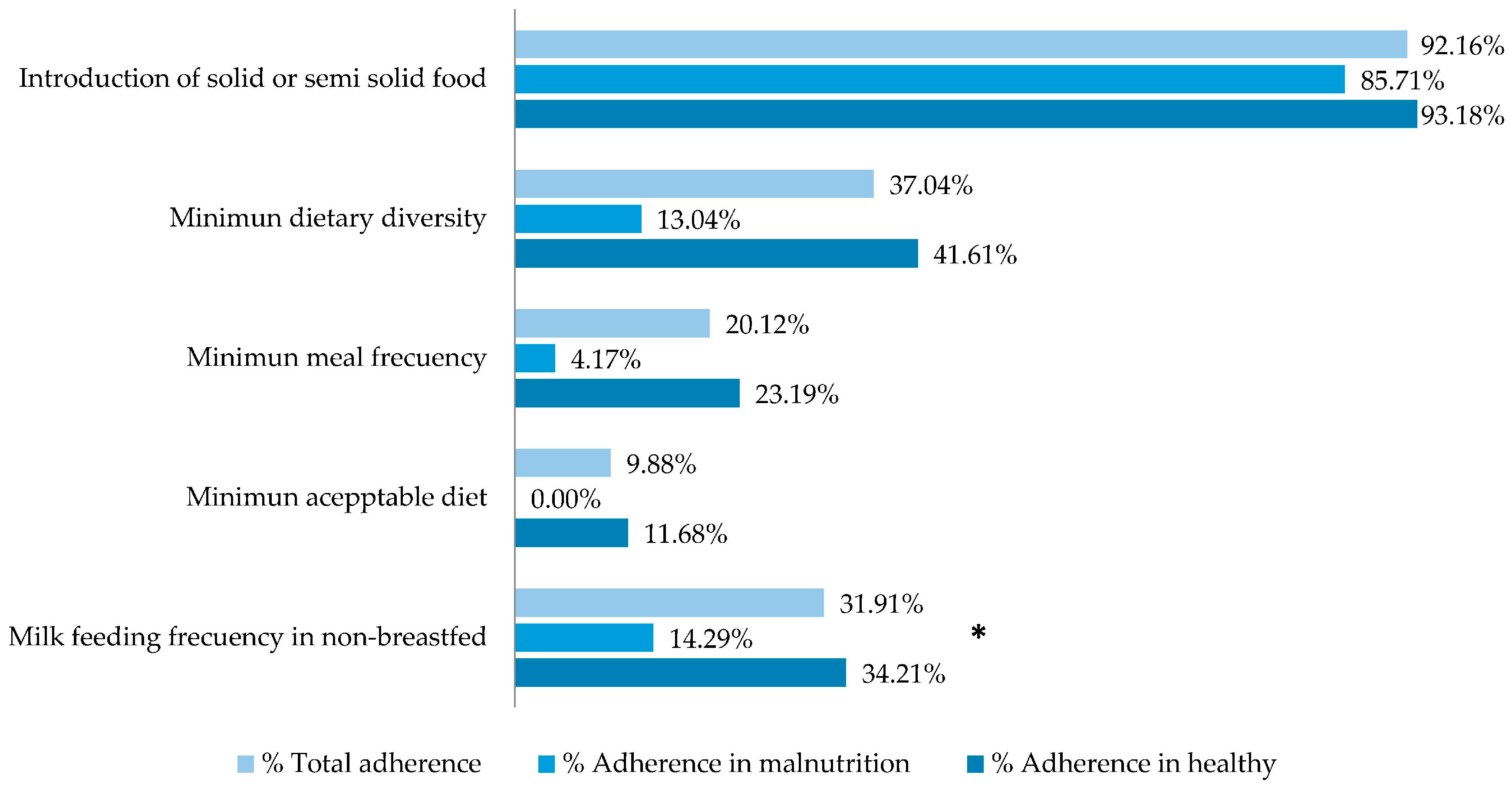