Effect of a Protein Supplement on the Gut Microbiota of Endurance Athletes: A Randomized, Controlled, Double-Blind Pilot Study
Next Article in Special Issue

Effectiveness and Safety of a Probiotic-Mixture for the Treatment of Infantile Colic: A Double-Blind, Randomized, Placebo-Controlled Clinical Trial with Fecal Real-Time PCR and NMR-Based Metabolomics Analysis

Assessment of Mycotoxin Exposure in Breastfeeding Mothers with Celiac Disease

Objective: To assess the risk of mycotoxin exposure (aflatoxin M1, ochratoxin A, and zearalenone) in celiac disease (CD) breastfeeding mothers and healthy control mothers, as well as in their offspring, by quantifying these contaminants in breast milk. Study design: Thirty-five breastfeeding women with CD on a gluten-free diet and 30 healthy breastfeeding controls were recruited. Milk sampling was performed three times per day for three consecutive days. Mycotoxin content was investigated by an analytical method using immunoaffinity column clean-up and high-performance liquid chromatography (HPLC) with fluorometric detection. Results: Aflatoxin M1 (AFM1) was detected in 37% of CD group samples (mean ± SD = 0.012 ± 0.011 ng/mL; range = 0.003–0.340 ng/mL). The control group showed lower mean AFM1 concentration levels in 24% of the analyzed samples (0.009 ± 0.007 ng/mL; range = 0.003–0.067 ng/mL, ANOVA on ranks, p-value < 0.01). Ochratoxin A and zearalenone did not differ in both groups. Conclusion: Breast milk AFM1 contamination for both groups is lower than the European safety threshold. However, the estimated exposures of infants from CD mothers and control mothers was much higher (≃15 times and ≃11 times, respectively) than the threshold set by the joint FAO/WHO Expert Committee on Food Additives (JECFA). Since incongruities exist between JECFA and the European Union standard, a novel regulatory review of the available data on this topic is desirable. Protecting babies from a neglected risk of high AFM1 exposure requires prompt regulatory and food-control policies. View Full-Text
Keywords: celiac disease; mycotoxins; breast milk celiac disease; mycotoxins; breast milk
►▼ Show Figures 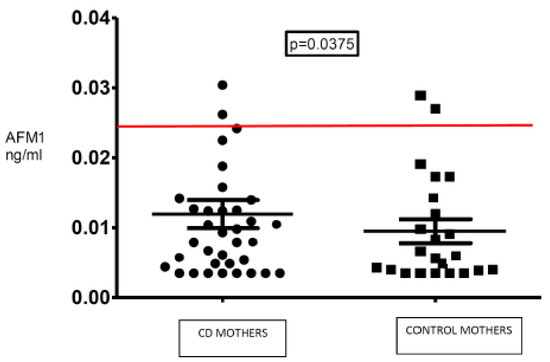