Gender, Age, Race and Lactose Intolerance: Is There Evidence to Support a Differential Symptom Response? A Scoping Review
Previous Article in Journal

Zinc, an essential trace element, has been reported to play various pivotal roles in the human body. Notably, in the liver, zinc is needed for the activation of many enzymes, such as ornithine transcarbamylase (OTC) and glutamate dehydrogenase (GDH), which are utilized in the urea cycle and the glutamine synthetase cycle respectively. Superoxide dismutase (SOD), which requires zinc for its activation, has strong antioxidant activity. Zinc deficiency may cause SOD inactivity, followed by increased reactive oxygen species (ROS). Takeda et al. recently reported that zinc deficiency delays both extracellular adenosine triphosphate (ATP) clearance and adenosine generation, followed by enhanced inflammation [1]. Many roles of zinc, especially in chronic liver diseases (CLDs), were explained by Himoto in a review article [2].
Vallee et al. first reported on the occurrence of marked hypozincemia in patients with severe cirrhosis in 1956 [3]. This finding has been confirmed by many investigators [4,5]. The mechanisms underlying zinc deficiency in patients with CLDs appear to be multifactorial. First, patients with CLDs have inadequate dietary intake of zinc [6]. Second, the absorption of zinc is also impaired in these patients because of portal hypertension [7]. Third, urinary excretion of zinc is increased, and greater excretion has been observed in patients taking diuretics [4,5,8,9]. Based on these results, the serum zinc concentration decreases with the progression of CLDs.
Limited clinical trials have evaluated the effects of zinc supplementation on clinical outcomes in patients with CLDs. As zinc helps activate some enzymes in the urea cycle, many investigators have focused on improving hepatic encephalopathy by administering a zinc supplement. Reding et al. first reported that oral zinc supplementation improved hepatic encephalopathy in 22 patients with cirrhosis in a double-blind randomized trial. The effect of taking zinc acetate, 600 mg a day for 7 days, was evaluated in that study [10]. Katayama et al. also presented the importance of zinc supplementation in a trial showing that treatment with zinc acetate for 3 months was an effective and safe treatment for hyperammonemia in patients with liver cirrhosis [11]. A systematic review and meta-analysis of the use of zinc in patients with hepatic encephalopathy revealed a significant improvement in psychological tests after zinc therapy [12]. However, many of these studies have focused on the short-term administration of zinc. The period of zinc administration was only 7 days in the study by Reding and colleagues, and 3 months in the study by Katayama and coworkers. Few papers have explored the long-term effects of zinc on patients with CLDs. Therefore, the first issue is whether long-term zinc administration improves the long-term prognosis of these patients. The second issue is determining the zinc concentration necessary to improve the prognosis of patients with CLDs [10,11,12]. While all of these reports supported the efficacy of zinc supplementation in patients with CLDs, almost all studies explored the efficacy of zinc by comparing the placebo group with the zinc group; thus, the appropriate plasma zinc concentration after zinc administration to achieve these effects remains unknown.
In the present study, we investigated liver function and the risk of events—death, liver failure and the development of hepatocellular carcinoma (HCC)—after the administration of zinc for more than 3 years, to clarify the long-term effects of zinc. In addition, the incidence rates of events were evaluated among the groups stratified according to their zinc concentrations measured after 6 months of zinc administration. Zinc preparations were approved in 13 February 2018, and they may become valuable drugs for the prevention of cancer.

267 patients with CLDs, who had received a zinc preparation (ZnSO4, Zn 60–120 mg/day; Zn-group; 196 patients) for at least 6 months or who had never received zinc (no Zn-treatment group; 71 patients), were retrospectively analyzed in this study. These patients were initially diagnosed with CLDs at Osaka Rosai Hospital between 1 January 2007 and 31 December 2017. A total of 267 consecutive patients who provided informed consent were recruited in this study. Each doctor decided whether to administer zinc supplements, but some physicians tended to administer them to patients with severe fibrosis. The dose of zinc was determined according to the decision of the primary physician, and did not depend on the clinical situation or disease severity. Patients in the Zn-group were divided into 4 groups according to their Zn concentration at 6 months after the start of Zn treatment—less than 50 µg/dL (G1), 50–69 µg/dL (G2), 70–89 µg/dL (G3), and not less than 90 µg/dL (G4). Liver function and the number of events (death, development of liver cancer, and appearance of liver failure) were evaluated at least every 6 months. The severity of liver disease was assessed based on the Child-Pugh score, and patients were grouped into Class A, B and C according to a total score of 5–6, 7–9 or 10–15. The total bilirubin (T-Bil), albumin (Alb), and prothrombin (PT) values, and the presence/absence of ascites and hepatic encephalopathy, were scored as 1, 2, or 3. A fasting blood sample (3–4 mL) was drawn from each subject in plain, EDTA, and PT vials to perform the following investigations: Aspartate aminotransferase (AST), alanine aminotransferase (ALT), T-Bil, Alb, and branched amino acids/tyrosine ratio (BTR), which were performed on a fully automated analyzer (Olympus AU 400, Olympus Corporation, Tokyo, Japan). The plasma concentration of zinc was assessed on an atomic absorption spectrophotometer (Shino-test Company, Tokyo, Japan). This study was approved by the Ethics and Committee of Osaka-Rosai Hospital (approval code 29–47). All participants provided written informed consent.
The data are presented as the means ± standard error (SE). Data from two groups were compared using unpaired t-tests. Multiple comparisons were performed by ANOVAs with the Scheffe post hoc test. A value of p < 0.05 was considered statistically significant. The log-rank test was used to assess the cumulative incidence rates of events and HCC development.

3.2. Zinc Administration May Suppress the Incidence of HCC

Serum zinc concentration gradually decreases as liver fibrosis progresses, and zinc supplementation suppressed the exacerbation of the disease in patients with CLDs. According to these results, a reduction in zinc levels partially causes the worsening of liver function. In other words, many liver enzymes do not work well because of a zinc deficiency. The importance of zinc in the urea cycle has been elucidated; many investigators have shown that zinc supplementation improves hepatic encephalopathy after short-term treatment (7 days–3 months). Zinc is needed for the activation of not only OTC in the urea cycle, but also many other enzymes, such as DNA polymerase, RNA polymerase, alkaline phosphatase and SOD; thus, researchers have speculated that the administration of zinc may exert a positive effect on liver function and inhibit cancer development. It is difficult to evaluate the influence of zinc supplementation on liver function and the incidence rate of HCC in the short term; therefore, the period of zinc administration and the follow-up period were longer than 3 years in this study, enabling us to address this issue. In the present study, we revealed that supplementation with zinc was effective at maintaining liver function and suppressing HCC. These results are quite interesting. The mechanism by which zinc suppresses the deterioration of liver function and the development of HCC is currently unknown, but three possibilities exist. First, improvement of liver injury is caused by normalization of both extracellular ATP clearance and adenosine generation [1]. Second, SOD activity is restored to the basal level, enabling reductions in the levels of ROS, which can induce epigenetic modulations that lead to carcinogenesis. In support of this hypothesis, we examined the value of dROM, which is a possible marker of ROS [13,14]. In almost all the zinc-treated patients, the value of dROM was significantly decreased after the administration of zinc (unpublished data). Third, the severity of fibrosis is related to the risk of HCC development, and Takahashi reported that the serum levels of type IV collagen and the activity of tissue inhibitors of metalloproteinase-1 (TIMP-1) were significantly reduced by oral zinc supplement therapy [15]. Zinc therapy can suppress the progression of fibrosis, which reduces the risk of HCC development.
It is necessary to determine the serum zinc concentration that is needed after zinc administration to obtain a better prognosis. In this study, we revealed that a serum zinc concentration of 70 µg/dL after zinc supplementation was needed to exert this inhibitory effect on HCC development. Few papers have explored the appropriate serum zinc concentration. Takamatsu reported that serum zinc concentrations greater than 72 µg/dL are needed to suppress fibrosis, based on a study with 57 patients with CLDs [16]. Our results are consistent with this report, and both studies showed that it is important to increase and maintain a certain serum zinc concentration to obtain a better prognosis.
This is the first report to clarify that zinc administration improves liver function and decreases the cumulative incidence of events and the incidence of HCC in patients with CLDs, over the course of long-term follow-up. We also confirmed that a serum zinc concentration greater than 70 µg/dL must be maintained to obtain good clinical outcomes, and patients should take more than 90 mg/day of zinc to achieve the aforementioned serum zinc concentration. The effectiveness does not depend on the etiology of the CLD; thus, zinc administration is equally useful for patients with an HCV infection, HBV infection, NASH, or alcohol-related liver diseases. It is necessary to highlight the importance of zinc and to start administering zinc preparations in the clinical setting.

We are grateful to Shokura H and Izutani Y (our medical assistants) for collecting the large amounts of data analyzed in this study. We also thank Katayama K for providing expertise with regard to zinc. This study was supported by a Grant-in-Aid for Research on Hepatitis from the Ministry of Health, Labor, and Welfare of Japan and the Japan Agency for Medical Research and Development (17fk0210106h0901). 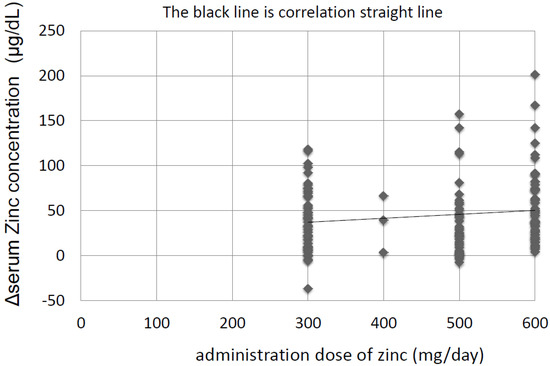 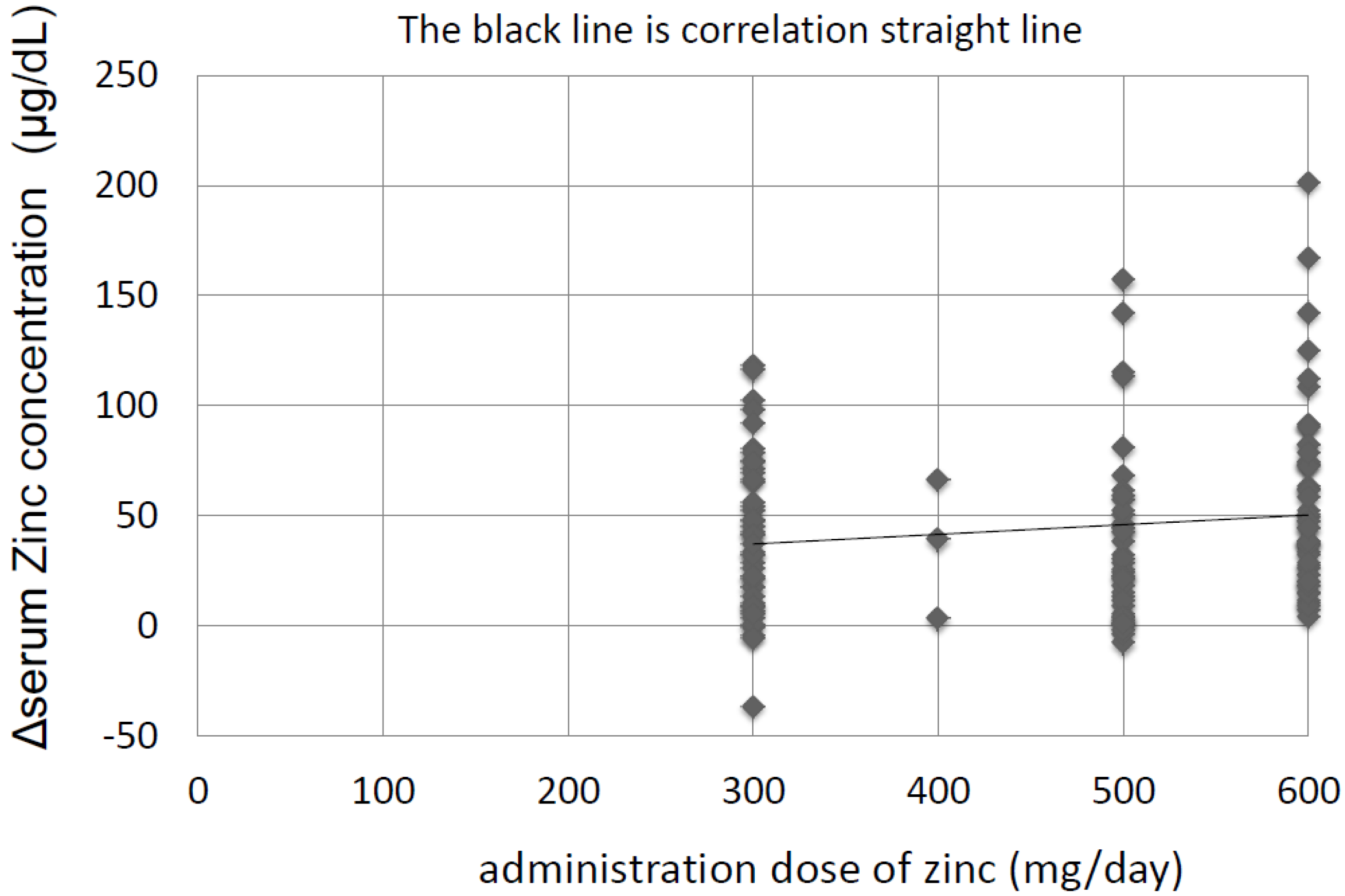 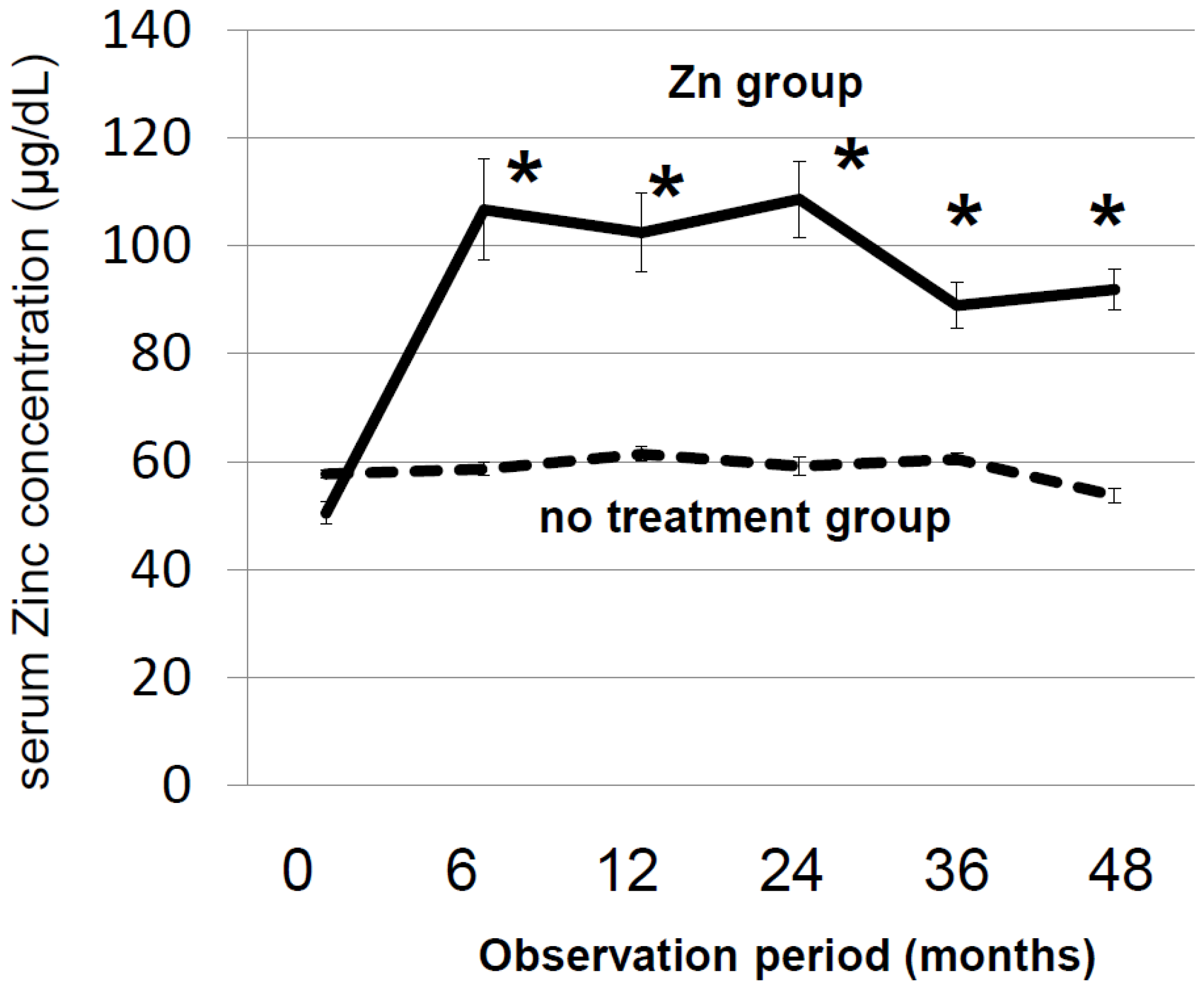 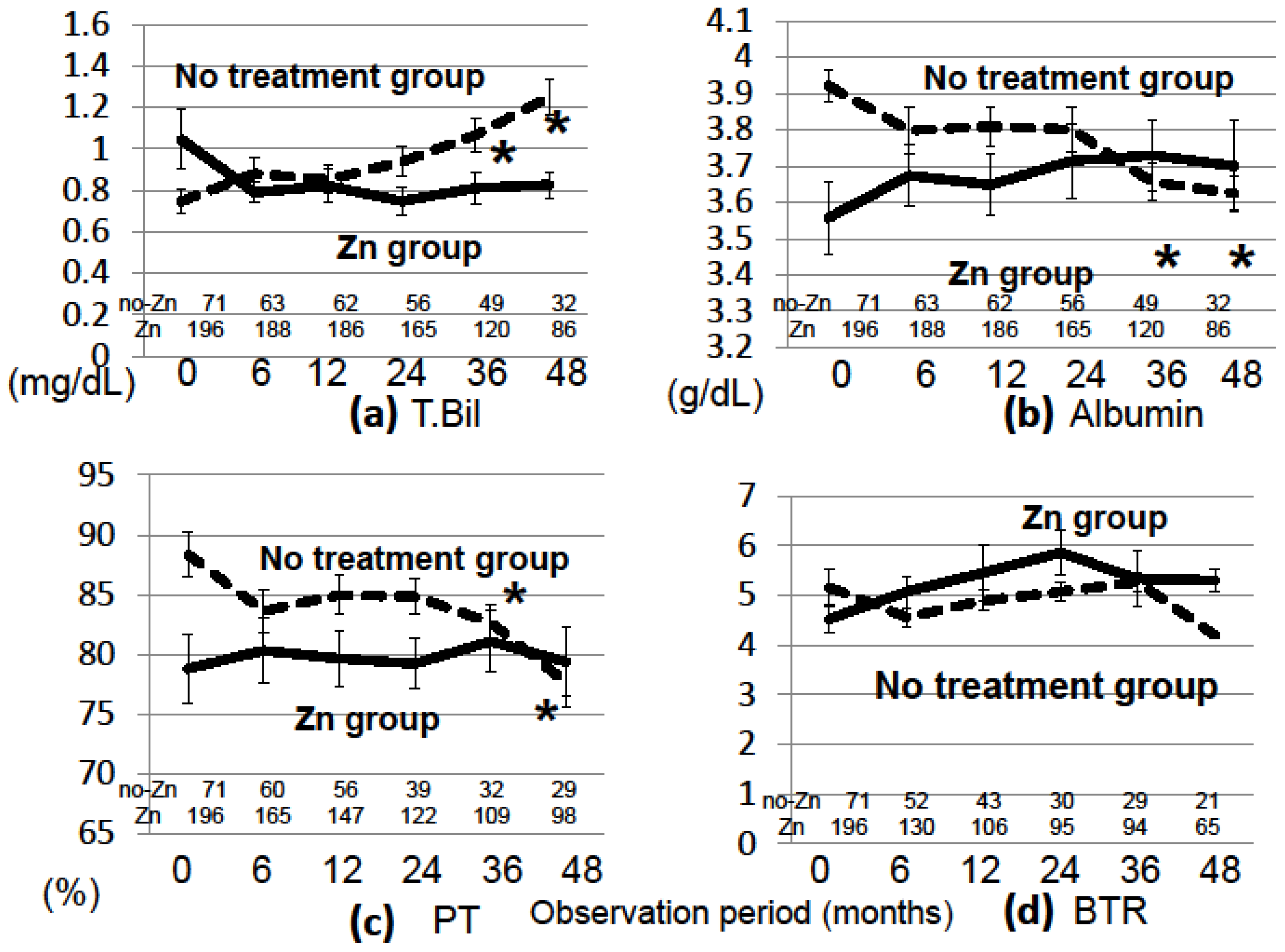 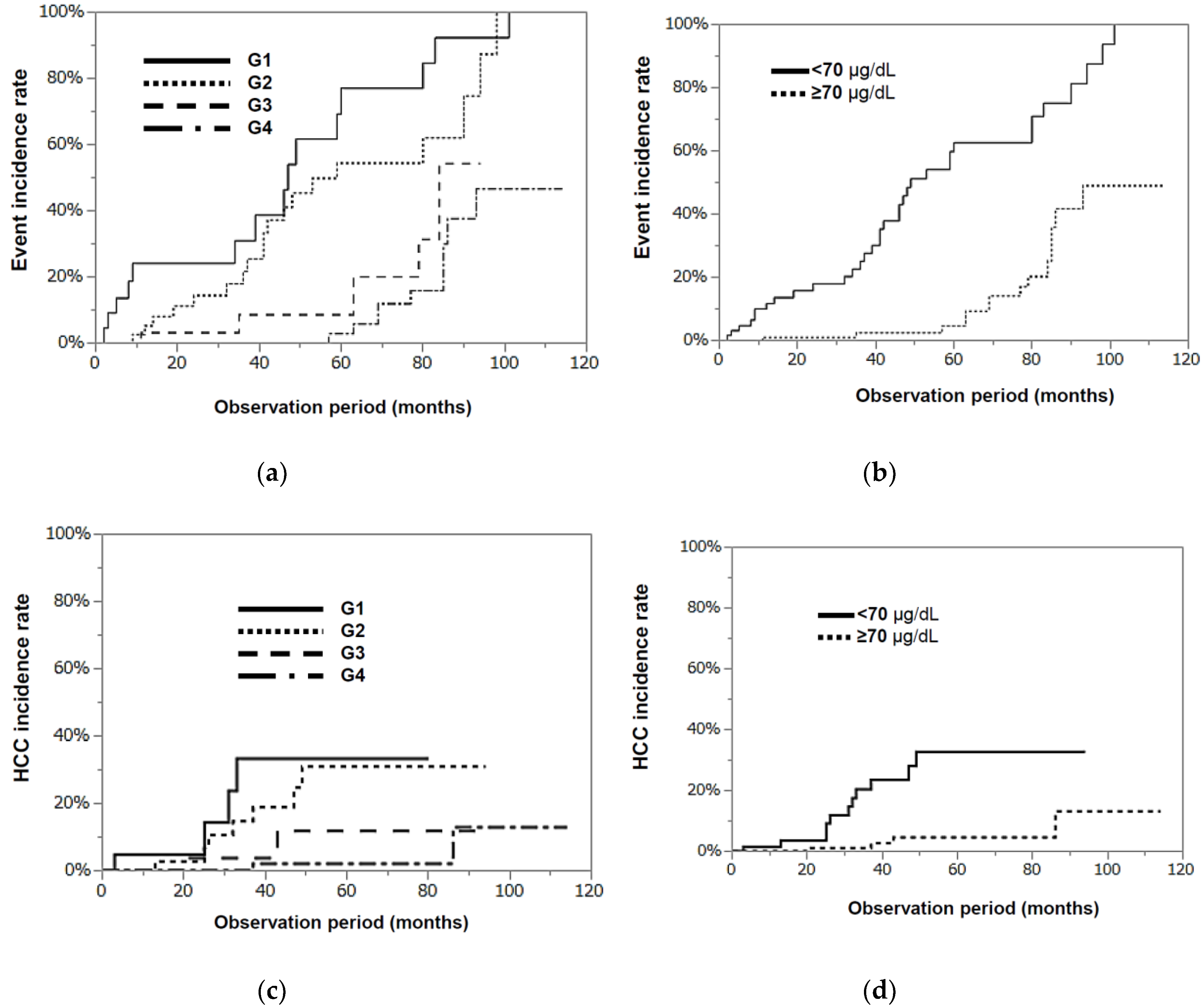