Children with Obesity and Asthma: Which Are the Best Options for Their Management?

The Role of Vitamin D Oral Supplementation in Insulin Resistance in Women with Polycystic Ovary Syndrome: A Systematic Review and Meta-Analysis of Randomized Controlled Trials

Potential studies were identified from February to April 2018 by conducting a systematic search using PubMed (Medline), Scopus, Web of Science, and the Cochrane Library. During this process, we identified publications that describe the effect of vitamin D supplementation (alone or as a co-supplement) on insulin resistance in women with PCOS, without any limitation on the date of study publication or age of study participants.
The following index terms were used: vitamin D OR ergocalciferol OR cholecalciferol OR 25-hydroxyvitamin D 2 OR hydroxycholecalciferol OR calcifediol OR calcitriol OR 24,25-dihydroxyvitamin D 3 OR dihydrotachysterol AND polycystic ovary syndrome OR PCOS AND OR insulin resistance OR diabetes OR fasting insulin OR fasting glucose OR oral glucose test OR OGTT OR homeostasis model assessment ORHOMA-IR OR quantitative insulin sensitivity check index ORQUICKI OR fasting insulin resistance index ORFIRI OR insulinogenic index ORIGI OR hemoglobin A1c OR glycosylated hemoglobin ORHbA1c.
In addition, we also scanned the reference lists of the retrieved articles to identify additional relevant studies. The date of the final search was 30 April 2018.

The following were the inclusion criteria:

The exclusion criteria were as follows:

The data was extracted independently by two reviewers (J.B. and M.J.) based upon the exclusion and inclusion criteria. Publications were assessed according to their titles, abstracts, and full texts in subsequent stages. Doubts were resolved by consensus between reviewers. Each selected publication was studied critically. If the publications included for full-text analysis were not available in the full version, the authors were contacted directly. To assess the study quality, a nine-point scoring system with the Newcastle–Ottawa scale was used. The top score was 9, and a high-quality study was defined by a threshold of at least seven points [30].
Two of the authors (K.Ł., J.B.) independently evaluated the eligibility of all retrieved studies from the databases and extracted the relevant data from each included study. During the data abstraction process, no attempt was made to contact the authors for further information beyond what had been published. Disagreements were resolved by consensus or arbitration. We abstracted the following data from each study: the first author’s name; year of publication; journal name; country; study design; sample size; diagnostic criteria for PCOS; full descriptions of participants enrolled (age, weight, and BMI); the interventions used (type and frequency); the placebo interventions; and the main outcomes—such as serum vitamin D, fasting glucose, fasting insulin, and HOMA-IR.
In our meta-analysis, results from RCTs were also classified by type of dose—low (<4000 IU/d vitamin D) or high dose (otherwise); supplementation frequency (daily or weekly); and type of supplementation (vitamin D alone or as a co-supplement in combination with calcium, vitamin K, zinc, or magnesium).
In assessing the changes in serum 25(OH)D concentrations following vitamin D supplementation, the recommendations of the Endocrine Society were used, as they can be applied to both the general population and groups at risk of vitamin D deficiency [31]. Vitamin D deficiency was defined as a serum 25(OH)D concentrationof20–30 ng/mL, insufficiency as <20 ng/mL, and sufficiency as 30–80ng/mL. However, according to Sempos et al. [32], 25(OH)D values below 12 ng/mL should be considered as being associated with an increased risk of rickets or osteomalacia, while 25(OH)D concentrations between 20 ng/mL and 50 ng/mL appear to be safe and sufficient. The recommendations of the American Diabetes Association (ADA) were used to assess fasting plasma glucose and insulin concentrations [33]. Impaired glucose tolerance (IGT) was defined as a fasting plasma glucose concentration of 100–125 mg/dL. A reference range for fasting insulin of <25 μLU/mL was assumed. The changes in the HOMA-IR index during supplementation were used to assess the alterations in insulin resistance within the studied populations. Following ATP III-Met (Adult Treatment Panel III and the Metabolic Equivalent of Task), we defined the cut-off values of HOMA-IR for the diagnosis of insulin resistance as ≥1.8 [34].

2.6. Assessment of the Risk of Bias in Studies

To assess the methodological quality of the included RCTs, we used the Cochrane risk-of-bias assessment tool to evaluate the randomization performance and methods, allocation concealment, extent of blinding (participants, data collectors, outcome assessors, and data analysis), incomplete outcome data, selective reporting, and other biases. The evaluations were scaled as a low, unclear, and high risk of bias, according to the criteria for judging the risk of bias provided by the Cochrane handbook [35].

Statistical analysis was carried out using Statistica 13.0 software (StatSoft, Tulsa, OK, USA), and the therapeutic effect of vitamin D on the PCOS patients was estimated by the standardized mean difference (SMD) with 95% confidence intervals (CI). The overall SMD was evaluated by the Z-test. Heterogeneity across studies was evaluated using Cochran’s Q-statistic (with p < 0.1 implying a significant difference) and the I2-statistic (with I2 = 0% meaning no heterogeneity and I2 = 100% meaning maximal heterogeneity). A random-effect model was employed when p < 0.1 and I2 > 70%; p > 0.1 meant there was no heterogeneity among the studies, so a fixed-effect model was applied. Publication bias was assessed by a funnel plot. All statistical tests were two-sided, and p values below 0.05 were considered statistically different.

A flow chart of the extraction is presented in Figure 1. Through out the initial search strategy, we identified 348 articles; following analysis of their titles and abstracts section, twenty publications were selected for full-text review. Finally, after the removal of duplicates and publications with insufficient data, 11 RCTs met the inclusion criteria and were included in the final analysis.

3.4. Effects of Vitamin D Supplementation on Changes in Parameters Related to Insulin Resistance

The funnel plots for serum vitamin D and fasting glucose, fasting insulin concentrations, and HOMA-IR indicate that there is a lack of smaller studies showing negative effects of vitamin D supplementation on vitamin D levels and positive effects on fasting glucose, fasting insulin concentrations, and HOMA-IR; this suggests that there is a possible, though minimal, publication bias. However, the number of studies available for each meta-analysis was no more than seven, which may be too small to assess the publication bias through funnel plots (Figure 15A–C).

In conclusion, this systematic review provides evidence that vitamin D co-supplementation among PCOS women is effective in decreased fasting glucose concentration and HOMA-IR treatment. Additionally, HOMA-IR also decreased when vitamin D alone was taken every day (not once a week) and in low doses (<4000 IU/d). 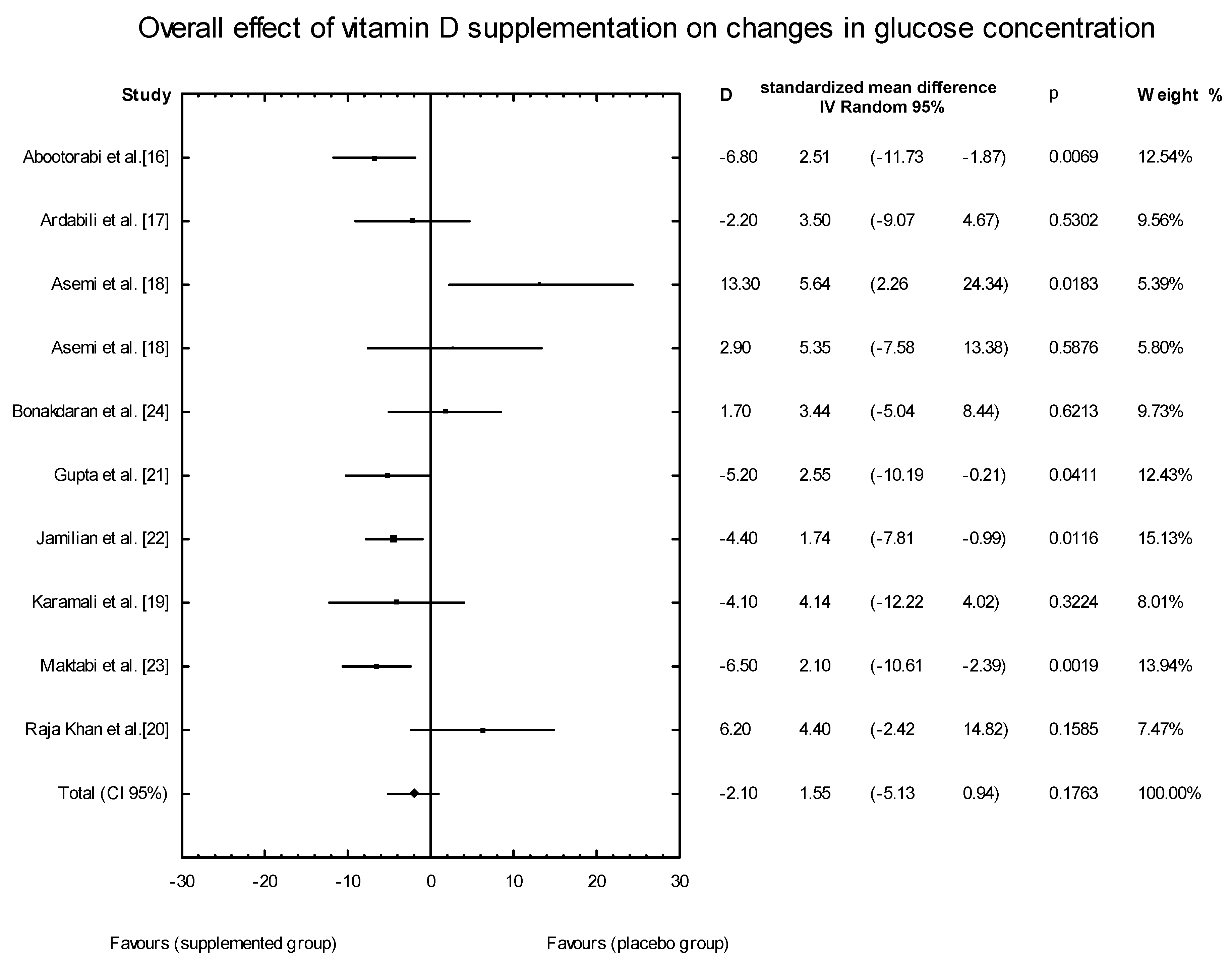 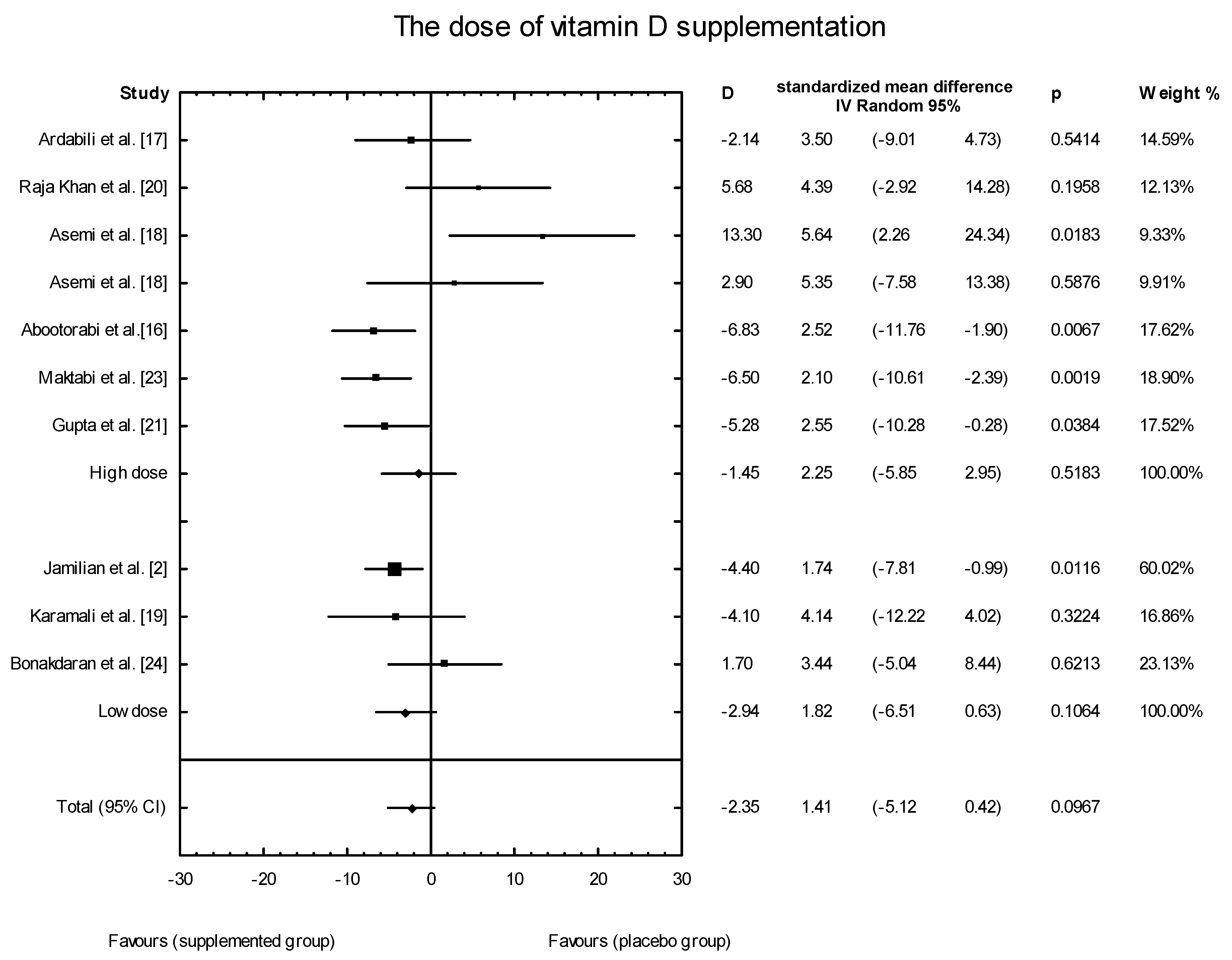 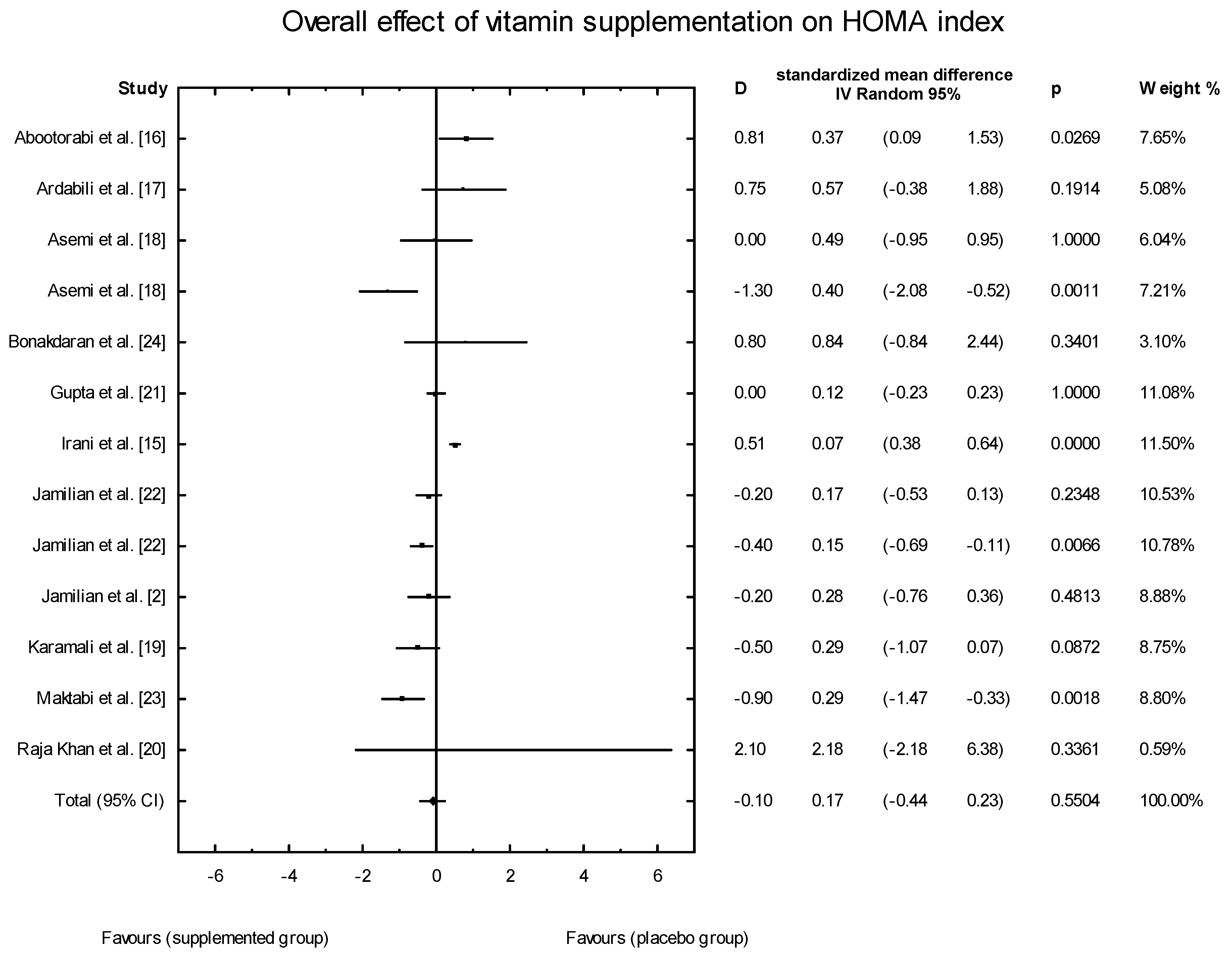 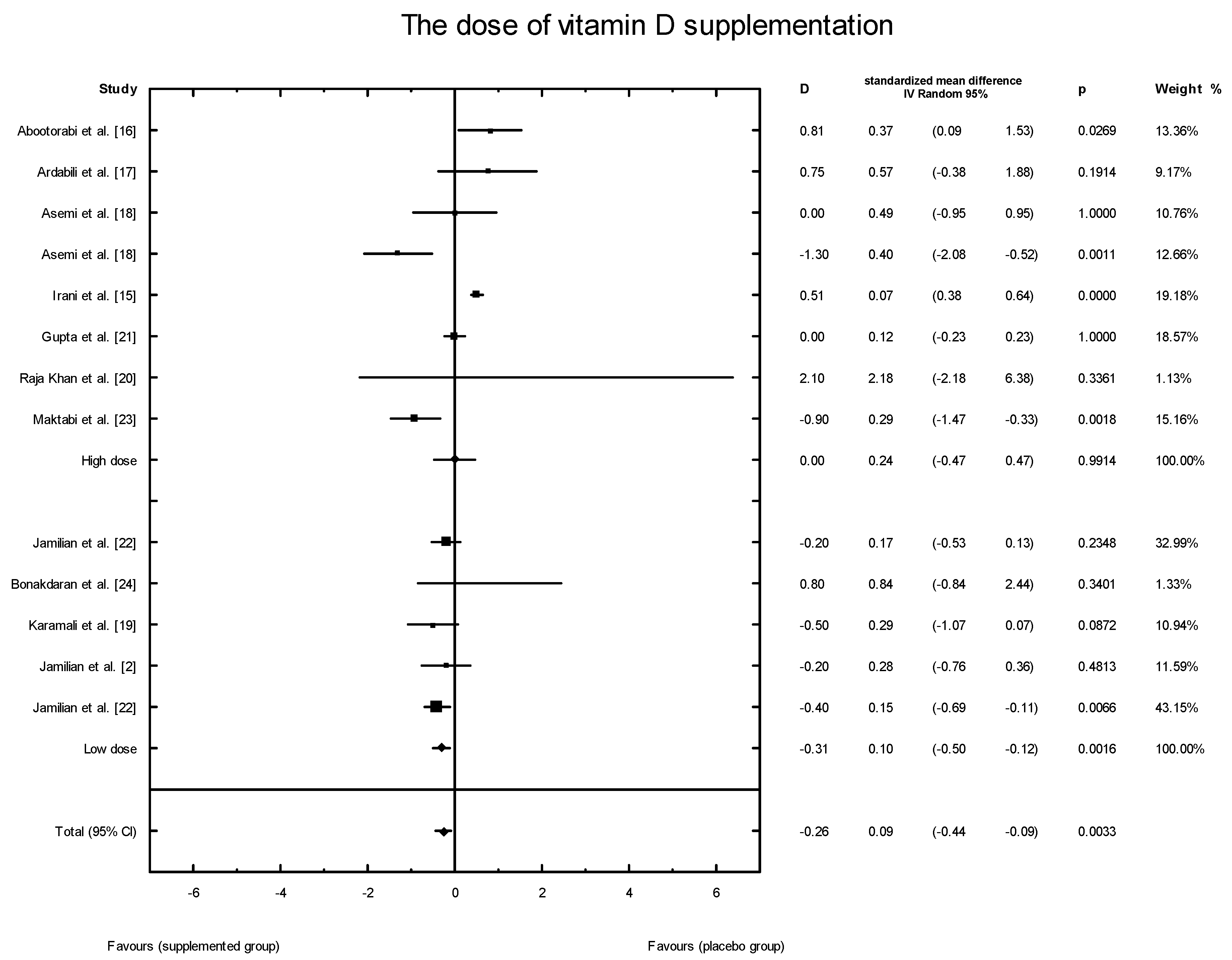 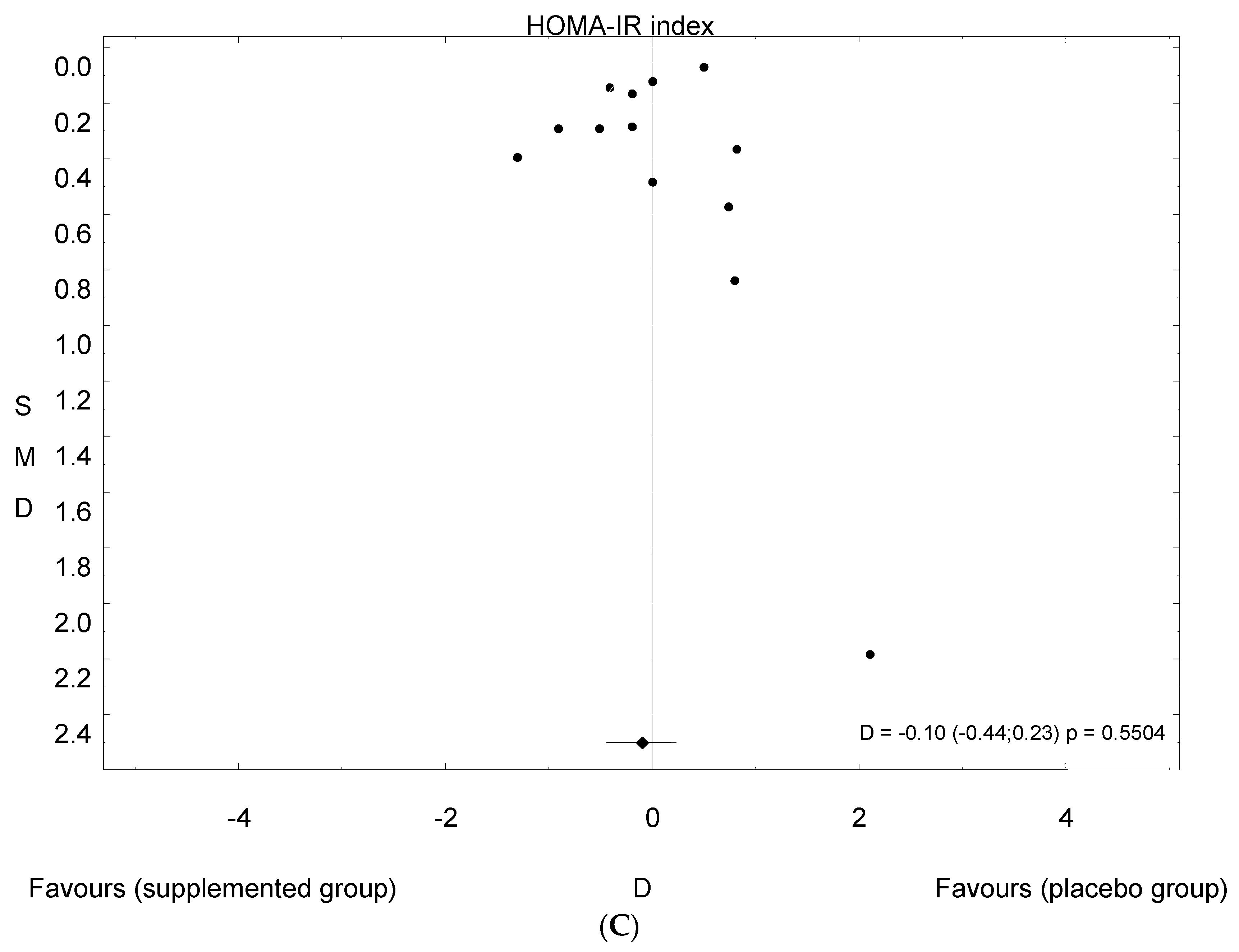