The Combined Effect of Promoting the Mediterranean Diet and Physical Activity on Metabolic Risk Factors in Adults: A Systematic Review and Meta-Analysis of Randomised Controlled Trials
Previous Article in Journal

Circulating Vitamin K1 Levels in Relation to Ischemic Stroke and Its Subtypes: A Mendelian Randomization Study

Obesity is a disease affecting about 40.4% women, 35% men, and 17.0% adolescent and children in the United States [1]. Worldwide adult obesity reached over 650 million in 2016 [2]. Obesity is a well-known risk factor for other chronic diseases, such as type 2 diabetes (T2D), stroke, heart diseases, and cancer [3].
Obesity is a pro-inflammatory condition in which adipocytes enlarge due to excessive fat accumulation and increased secretion of pro-inflammatory molecules by adipose tissue [4]. Adipose tissue is important for energy homeostasis and it functions as an endocrine organ. More than 50 hormones and signaling molecules secreted by the adipose tissue, collectively called adipokines, play biological roles in an autocrine, paracrine, or systemic manner and affects numerous physiological processes regarding energy, glucose metabolism, and immunity [5]. Adipokines are either anti-inflammatory or pro-inflammatory [6]. Anti-inflammatory adipokines secreted from adipose tissue include interleukin 10 (IL-10), and adiponectin [7], and pro-inflammatory adipokines include tumor necrosis factor alpha (TNFα), interleukin 6 (IL-6), interleukin-1beta (IL-1β), and monocyte chemoattractant protein 1 (MCP-1) [7]. The disproportion between the secretion of pro- vs. anti-inflammatory adipokines increases macrophage infiltration into adipose tissue. Adipose tissue macrophages mainly fall into two categories: M1 pro-inflammatory and M2 anti-inflammatory. M1 macrophages increase the production of pro-inflammatory cytokines, such as tumor necrosis factor alpha (TNF-α), IL-6, and MCP-1 [8]. In contrast, M2 macrophages are involved in the increased secretion of anti-inflammatory cytokines, such as IL-10 and type-1 arginase (Arg-1) [9]. Therefore, increased number of M1 macrophages during obesity contribute to increased circulating levels of pro-inflammatory cytokines, which is further involved in the development of insulin resistance [10], where adipocytes and muscle cells reduce their responses to the normal function of insulin [11].
Dietary interventions using natural bioactive food compounds have arisen as favorable therapeutic approaches for obesity, inflammation, and metabolic disorders, with reduced adverse side effects [12,13,14]. Dietary supplementation with flavonoids exerts inflammation and body fat reducing effects [15,16,17]. Tart cherry (TC) (Prunus cerasus) contains the greatest concentrations of anthocyanin flavonoids among vegetables and fruits, including other cherries [18,19]. The total phenolic content of tart cherries (over 300 mg/100 g) is two to three times higher than that of sweet cherries [19,20]. Unlike flavonoid-containing green tea, TC has excellent palatability and familiarity to U.S. consumers due to its popularity in foods, such as pie, pastry fillings and juice products.
Most studies have shown that the consumption of anthocyanin-rich food reduces the development of chronic diseases, including diabetes, cardiovascular diseases, atherosclerosis, arthritis, and cancers [21,22,23,24]. In addition, many in vitro and in vivo studies have also documented the beneficial effects of anthocyanins on lipid metabolism, oxidative stress, inflammation, hyperglycemia, and visceral fat accumulation and insulin signaling [25,26,27,28]. However, many studies have used strawberry, blueberry, and sweet cherry anthocyanin or extracts to reduce such disease conditions, and few studies have documented the effects of TC anthocyanin in adipose tissue inflammation [27,29,30,31]. The objective of this study is to identify the potential anti-inflammatory activities of TC extract rich with anthocyanins in adipose tissue inflammation in obese Zucker fatty rats (OZFR) and cultured 3T3-L1 adipocytes. The OZFR were studied because they are an experimental model of metabolic syndrome [32] that resembles humans with metabolic syndrome. The 3T3-L1 adipocytes were used to further validate the in vivo results and to investigate possible major cellular mechanisms underlying TC regulation of adipose tissue inflammation. Our results discussed below showed that TC reduces adipose tissue inflammation in part via decreased nuclear factor kappa B (NF-κB) activation in both OZFR and cultured 3T3-L1 adipocytes. Additionally, we found fatty acid metabolism effects and anti-oxidant effects of TC in both models, which may indirectly downregulate inflammation.

LC-MS was optimized with standards before running actual samples. Anthocyanin standards were purchased from Sigma Aldrich Company, St. Louis, MO, USA and consisted of Cyanidin Chloride (MW-322.70 g/mol), Keracyanin Chloride (Cyanidin-3-O-rutinoside chloride, MW-630.98 g/mol), Kuromanin Chloride (Cyanidin 3-O-glucoside chloride, MW-484.84 g/mol). (St. Louis, MO, USA). All the anthocyanin standards were dissolved in 80% methanol. Then, standards were further diluted to 100 µM using 0.2% Glacial Acetic Acid, 50% Acetonitrile and water.
Frozen TC were ground using a mortar and pestle. Then, TC juice was filtered using 0.22 µm filter unit. Tart cherry juice was freeze-dried using a vacuum desiccator. To extract anthocyanin, 1 g of freeze-dried tart cherry was dissolved with 10 mL methanol/water/acetic acid (85:15:0.5, v/v/v) and the tube was placed on a rocker at 4 °C overnight in the dark due to the sensitivity of anthocyanins to light. The sample was then vortexed, sonicated, and filtered through a 0.22 µm filter unit. Next, 1 mL of sample was dried for 3 h in the vacuum drier and 20 µL of anthocyanins were dissolved in 100 µL of 0.05% acetic acid and filtered using 3 K filter units (Millipore). Filtrate was re-diluted 10 times with 0.05% acetic acid for LC-MS analysis. The anthocyanin analyzed graph is included in Figure S1.

Secreted pro-inflammatory (IL-6) adipokines in the cell culture media were measured using ELISA cytokine assay according to the instruction of the manufacturer (R&D systems, Minneapolis, MN, USA). Serial dilutions of standards of IL-6 were used to create a standard curve.

The means of in vivo data were analyzed using the student t-test and in vitro data were subjected to analysis of variance (ANOVA), followed by a Turkey’s post-hoc test. In vitro data are means of at least three independent experiments. All statistical analysis was conducted using GraphPad Prism Version 7.04 software. Data are presented as mean ± SEM (standard error of means), with statistical significance considered at p < 0.05.

Overall, there were no significant differences between the average body weight and fat pad weight (p > 0.05) between rats fed with control compared to the TC group (Figure 1a,b).

There was no significant difference in serum metabolic markers at week 8 (p > 0.05) between the control and TC fed group (Table S1).

There were no significant differences in serum pro- (MCP-1) vs. anti-inflammatory makers (IL-10) at week 8 (p > 0.05, Figure 2a,b). In the epidydimal fat, mRNA levels of pro-inflammatory IL-6, TNF-α, MCP-1, and IL-1β were significantly reduced in the TC group compared to the control group (Figure 3a–d, p < 0.05). Among the M1 markers, CD11b and iNOS showed significantly decreased (p < 0.05) expression in the TC group (Figure 3e,f). Moreover, Arg-1 M2 marker showed significantly increased expression in the TC group (p < 0.05) (Figure 3g). Egr-2 M2 marker had no difference in the TC group (Figure 3h).
Next, we analyzed changes of proteins involved in NF-κB pathways, one of the major pathways involved in adipose tissue inflammation. Interestingly, phosphorylation of p-65, the activator of NF-κB, was significantly reduced in epididymal adipose tissue of Zucker fatty rats by TC (Figure 4a; p < 0.05). Also, we measured IKBα, an inhibitor of the NF-κB pathway. However, there was no difference in IKBα protein levels between groups (data not shown). Additionally, we measured proteins involved in the mTOR and AMPK pathways related to inflammation and found no significant differences at protein levels in these pathways (Figure S2). Then, we evaluated the mRNA levels of TLRs to see the involvement of these receptors in the NF-κB pathway. However, TLRs did not show any significant reduction by TC (Figure S3).

As shown in Figure 5, the cell viability increased with the TC concentration, showing that there were no cytotoxic effects of supplementation with TC extract in vitro.

Compared with the control, LPS treatment significantly increased IL-6 secretion in 3T3-L1 cells. Among the used TC concentrations, 3 µL/mL and 4 µL/mL did not show any significant reduction of IL-6 compared to LPS. However, 12, 18, and 24 µL/mL TC concentrations showed a significant reduction (p < 0.05) of IL-6 compared to the vehicle (Figure S4). Among those tested concentrations, we used 12 µL/mL TC to continue our cell culture experiments.
Secretion of IL-6 proteins (Figure 6a) and the expression of IL-6 mRNA (Figure 6b), one of the major targets in the NF-κB pathway, was significantly reduced (p < 0.05) in TC treated 3T3-L1 adipocytes, as we observed in rat adipose tissue mRNA expression of NF-κB (Figure 6c), TNF-α, and MCP-1 (data not shown), which had no significant difference between the TC and vehicle groups. Furthermore, TC significantly reduced phospho-p65 (p < 0.05) in LPS treated 3T3-L1 adipocytes (Figure 6d,e). Similar to the observation in rat adipose tissue, we did not observe any differences in phospho-mTOR and phospho-AMPK protein levels in 3T3-L1 adipocytes treated with TC (Figure S5). Next, we analyzed the involvement of TLRs in the NF-κB pathway. There were no significant differences in the expression of TLR’s (TLR1, 3, 4, 6, and 7) between the TC and vehicle groups (Figure S6).

It has been well documented that anthocyanins possess anti-oxidant activity [37]. In addition to direct anti-inflammatory activities, we found anti-oxidant activities of TC in rat epididymal tissues and in 3T3-L1 adipocytes. For example, we tested the expression levels of NRFs 1, 2, and 3 to see whether TC can decrease the level of reactive oxygen species (ROS) in adipose tissue and adipocytes. Expression levels of nuclear factor erythroid-derived 2-related factor-2 (NRF2) were significantly higher in TC fed rats (Figure 8a; p < 0.05) compared to control, while the expression levels of all the tested NRF genes significantly increased with TC compared to the vehicle in 3T3-L1 adipocytes (Figure 8b–d; p < 0.05).

The authors thank Mandana Pahlavani and Latha Ramalingam for their technical support and advise during execution of this research, and Ruchika Bhawel and Masoud Zabet for helping analyze anthocyanins in tart cherry extracts. A.J.S. was supported by a K01 award from The National Center for Complementary and Integrative Health of the National Institutes of Health under Award Number K01AT006975. The animal study used facilities that are supported in part by a NORC Center Grant (P30DK072476) sponsored by National Institutes of Diabetes and Digestive and Kidney Diseases. 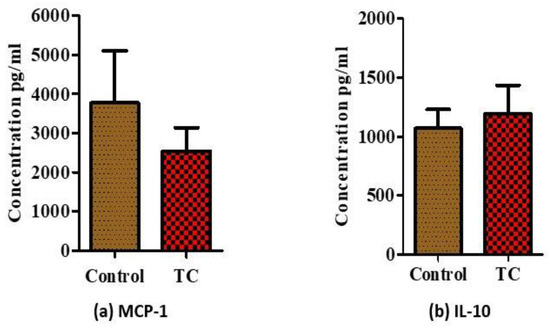 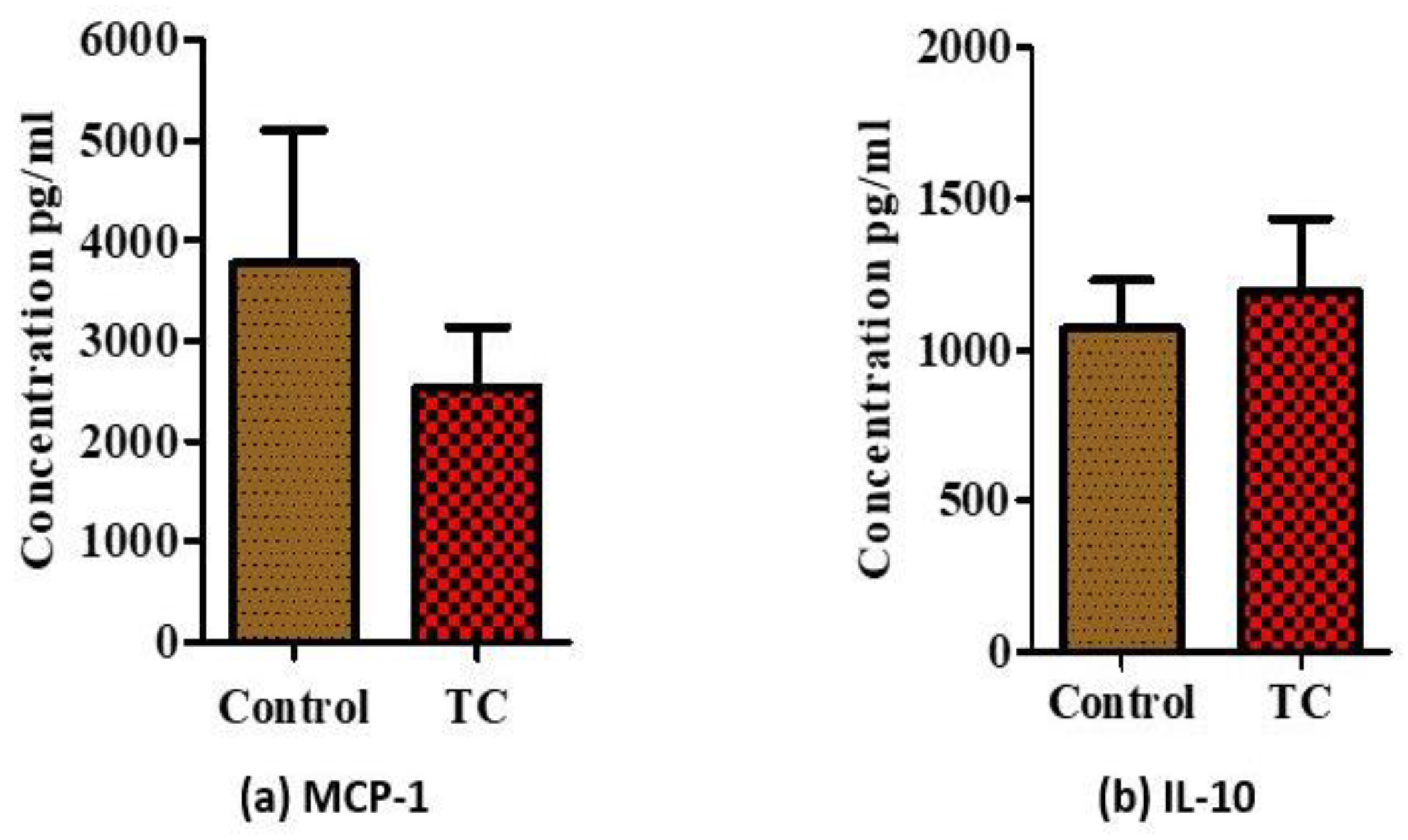 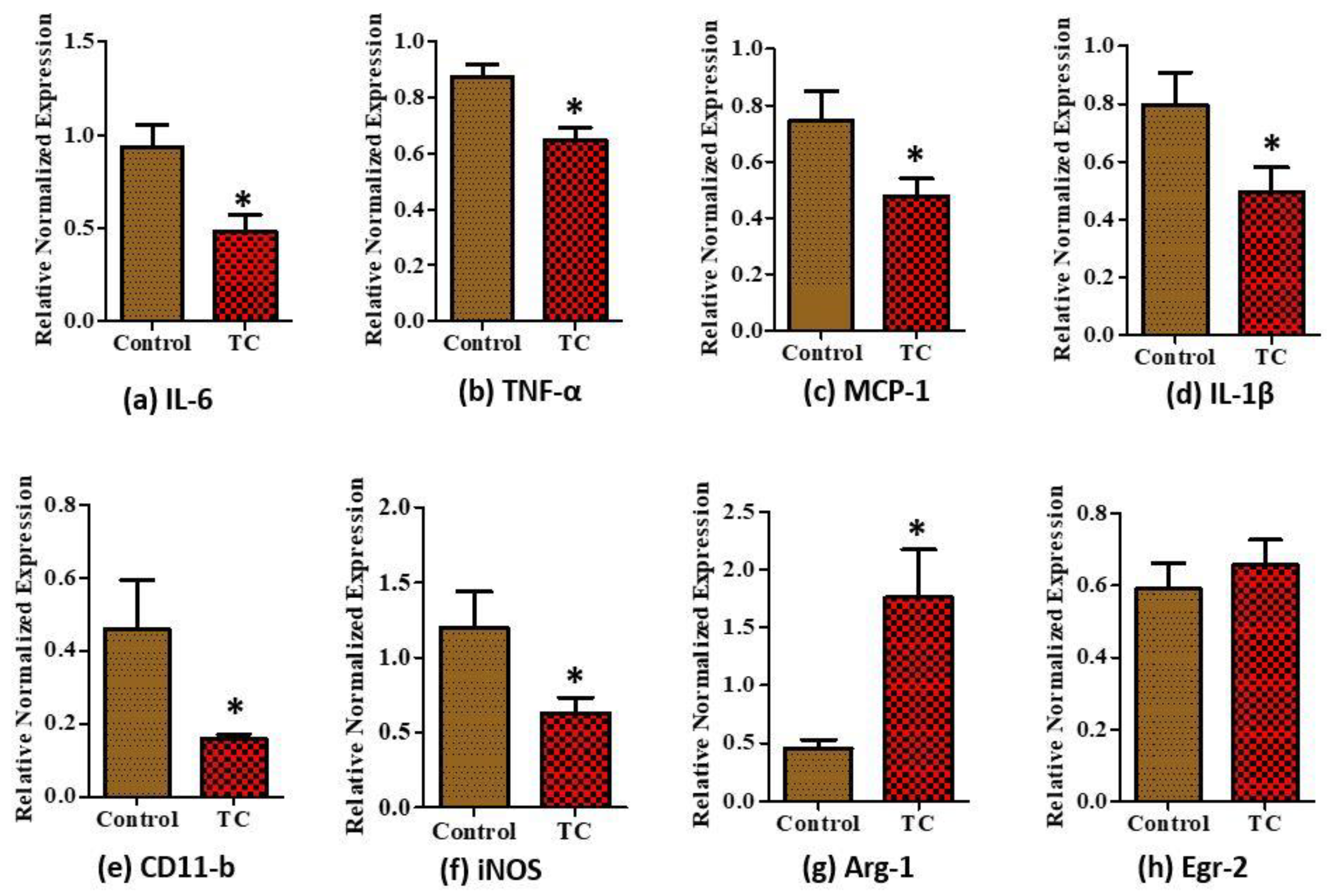 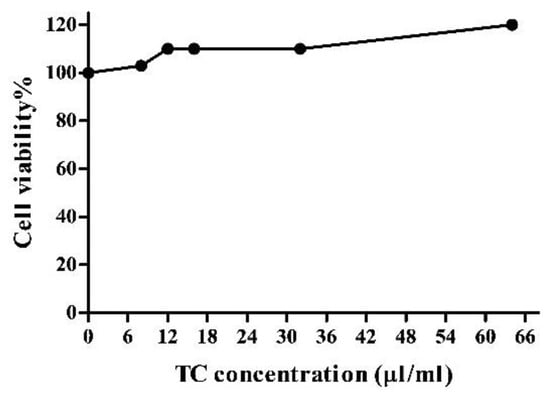 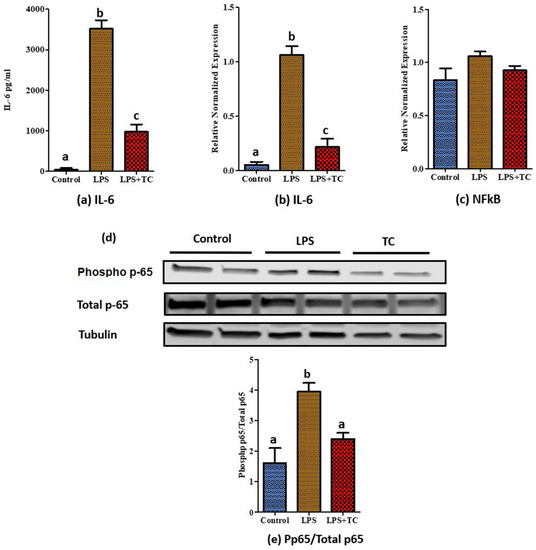 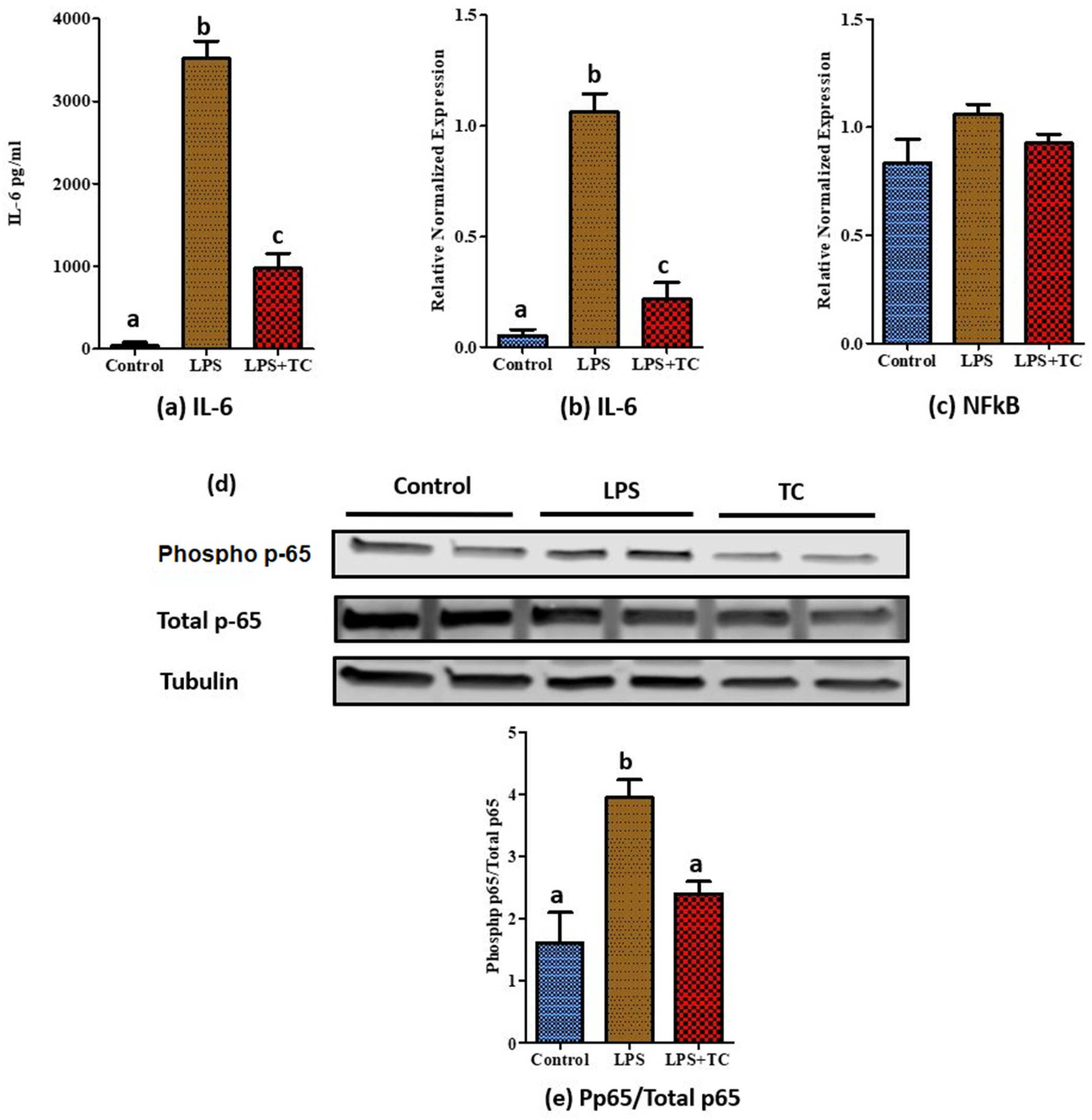 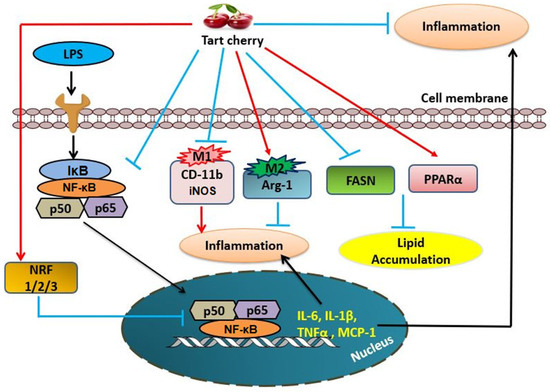