Gender, Age, Race and Lactose Intolerance: Is There Evidence to Support a Differential Symptom Response? A Scoping Review
Previous Article in Journal

Lactose intolerance, characterized by a decrease in host lactase expression, affects approximately 75% of the world population. Galacto-oligosaccharides (GOS) are prebiotics that have been shown to alleviate symptoms of lactose intolerance and to modulate the intestinal microbiota, promoting the growth of beneficial microorganisms. We hypothesized that mechanisms of GOS utilization by intestinal bacteria are variable, impacting efficacy and response, with differences occurring at the strain level. This study aimed to determine the mechanisms by which human-derived Lactobacillus rhamnosus strains metabolize GOS. Genomic comparisons between strains revealed differences in carbohydrate utilization components, including transporters, enzymes for degradation, and transcriptional regulation, despite a high overall sequence identity (>95%) between strains. Physiological and transcriptomics analyses showed distinct differences in carbohydrate metabolism profiles and GOS utilization between strains. A putative operon responsible for GOS utilization was identified and characterized by genetic disruption of the 6-phospho-β-galactosidase, which had a critical role in GOS utilization. Our findings highlight the importance of strain-specific bacterial metabolism in the selection of probiotics and synbiotics to alleviate symptoms of gastrointestinal disorders including lactose intolerance. View Full-Text
Keywords: prebiotics for lactose intolerance; galacto-oligosaccharides; Lactobacillus; probiotics; β-galactosidases prebiotics for lactose intolerance; galacto-oligosaccharides; Lactobacillus; probiotics; β-galactosidases
►▼ Show Figures 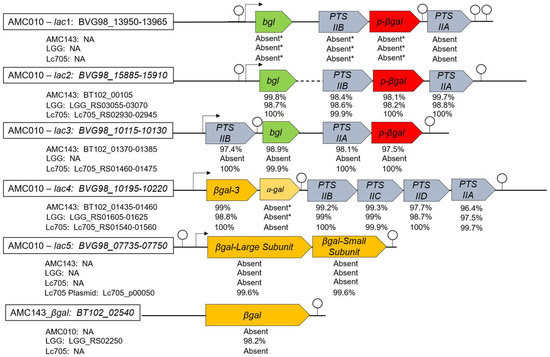