In the present study, two different diameter (small and large) Milano-type dry fermented sausages were industrially produced to evaluate the effect of two different LAB starter cultures (Lactobacillus sakei and Pediococcus pentosaceus) on biogenic amines (BAs) content, proteolysis, and lipolysis taking place during both fermentation and ripening. With regard to BAs, putrescine and tyramine were mostly found in fermented sausages having large diameter and those inoculated with P. pentosaceus/S. xylosus exhibited significantly higher accumulation of these compounds. Overall, the small size sausages showed a more pronounced proteolysis taking place during processing. In addition, aside from the distinctive electrophoretic bands detected with both starter cultures, a more pronounced proteolysis and a faster protein hydrolysis was observed in salami inoculated with P. pentosaceus/S. xylosus. As for lipolysis, a significantly higher amount of diacylglycerols was observed at the end of ripening in the sausages inoculated with L. sakei/S. xylosus, which concurrently exhibited an increased D32, D34, and D36 series. The results of the present study confirms profound differences in BAs concentration, proteolysis, and lipolysis. These findings are strictly dependent on the starter cultures, which demonstrates that the choice of an appropriate starter optimized for peculiar products and processes should be the key factor to improve safety and quality features of traditional fermented sausages. View Full-Text
Keywords: fermented meat; starter cultures; biogenic amines; sausage size; proteolysis; lipolysis fermented meat; starter cultures; biogenic amines; sausage size; proteolysis; lipolysis
►▼ Show Figures 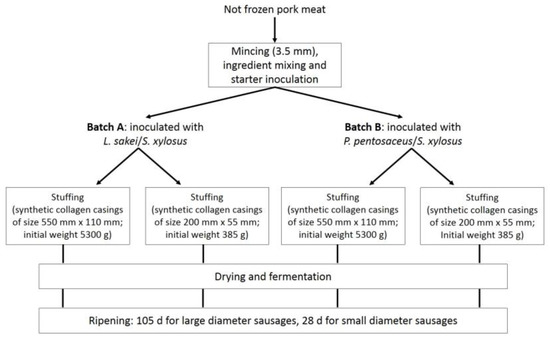