Zinc Status and Autoimmunity: A Systematic Review and Meta-Analysis

Zinc is an essential trace element for living organisms and their biological processes. Zinc plays a key role in more than 300 enzymes and it is involved in cell communication, proliferation, differentiation and survival. Zinc plays also a role in regulating the immune system with implications in pathologies where zinc deficiency and inflammation are observed. In order to examine the experimental evidence reported in the literature regarding zinc levels in the body of patients with autoimmune disorders compared to control individuals, a systematic review and meta-analysis were performed. From 26,095 articles identified by literature search, only 179 of them were considered potentially relevant for our study and then examined. Of the 179 articles, only 62 satisfied the inclusion criteria. Particularly for Fixed Model, Zn concentration in both serum (mean effect = −1.19; confidence interval: −1.26 to −1.11) and plasma (mean effect = −3.97; confidence interval: −4.08 to −3.87) samples of autoimmune disease patients was significantly lower than in controls. The data presented in our work, although very heterogeneous in the manner of collecting and investigating samples, have proved to be extremely consistent in witnessing a deficiency of zinc in serum and plasma of patients compared to controls.
Keywords: zinc; autoimmunity; meta-analysis; multiple sclerosis; type 1 diabetes; rheumatoid arthritis zinc; autoimmunity; meta-analysis; multiple sclerosis; type 1 diabetes; rheumatoid arthritis

Zinc is an essential trace element for living organisms and their biological processes [1,2]. The body cannot accumulate zinc and it is, therefore, essential to take this element consistently in the diet. Although dietary zinc levels vary substantially, eukaryotic cells need to maintain intracellular zinc homeostasis to ensure its proper function. This homeostasis is regulated in mammals by import and export processes, vesicle retaining zinc (zincosomes) and association to metallothioneins (MTs) [3,4]. Zinc plays a key structural or catalytic role in more than 300 enzymes and is involved at all levels of cellular signal transduction. Zinc is involved in cell communication, cell proliferation, differentiation and survival. Therefore, zinc also plays a key role in regulating the immune system, both innate and adaptive, with consequent implications in pathologies where zinc deficiency and inflammation are observed.
The understanding of zinc’s importance in human health unfortunately begun only in the 1960s. Zinc deficiency is associated with a decline in the immune system, with inflammation leading to chronicity [5]. In addition, dietary zinc deficiency was considered to be very rare, although it affects 20–25% of the world’s population [6,7]. Data from the World Health Organization [8] report that zinc deficiency is the fifth largest health risk factor in developing countries and the eleventh in the world [9]. Rarely is zinc deficiency seen as a serious deficit; more frequently it is seen as a less accentuated deficit. Patients with severe deficits present: lymphopenia, decreased ratio between T helper (Th) to cytotoxic T cells, reduced natural killer (NK) cell activity, and increased monocytes cytotoxicity. This condition characterizes the malabsorption autosomal recessive syndrome, Acrodermatitis enteropathica, due to a mutation of a zinc-importing protein, ZIP4 [10].
Less accentuated zinc deficiency states can be caused by nutritional deficits due, for example, to a diet high in lignin and phytates, in vegetarians and vegans, chelating zinc, so preventing its proper absorption [11,12]. This state is characterized by slight weight loss, rough skin, oligospermia and hyperammoniaemia [13].
Several clinical trials of zinc supplementation have been conducted in patients with zinc deficit suffering from various pathologies (viral, bacterial and parasitic infections or autoimmune diseases) [14], or as vaccine supplements [15]. Although there is countless evidence supporting the fact that controlled zinc supplementation can prevent chronic inflammation and other zinc deficiency-related illnesses, or even improve symptoms (as seen in both humans and animal models), to date zinc supplementation does not fall into commonly used medical practices in risk subjects/populations. The purpose of this study was to examine the experimental evidence reported in the literature over the last 40 years regarding zinc levels in the body of patients with autoimmune disorders compared to control individuals. The biological matrices for which it was possible to collect enough bibliographic material to perform a meta-analysis were predominantly serum and plasma; to a lesser extent data were collected on urine, hair and spinal fluid.

In order to select the included studies, a literature search was undertaken of PubMed, Cochrane Central Register of Controlled Trials, Web of Science and Science Direct databases from inception to 23 January 2017 and without any limitation of on year of publication. Keywords used were zinc and ((dietary or supplement) or (serum or plasma)) and (autoimmune disease or autoimmunity). Typing, in the search window, the keywords in the databases chosen, without any restrictions, the result was a list of publications for which only the title, authors and abstracts were available. After eliminating the duplicates the titles and abstracts of the remaining articles were read and those not relevant for the purpose of this meta-analysis were excluded. After this step, the entire manuscript of each remaining paper, defined as eligible, was read, thus excluding those that did not fall within the criteria defined in the “study eligibility criteria” (Section 2.3, below). Finally, the papers that satisfied all selection criteria have been included in the meta-analysis.
Full search details for all databases are presented in Table S1 (Supplemental Material). This study was performed according to Preferred Reporting Items for Systematic reviews and Meta-Analyses (PRISMA) requirements [16,17]. The standard flowchart, which describes the process selection, is reported in Figure 1.

All reference lists were downloaded for elimination of duplicates. Furthermore, title and abstract of each reference were screened by two independent reviewers to perform the eligibility assessment of full text for this review. Study eligibility was restricted to human studies and English language.

Observational studies, prospective and retrospective studies, case-control studies or randomized controlled trials (RCTs) investigating the relationship between zinc status and autoimmune diseases were eligible for inclusion. In particular, only diseases for which the autoimmunity was a franc condition were included in this study. The American Autoimmune Related Diseases Association (AARDA) [18] was consulted to verify that the diseases considered in this study were really autoimmune diseases.
The studies were selected if zinc concentration in biological samples or dietary/supplemental zinc were an index of zinc status.
Moreover, the presence of both number of subject involved (≥5) and the statistical parameters were taken into account for the meta-analysis process. On the other hand, letters, conference proceedings, reviews, duplicated data, data of both animal and cellular studies, and studies that did not indicate data of interest were excluded. Although studies on animals are not considered eligible for the meta-analysis process, a discussion on them was performed separately. Also, thirteen studies were excluded because we did not have access to the full text, maybe the most of these studies were published more than 20 years ago.

The Newcastle-Ottawa Scale (NOS) for case-control studies was used to assess the quality of the included studies [19]. Ten full-text studies were excluded because control data was not complete in reference to both number of controls and their relationship with cases. Two independent reviewers extracted data from each eligible study. The data extracted included the type of study (observational studies, prospective and retrospective studies, case-control studies, randomized controlled trials), country, year of publication, sample size, age and sex of patients, autoimmune disease, zinc status in biological samples, type of samples, method of samples analysis, statistical method, standard deviation and statistical significance.
Table 1 reports the general characteristics of selected studies included in meta-analysis in reference to serum samples whereas Table 2 indicates the baseline characteristics for meta-analysis related to plasma samples. Furthermore, Table 3 reports the general information about the studies that are related to hair, urine and Cerebral Spinal Fluid (CSF) samples.
In most of the included studies, the measurement unit of the zinc concentration data were different for the same biological media. For this reason, all data of zinc in both serum and plasma samples were converted in μg/mL, whereas zinc data in hair samples were converted in μg/g.

From 26,095 articles identified by literature search, 21,766 duplicates were deleted. After the screening of 4329 remaining articles, 4150 of them were excluded because they were irrelevant for our study. Afterwards, 179 papers were considered potentially relevant for our study but only 62 of them satisfied the inclusion criteria (see Section 2.4). Therefore, 117 articles were excluded and the reasons for their exclusion is shown in PRISMA diagram (Figure 1). In particular, 13 of the 117 papers were excluded because, with the means available to the Italian library system, it was not possible to retrieve them. However, the 13 papers are listed in Table S2 (Supplemental Material).

The relationship between Zn status and autoimmune diseases has been investigated by many authors since the 1970s. The 62 studies included in the meta-analysis were case-control studies. Also, all of them were published between 1975 and 2017 and they are related to different autoimmune diseases. Indeed, 22 studies describe the zinc status in Type 1 Diabetes (T1D), 18 full-text are related to Rheumatoid Arthritis (RA), 7 articles investigated zinc status in Multiple Sclerosis (MS) patients while 15 papers are related to other diseases among which Alopecia Areata (AA), Systemic Lupus Erythematosus (SLE), Pemphigus Vulgaris (PV), Autoimmune Hepatitis (AH), Celiac Disease (CD), Hashimoto Thyroiditis (HT), Sjogren’s syndrome (SS), Juvenile Idiopathic Arthritis (JIA).

As already seen for serum, also in plasma samples the meta-analysis results show that, for all models, Zn concentration in the serum of autoimmune disease patients was significantly lower than controls. Indeed, for 62% of the articles included in the meta-analysis process, patients had lower zinc concentrations than controls.
As shown in Figure 3, only FE model overall estimates effects could be considered favorable (FE: mean effect = −3.97 and confidence interval: −4.08 to −3.87). Even in this case, as in the previous one, data was highly heterogeneous.

In reference to Zn hair concentration, only FE model overall estimates effects could be considered favorable (FE: mean effect = −2.49 and confidence interval: −2.72 to −2.28). However, heterogeneity was considerable and the number of studies was limited. On the other hand, no significant variations in urinary and CSF zinc were observed between patients and controls.

To evaluate the presence of publication bias, Funnel Plots were calculated. As shown in Figure 4, in both meta-analysis related to serum Zn and plasma Zn, it is possible to observe the presence of bias in the selected literature.

The following are available online at https://www.mdpi.com/2072-6643/10/1/68/s1. Table S1, Full search details for all databases; Table S2, List of the 13 papers excluded because not possible to retrieve with the means available to the Italian library system; Figure S1, (a) Temporal distribution of the 62 publications included in the meta-analysis; (b) Temporal distribution of publications related to the most frequent pathologies.

We wish to thank the very kind staff of the Biomedical-Scientific District Library of the University of Cagliari for having worked hard to find publications to which we had no direct access. We thank Silvia Cosentino for kindly reviewing the grammar and syntax of the manuscript. 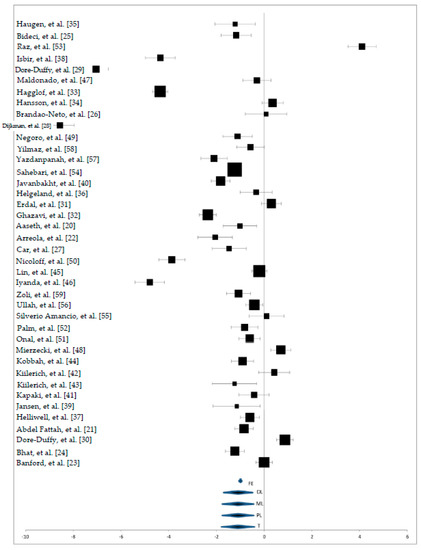 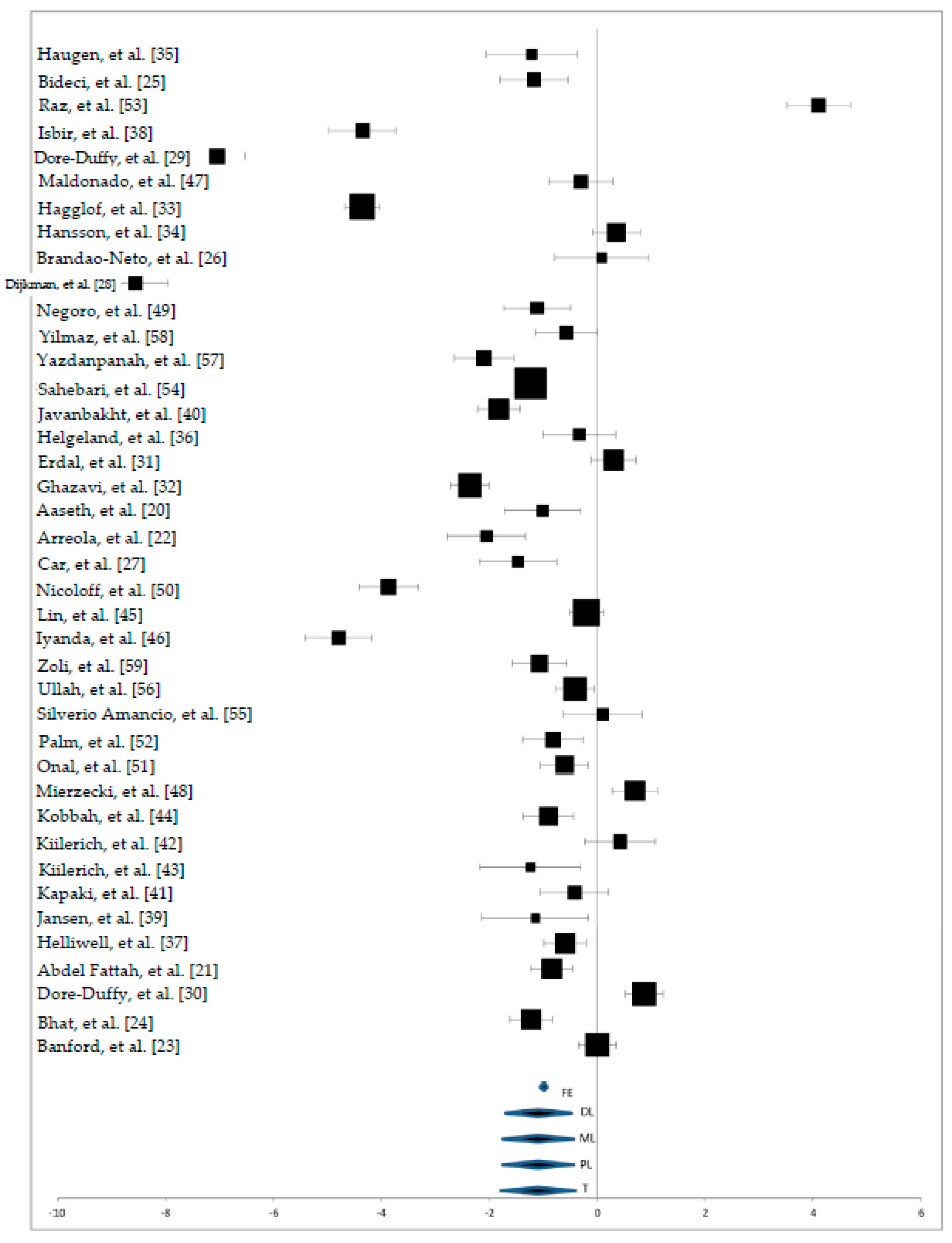 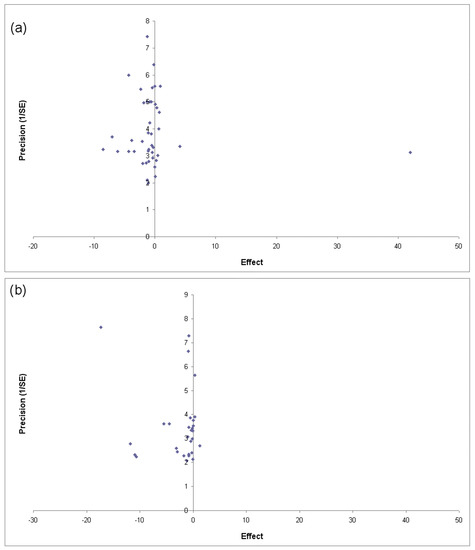