The exploitation of synthetic aperture properties in nadir-looking radars is opening new scenarios in the framework of satellite radar altimetry. Both recent and upcoming missions including Cryosat-2, Sentinel-3, Sentinel-6 and SWOT take benefit from the coherent processing of radar data, aimed at improving range measurements in particular contexts, such as ice, open ocean, coastal zone, and even inland waters. This work investigates the possibilities offered by current and future satellite radar altimetry missions for the study of inland water bodies, probing into the peculiarities of the expected radar returns and their potential usage. In this regard, signals collected by the RA-2 instrument (Radar Altimeter 2) onboard the Envisat mission offer an unprecedented possibility, even with a relatively low pulse repetition frequency, to analyze the peculiarities of actual signals for detecting and ranging small water surfaces. In particular, the RA-2 instrument offers a global archive of Individual Echoes (IEs), collected at the native sampling rate of 1795 Hz, in addition to the 18 Hz data obtained by incoherent averaging, which are typically delivered to the users as standard products. RA-2 shares with future radar platforms such as Sentinel-6 a continuous and interleaved working modality, as was recommended by the scientific community in designing next missions’ requirements. This is a further reason to consider the usage of RA-2 IEs as particularly attractive. Whilst only available for a small percentage of the earth’s surface, sufficient IE data exist to study the height retrieval capability of these echoes, in particular for what concerns small water bodies, where we show that enough coherence is exhibited for focusing relatively narrow surfaces and range them correctly. A peculiar aspect of this work lies in the assumption that most of the returned echoes (in RA-2 IEs) are specular. A theoretical framework is developed according to this assumption, which is validated by investigating real RA-2 data and observing their related specular features. In particular, we discuss how specular echoes are expected to be very common in inland altimetry, and are most often associated with small to medium size lakes and rivers. This paper illustrates the expected electromagnetic behavior of specular water targets by exploiting the classical radar cross-section (RCS) theory for specular surfaces. Results from the model are compared with real IE data in three selected case studies, regarding two rivers of variable width and one flood plain, in order to check different hydrological regimes. The model very closely matches the data in all cases, making the results of this validation activity very promising. In particular, we demonstrate the feasibility of using satellite radar altimetry in rivers much smaller than what was considered possible until now. View Full-Text
Keywords: inland water altimetry; coherence; Doppler processing; Envisat; Individual Echoes inland water altimetry; coherence; Doppler processing; Envisat; Individual Echoes
►▼ Show Figures 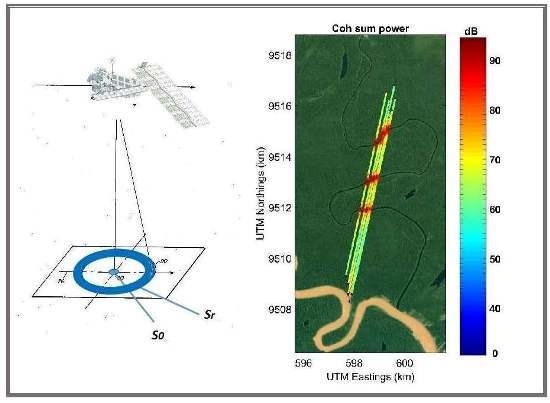