William A. Gould 7 and

Climate change is warming the temperatures and lengthening the Arctic growing season with potentially important effects on plant phenology. The ability of plant species to acclimate to changing climatic conditions will dictate the level to which their spatial coverage and habitat-type dominance is different in the future. While the effect of changes in temperature on phenology and species composition have been observed at the plot and at the regional scale, a systematic assessment at medium spatial scales using new noninvasive sensor techniques has not been performed yet. At four sites across the North Slope of Alaska, changes in the Normalized Difference Vegetation Index (NDVI) signal were observed by Mobile Instrumented Sensor Platforms (MISP) that are suspended over 50 m transects spanning local moisture gradients. The rates of greening (measured in June) and senescence (measured in August) in response to the air temperature was estimated by changes in NDVI measured as the difference between the NDVI on a specific date and three days later. In June, graminoid- and shrub-dominated habitats showed the greatest rates of NDVI increase in response to the high air temperatures, while forb- and lichen-dominated habitats were less responsive. In August, the NDVI was more responsive to variations in the daily average temperature than spring greening at all sites. For graminoid- and shrub-dominated habitats, we observed a delayed decrease of the NDVI, reflecting a prolonged growing season, in response to high August temperatures. Consequently, the annual C assimilation capacity of these habitats is increased, which in turn may be partially responsible for shrub expansion and further increases in net summer CO2 fixation. Strong interannual differences highlight that long-term and noninvasive measurements of such complex feedback mechanisms in arctic ecosystems are critical to fully articulate the net effects of climate variability and climate change on plant community and ecosystem processes. View Full-Text
Keywords: arctic shrubs; Mobile Instrumented Sensor Platform; Normalized Difference Vegetation Index; climate change; phenology arctic shrubs; Mobile Instrumented Sensor Platform; Normalized Difference Vegetation Index; climate change; phenology
►▼ Show Figures 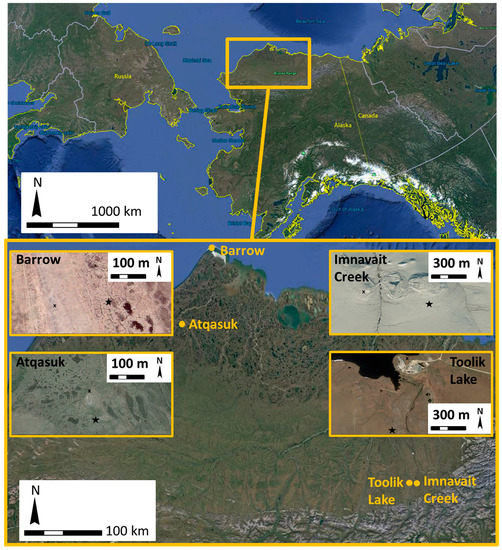