Arctic warming is leading to substantial changes to permafrost including rapid degradation of ice and ice-rich coasts and riverbanks. In this study, we present and evaluate a high spatiotemporal resolution three-year time series of X-Band microwave satellite data from the TerraSAR-X (TSX) satellite to quantify cliff-top erosion (CTE) of an ice-rich permafrost riverbank in the central Lena Delta. We apply a threshold on TSX backscatter images and automatically extract cliff-top lines to derive intra- and inter-annual CTE. In order to examine the drivers of erosion we statistically compare CTE with climatic baseline data using linear mixed models and analysis of variance (ANOVA). Our evaluation of TSX-derived CTE against annual optical-derived CTE and seasonal in situ measurements showed good agreement between all three datasets. We observed continuous erosion from June to September in 2014 and 2015 with no significant seasonality across the thawing season. We found the highest net annual cliff-top erosion of 6.9 m in 2014, in accordance with above-average mean temperatures and thawing degree days as well as low precipitation. We found high net annual erosion and erosion variability in 2015 associated with moderate mean temperatures but above average precipitation. According to linear mixed models, climate parameters alone could not explain intra-seasonal erosional patterns and additional factors such as ground ice content likely drive the observed erosion. Finally, mean backscatter intensity on the cliff surface decreased from −5.29 to −6.69 dB from 2013 to 2015, respectively, likely resulting from changes in surface geometry and properties that could be connected to partial slope stabilization. Overall, we conclude that X-Band backscatter time series can successfully be used to complement optical remote sensing and in situ monitoring of rapid tundra permafrost erosion at riverbanks and coasts by reliably providing information about intra-seasonal dynamics. View Full-Text
Keywords: SAR; backscatter; X-Band; erosion; thermal erosion SAR; backscatter; X-Band; erosion; thermal erosion
►▼ Show Figures 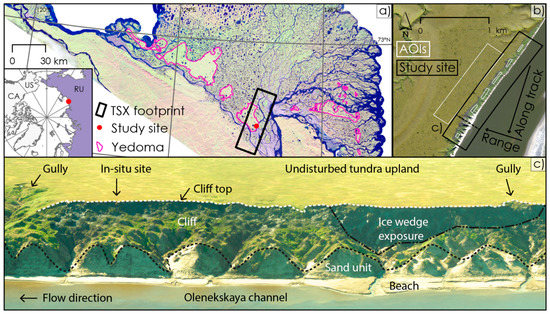