Indian agriculture relies on monsoon rainfall and irrigation from surface and groundwater. The interannual variability of monsoon rainfalls is high, which forces South Indian farmers to adapt their irrigated areas to local water availability. In this study, we have developed and tested a methodology for monitoring these spatiotemporal variations using Sentinel-1 and -2 observations over the Kudaliar catchment, Telangana State (~1000 km2). These free radar and optical data have been acquired since 2015 on a weekly basis over continental areas, at a high spatial resolution (10–20 m) that is well adapted to the small areas of South Indian field crops. A machine learning algorithm, the Random Forest method, was used over three growing seasons (January to March and July to November 2016 and January to March 2017) to classify small patches of inundated rice paddy, maize, and other irrigated crops, as well as surface water stored in the small reservoirs scattered across the landscape. The crop production comprises only irrigated crops (less than 20% of the areas) during the dry season (Rabi, December to March), to which rain-fed cotton is added to reach 60% of the areas during the monsoon season (Kharif, June to November). Sentinel-1 radar backscatter provides useful observations during the cloudy monsoon season. The lowest irrigated area totals were found during Rabi 2016 and Kharif 2016, accounting for 3.5 and 5% with moderate classification confusion. This confusion decreases with increasing areas of irrigated crops during Rabi 2017. During this season, 16% of rice and 6% of irrigated crops were detected after the exceptional rainfalls observed in September. Surface water in small surface reservoirs reached 3% of the total area, which corresponds to a high value. The use of both Sentinel datasets improves the method accuracy and strengthens our confidence in the resulting maps. This methodology shows the potential of automatically monitoring, in near real time, the high short term variability of irrigated area totals in South India, as a proxy for estimating irrigated water and groundwater needs. These are estimated over the study period to range from 49.5 ± 0.78 mm (1.5% uncertainty) in Rabi 2016, and 44.9 ± 2.9 mm (6.5% uncertainty) in the Kharif season, to 226.2 ± 5.8 mm (2.5% uncertainty) in Rabi 2017. This variation must be related to groundwater recharge estimates that range from 10 mm to 160 mm·yr−1 in the Hyderabad region. These dynamic agro-hydrological variables estimated from Sentinel remote sensing data are crucial in calibrating runoff, aquifer recharge, water use and evapotranspiration for the spatially distributed agro-hydrological models employed to quantify the impacts of agriculture on water resources. View Full-Text
Keywords: crop cover mapping; random forest; Sentinel-1; Sentinel-2; radar and optical synergy; agro-hydrology; rice irrigation; groundwater shortage monitoring crop cover mapping; random forest; Sentinel-1; Sentinel-2; radar and optical synergy; agro-hydrology; rice irrigation; groundwater shortage monitoring
►▼ Show Figures 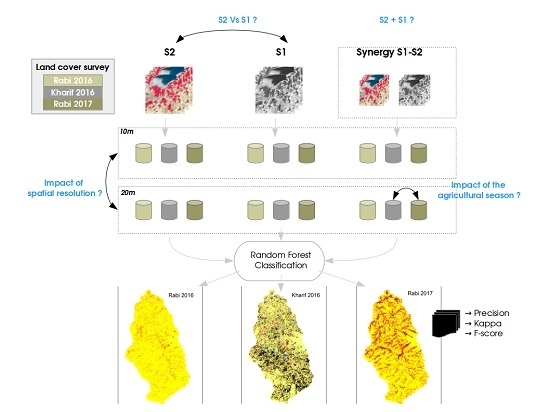