Spatiotemporal Variability of Land Surface Phenology in China from 2001–2014

Land surface phenology is a highly sensitive and simple indicator of vegetation dynamics and climate change. However, few studies on spatiotemporal distribution patterns and trends in land surface phenology across different climate and vegetation types in China have been conducted since 2000, a period during which China has experienced remarkably strong El Niño events. In addition, even fewer studies have focused on changes of the end of season (EOS) and length of season (LOS) despite their importance. In this study, we used four methods to reconstruct Moderate Resolution Imaging Spectroradiometer (MODIS) Enhanced Vegetation Index (EVI) dataset and chose the best smoothing result to estimate land surface phenology. Then, the phenophase trends were analyzed via the Mann-Kendall method. We aimed to assess whether trends in land surface phenology have continued since 2000 in China at both national and regional levels. We also sought to determine whether trends in land surface phenology in subtropical or high altitude areas are the same as those observed in high latitude areas and whether those trends are uniform among different vegetation types. The result indicated that the start of season (SOS) was progressively delayed with increasing latitude and altitude. In contrast, EOS exhibited an opposite trend in its spatial distribution, and LOS showed clear spatial patterns over this region that decreased from south to north and from east to west at a national scale. The trend of SOS was advanced at a national level, while the trend in Southern China and the Tibetan Plateau was opposite to that in Northern China. The transaction zone of the SOS within Northern China and Southern China occurred approximately between 31.4°N and 35.2°N. The trend in EOS and LOS were delayed and extended, respectively, at both national and regional levels except that of LOS in the Tibetan Plateau, which was shortened by delayed SOS onset more than by delayed EOS onset. The absolute magnitude of SOS was decreased after 2000 compared with previous studies, and the phenophase trends are species specific. View Full-Text
Keywords: land surface phenology; spatiotemporal analysis; MODIS; remote sensing; Enhanced Vegetation Index (EVI); temporal trend land surface phenology; spatiotemporal analysis; MODIS; remote sensing; Enhanced Vegetation Index (EVI); temporal trend
►▼ Show Figures 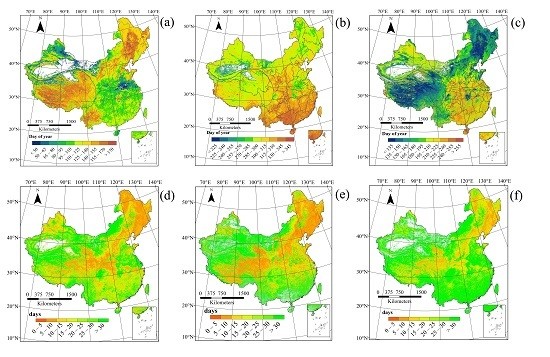