Environmental Concerns of Deforestation in Myanmar 2001–2010

Mapping Daily Air Temperature for Antarctica Based on MODIS LST

Spatial predictions of near-surface air temperature () in Antarctica are required as baseline information for a variety of research disciplines. Since the network of weather stations in Antarctica is sparse, remote sensing methods have large potential due to their capabilities and accessibility. Based on the MODIS land surface temperature (LST) data, at the exact time of satellite overpass was modelled at a spatial resolution of 1 km using data from 32 weather stations. The performance of a simple linear regression model to predict from LST was compared to the performance of three machine learning algorithms: Random Forest (RF), generalized boosted regression models (GBM) and Cubist. In addition to LST, auxiliary predictor variables were tested in these models. Their relevance was evaluated by a Cubist-based forward feature selection in conjunction with leave-one-station-out cross-validation to reduce the impact of spatial overfitting. GBM performed best to predict using LST and the month of the year as predictor variables. Using the trained model, could be estimated with a leave-one-station-out cross-validated of 0.71 and a RMSE of 10.51 C. However, the machine learning approaches only slightly outperformed the simple linear estimation of from LST ( of 0.64, RMSE of 11.02 C). Using the trained model allowed creating time series of over Antarctica for 2013. Extending the training data by including more years will allow developing time series of from 2000 on. View Full-Text
Keywords: air temperature; Antarctica; feature selection; machine learning; MODIS LST air temperature; Antarctica; feature selection; machine learning; MODIS LST
►▼ Show Figures 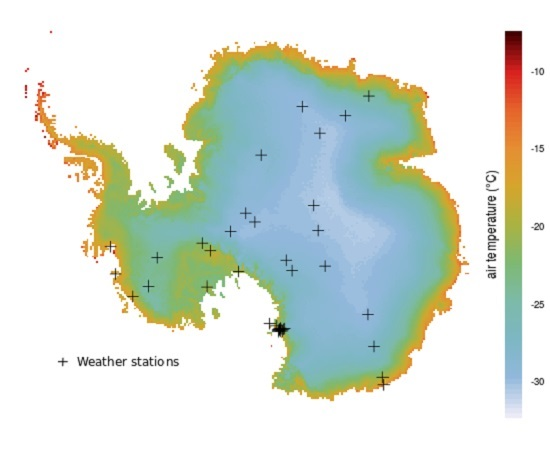