Evaluating the Effectiveness of Conservation on Mangroves: A Remote Sensing-Based Comparison for Two Adjacent Protected Areas in Shenzhen and Hong Kong, China
Previous Article in Journal

The Biosphere Reserve of La Mancha Húmeda is a wetland-rich area located in central Spain. This reserve comprises a set of temporary lakes, often saline, where water level fluctuates seasonally. Water inflows come mainly from direct precipitation and runoff of small lake watersheds. Most of these lakes lack surface outlets and behave as endorheic systems, where water withdrawal is mainly due to evaporation, causing salt accumulation in the lake beds. Remote sensing was used to estimate the temporal variation of the flooded area in these lakes and their associated hydrological patterns related to the seasonality of precipitation and evapotranspiration. Landsat 7 ETM+ satellite images for the reference period 2013–2015 were jointly used with ground-truth datasets. Several inverse modeling methods, such as two-band and multispectral indices, single-band threshold, classification methods, artificial neural network, support vector machine and genetic programming, were applied to retrieve information on the variation of the flooded areas. Results were compared to ground-truth data, and the classification errors were evaluated by means of the kappa coefficient. Comparative analyses demonstrated that the genetic programming approach yielded the best results, with a kappa value of 0.98 and a total error of omission-commission of 2%. The dependence of the variations in the water-covered area on precipitation and evaporation was also investigated. The results show the potential of the tested techniques to monitor the hydrological patterns of temporary lakes in semiarid areas, which might be useful for management strategy-linked lake conservation and specifically to accomplish the goals of both the European Water Framework Directive and the Habitats Directive. View Full-Text
Keywords: temporary lakes; remote sensing; Landsat 7; genetic programming; multispectral indices; hydrological patterns; water cover detection temporary lakes; remote sensing; Landsat 7; genetic programming; multispectral indices; hydrological patterns; water cover detection
►▼ Show Figures 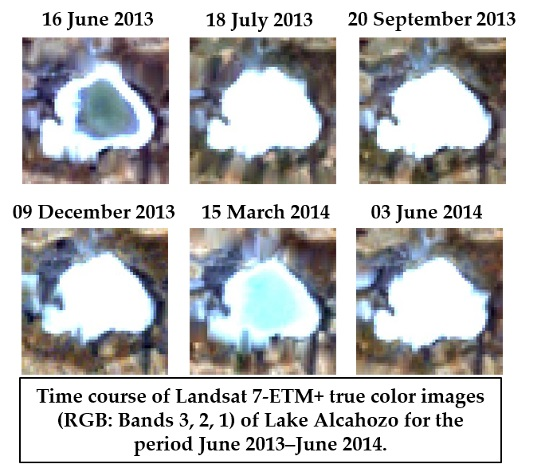