Satellite altimetry is the only method to monitor global changes in sea-ice thickness and volume over decades. Such missions (e.g., ERS, Envisat, ICESat, CryoSat-2) are based on the conversion of freeboard into thickness by assuming hydrostatic equilibrium. Freeboard, the height of the ice above the water level, is therefore a crucial parameter. Freeboard is a relative quantity, computed by subtracting the instantaneous sea surface height from the sea-ice surface elevations. Hence, the impact of geophysical range corrections depends on the performance of the interpolation between subsequent leads to retrieve the sea surface height, and the magnitude of the correction. In this study, we investigate this impact by considering CryoSat-2 sea-ice freeboard retrievals in autumn and spring. Our findings show that major parts of the Arctic are not noticeably affected by the corrections. However, we find areas with very low lead density like the multiyear ice north of Canada, and landfast ice zones, where the impact can be substantial. In March 2015, 7.17% and 2.69% of all valid CryoSat-2 freeboard grid cells are affected by the ocean tides and the inverse barometric correction by more than 1 cm. They represent by far the major contributions among the impacts of the individual corrections. View Full-Text
Keywords: Arctic sea ice; sea-ice thickness; remote sensing; radar altimetry; CryoSat-2 Arctic sea ice; sea-ice thickness; remote sensing; radar altimetry; CryoSat-2
►▼ Show Figures 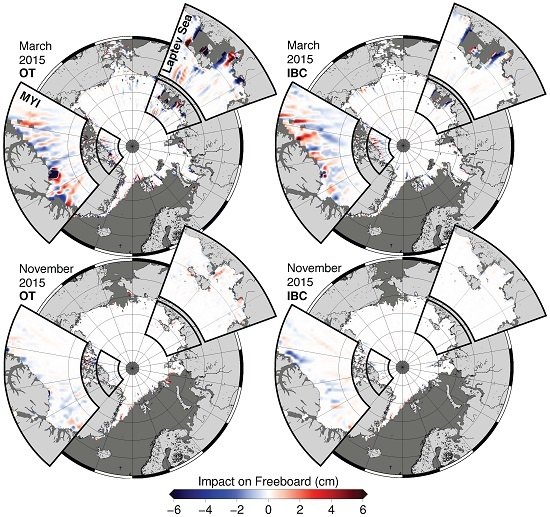