Areas affected by land degradation in Sub-Saharan West Africa between 1982 and 2012 are identified using time-series analysis of vegetation index data derived from satellites. The residual trend (RESTREND) of a Normalized Difference Vegetation Index (NDVI) time-series is defined as the fraction of the difference between the observed NDVI and the NDVI predicted from climate data. It has been widely used to study desertification and other forms of land degradation in drylands. The method works on the assumption that a negative trend of vegetation photosynthetic capacity is an indication of land degradation if it is independent from climate variability. In the past, many scientists depended on rainfall data as the major climatic factor controlling vegetation productivity in drylands when applying the RESTREND method. However, the water that is directly available to vegetation is stored as soil moisture, which is a function of cumulative rainfall, surface runoff, infiltration and evapotranspiration. In this study, the new NDVI third generation (NDVI3g), which was generated by the National Aeronautics and Space Administration-Goddard Space Flight Center Global Inventory Modeling and Mapping Studies (NASA-GSFC GIMMS) group, was used as a satellite-derived proxy of vegetation productivity, together with the soil moisture index product from the Climate Prediction Center (CPC) and rainfall data from the Climate Research Unit (CRU). The results show that the soil moisture/NDVI pixel-wise residual trend indicates land degraded areas more clearly than rainfall/NDVI. The spatial and temporal trends of the RESTREND in the region follow the patterns of drought episodes, reaffirming the difficulties in separating the impacts of drought and land degradation on vegetation photosynthetic capacity. Therefore, future studies of land degradation and desertification in drylands should go beyond using rainfall as a sole predictor of vegetation condition, and include soil moisture index datasets in the analysis. View Full-Text
Keywords: land degradation; RESTREND; NDVI3g; soil moisture; rainfall; Sub-Saharan West Africa land degradation; RESTREND; NDVI3g; soil moisture; rainfall; Sub-Saharan West Africa
►▼ Show Figures 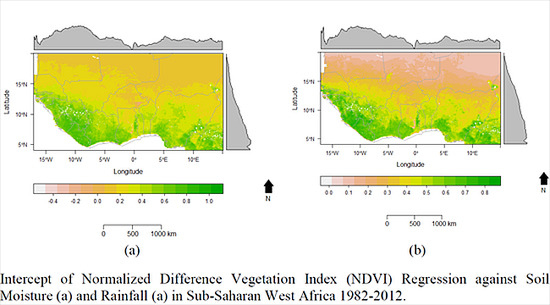