Definitions and Mapping of East African Wetlands: A Review

Shortly after the launch of ALOS PALSAR L-band SAR by the Japan Space Exploration Agency (JAXA), a program to develop an Earth Science Data Record (ESDR) for inundated wetlands was funded by NASA. Using established methodologies, extensive multi-temporal L-band ALOS ScanSAR data acquired bi-monthly by the PALSAR instrument onboard ALOS were used to classify the inundation state for South America for delivery as a component of this Inundated Wetlands ESDR (IW-ESDR) and in collaboration with JAXA’s ALOS Kyoto and Carbon Initiative science programme. We describe these methodologies and the final classification of the inundation state, then compared this with results derived from dual-season data acquired by the JERS-1 L-band SAR mission in 1995 and 1996, as well as with estimates of surface water extent measured globally every 10 days by coarser resolution sensors. Good correspondence was found when comparing open water extent classified from multi-temporal ALOS ScanSAR data with surface water fraction identified from coarse resolution sensors, except in those regions where there may be differences in sensitivity to widespread and shallow seasonal flooding event, or in areas that could be excluded through use of a continental-scale inundatable mask. It was found that the ALOS ScanSAR classification of inundated vegetation was relatively insensitive to inundated herbaceous vegetation. Inundation dynamics were examined using the multi-temporal ALOS ScanSAR acquisitions over the Pacaya-Samiria and surrounding areas in the Peruvian Amazon. View Full-Text
Keywords: SAR; wetlands; ALOS; inundation; double-bounce SAR; wetlands; ALOS; inundation; double-bounce
►▼ Show Figures 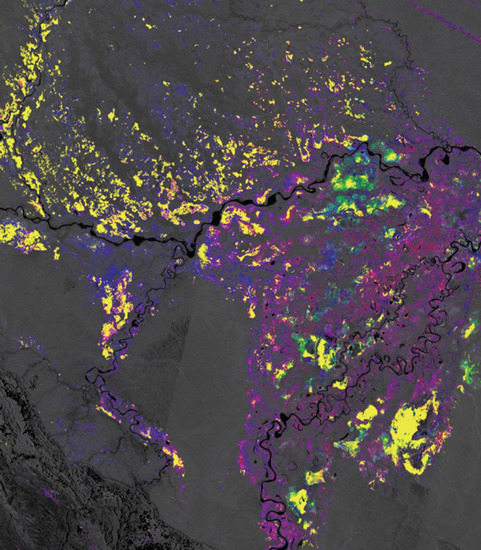