High-resolution data are increasingly used for various applications, yet the revisit time is still low for some applications, particularly in frequently cloud-covered areas. Therefore, sensors are often combined, which raises issues on data consistency. In this study, we start from L1 to L3 data, and investigate the impact of harmonization measures, correcting for difference in radiometric gain and spectral response function (SRF), and the use of a common processing chain with the same atmospheric correction for Sentinel-2A/B, Landsat-8, DEIMOS-1, and Proba-V center cameras. These harmonization measures are evaluated step-wise in two applications: (1) agricultural monitoring, and (2) hydrological modelling in an urban context, using biophysical parameters and NDVI. The evaluation includes validation with in situ data, relative consistency analysis between different sensors, and the evaluation of the time series noise. A higher accuracy was not obtained when validating against in situ data. Yet, the relative analysis and the time series noise analysis clearly demonstrated that the largest improvement in consistency between sensors was obtained when applying the same atmospheric correction to all sensors. The gain correction obtained and its impact on the results was small, indicating that the sensors were already well calibrated. We could not demonstrate an improved consistency after SRF correction. It is likely that other factors, such as anisotropy effects, play a larger role, requiring further research. View Full-Text
Keywords: consistent time series; radiometric calibration; SRF; landsat-8; sentinel-2; PROBA-V; DEIMOS-1 consistent time series; radiometric calibration; SRF; landsat-8; sentinel-2; PROBA-V; DEIMOS-1
►▼ Show Figures 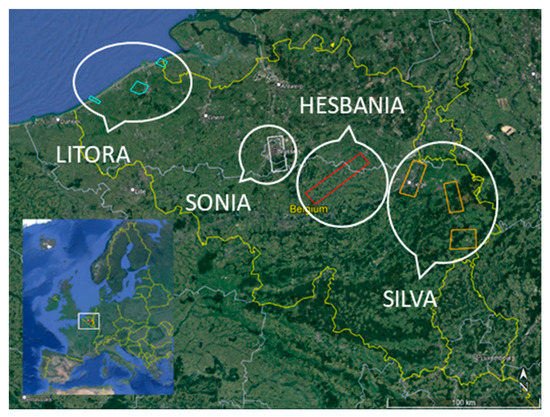