Vehicle Re-Identification Based on UAV Viewpoint: Dataset and Method
Next Article in Special Issue

MANet: A Network Architecture for Remote Sensing Spatiotemporal Fusion Based on Multiscale and Attention Mechanisms
Previous Article in Special Issue

:
The radio determination service system (RDSS), a navigation and positioning system independently developed by China, features services such as short-message communication, position reporting, and international search and rescue. The L-band pseudo-range and phase data are the primary data sources in precise orbit determination (POD) for geostationary Earth orbit (GEO) satellite in the BeiDou system, especially in the orbit manoeuvre period. These data are the only data sources in the POD for GEOs. However, when the pseudo-range and phase data is abnormal due to unforeseen reasons, such as satellite hardware failure or monitoring receiver abnormalities, the data abnormality leads to orbit determination abnormalities or even failures for GEOs, then the service performance and availability of the RDSS system are greatly degraded. Therefore, a new POD method for GEOs based on BeiDou short-message communication ranging data has gained research attention to improve the service reliability of the BeiDou navigation satellite system (BDS)-3, realising the deep integration of communication and navigation services of the BDS. This problem has not been addressed so far. Therefore, in this study, a new POD method for GEO satellites is investigated using high-precision satellite laser ranging (SLR) data and RDSS data. The SLR data are used as the benchmark to calibrate the time delay value of RDSS equipment, and RDSS data are only used in the orbit determination process by fixing the corrected RDSS time delay value, and the satellite orbit parameters and dynamic parameters are solved. Experimental analysis is conducted using the measured SLR and RDSS data of the BDS, and the orbit accuracy in this paper is evaluated by the precise ephemeris of the Multi-GNSS pilot project (MGEX) and SLR data. The results show that the orbit accuracy in the orbital arc and the 2-h orbital prediction arc for GEOs are 6.01 m and 6.99 m, respectively, compared with the ephemeris of MGEX, and the short-arc orbit accuracy after 4 h of manoeuvring is 11.11 m. The orbit accuracy in the radial component by SLR data is 0.54 m. The required orbit accuracy for GEO satellites in the RDSS service of the BDS-3 is 15 m. The orbit accuracy achieved in this paper is superior to that of this technical index. This method expands the application field of the RDSS data and greatly enriches the POD method for GEOs. It can be adopted as a backup technology for the POD method for GEOs based on RNSS data, significantly improving the service reliability of the BeiDou RDSS service.
Keywords:
BeiDou system (BDS); geostationary earth orbit (GEO) satellite; radio determination satellite service (RDSS); satellite laser ranging (SLR); multi-GNSS pilot project (MGEX)

3. Orbit Determination Method for GEO Satellite Based on RDSS Data

3.2. Principles of Calibrating Time Delay for RDSS Equipments Based on SLR Data

For calibrating RDSS equipment time delay based on SLR data, first the SLR data and RDSS data are preprocessed, then a reasonable dynamical model is selected, and, finally, SLR and RDSS data are jointly used for orbit determination. The estimated parameters are the satellite orbit, dynamic parameters, and the RDSS equipment time delay. All GEO satellites are processed together. The normal equations of the SLR data and the RDSS data are formed, respectively. The former only contains the partial derivatives of the satellite orbital parameters and dynamic parameters, while the latter contains the partial derivatives of the satellite orbital parameters, the dynamic parameters, and the partial derivatives of the RDSS time delay parameters. The final normal equations are formed by superpositioning both normal equations, and the joint orbit determination is completed through the least square method. The process flow chart of calibrating RDSS equipment time delay based on SLR data is shown in Figure 2.
For SLR observation and RDSS four-way ranging observation , with the error term removed, the observation equations are as follows: where is the coordinates of the SLR station m, and are the coordinates of RDSS MCC station k and user l, respectively, which are known quantities; and are the orbital positions of satellites i and j, respectively; is sum of the time delays of the out-station beam and the in-station beam.
The error equation can be concluded by linearising formula (4). where and are the initial orbital positions, velocities, and dynamic model parameters of satellites i and j, respectively. Based on Equation (3), the RDSS equipment time delay is estimated using the least-squares batch method.
Because SLR observation is subject to weather conditions, it is impossible to achieve all-weather observations. Therefore, the POD method by SLR and RDSS data cannot be a routine method for GEOs. While RDSS data can be obtained in real time, this paper adopts the SLR data to calibrate the time delay of the RDSS. RDSS data are used only for GEO satellite orbit determination, for which only the parts corresponding to RDSS data in formulas (1) and (2) are used.

The RDSS data are obtained from seven RDSS calibration stations deployed in Beijing, Sichuan, Hainan, Southeast China, and Northeast China, and two in Xinjiang. The SLR station was deployed in Beijing. The arc length for orbit determination is three days, and the data sampling rate is 60 s. The estimated parameters include the GEO initial orbit parameters of GEO satellites, solar radiation pressure parameters, and RDSS equipment time delay parameters. The RDSS equipment time delay is the sum of outstation and in-station link equipment time delays . The normal equations of SLR data and the RDSS four-way ranging data are formed. Based on these, the pseudorange/pseudophase data and the RDSS four-way ranging data can be processed independently, thus flexibly processing different types of data.
As for the SLR data preprocessing, first, the phase centres of the antennas of tracking stations are corrected; second, the phase centres of the antennas that transmit satellite navigation signals are attributed to the centre of mass of the satellite; third, the Marini model is used to deduct the tropospheric error; and finally, the errors of general relativity and the tidal effect are corrected. In the RDSS data preprocessing, the phase centres of the satellite and station antenna are corrected; then, the Black model is used to correct the errors of tropospheric delay and the 14-parameter Klobuchar model is used to correct the ionospheric delay; finally, the error terms of the Earth rotation effect and general relativity are corrected.
The orbits for BDS-2 5 GEO satellites, BDS-3 3 GEO satellites are determined. Table 1 shows the strategies for the combined POD methods by RDSS and SLR data.

The RDSS data are from 1 to 3 July 2019 and from 1 June to 31 July 2021. The SLR data are on 2 July 2019 and from 1 June to 31 July 2021 in Beijing. These data are jointly used for the time delay calibration of the RDSS equipment, and the RDSS data from 1 to 10 July 2019 and from 29 May to 31 July are used for sliding orbit determination with a 3-day arc length and orbit determination. We evaluate the accuracy of the estimated RDSS time delay value, the orbit accuracy of GEO satellites based on the observation residuals, overlap orbit differences, and orbit accuracy in radial direction based on the SLR data.

The POD experiments by RDSS data are only made by fixing the RDSS time delay value based on SLR data calibration. Only the satellite orbit and dynamic parameters are solved. The residual sequence of the RDSS data from 1 to 3 July is shown in Figure 4. The root mean square (RMS) value of the RDSS residuals for the GEO satellite is 1.74 m. The residual magnitude is decided by the observation accuracy of the data type. Because the observation accuracy of RDSS data is 1 to 2 m, the residual magnitude is normal.

The International GNSS Service (IGS) and the Multi-GNSS Experiment (MGEX) work together to provide the highest-quality GNSS data and products for free. Among the dozens of analysis centers, the BDS system precision products provided by Wuhan University (WHU, Wuhan, China) are the most complete. The SLR data internationally jointly measured were used to evaluate the orbit accuracy in radial direction, which was 40 cm for the BDS GEO satellites [29]. It is used as the reference orbit for evaluating the orbit accuracy in this paper. The differences between the orbits obtained from RDSS data-based orbit determination and the reference orbit at the same time and the same arc segment show the orbit accuracy by the new POD method based on RDSS data only, including in the orbital arc and the 24 h orbital prediction arc. The signal-in-space range error (SISRE) in orbit is determined by the orbit error in the R (radial), T (normal), and N (tangential) directions, which is as follows:

The OOD Comparisons in the Orbital Arc

4.4. Orbit Accuracy Analysis in Radial Direction Based on the SLR Data 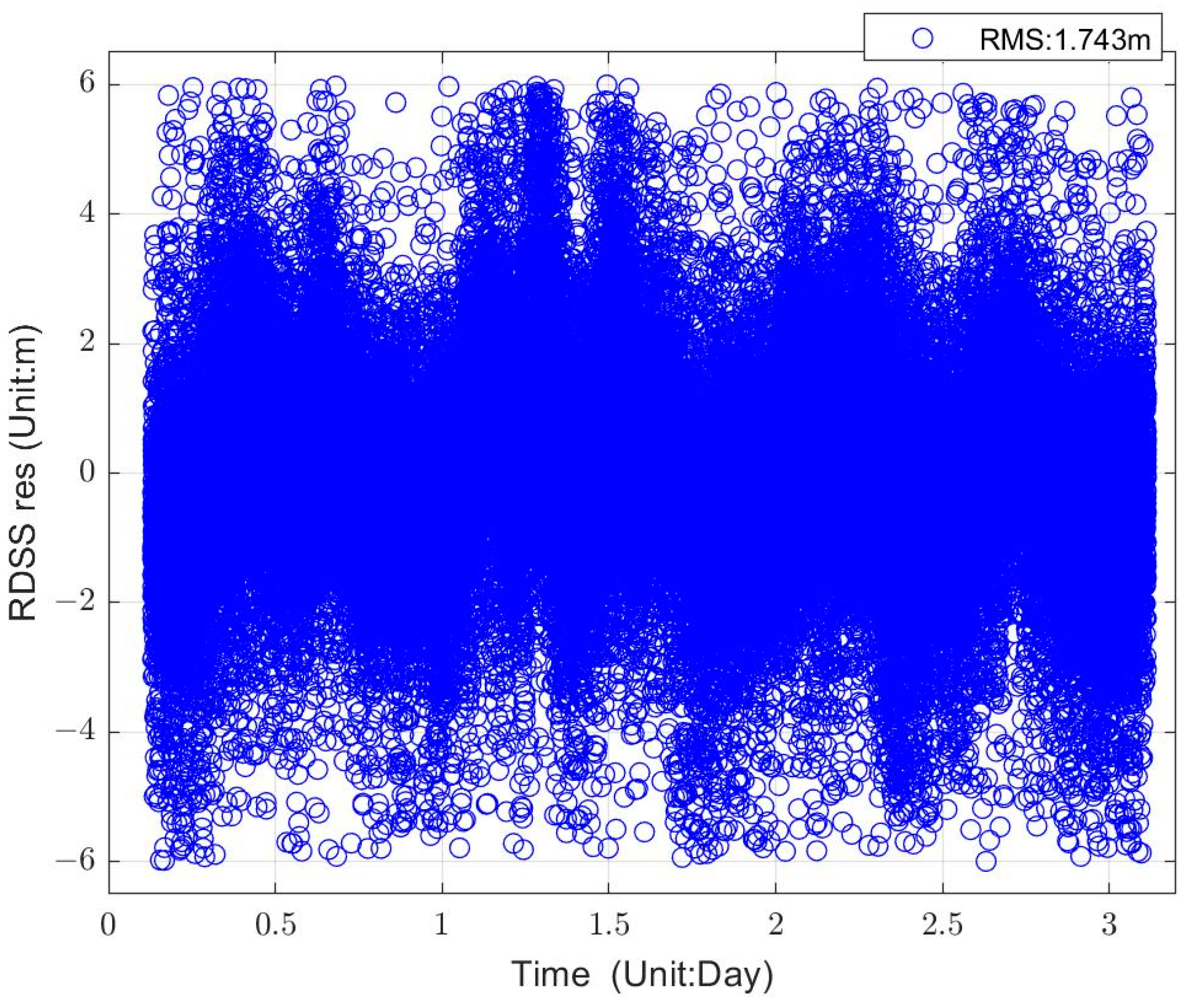 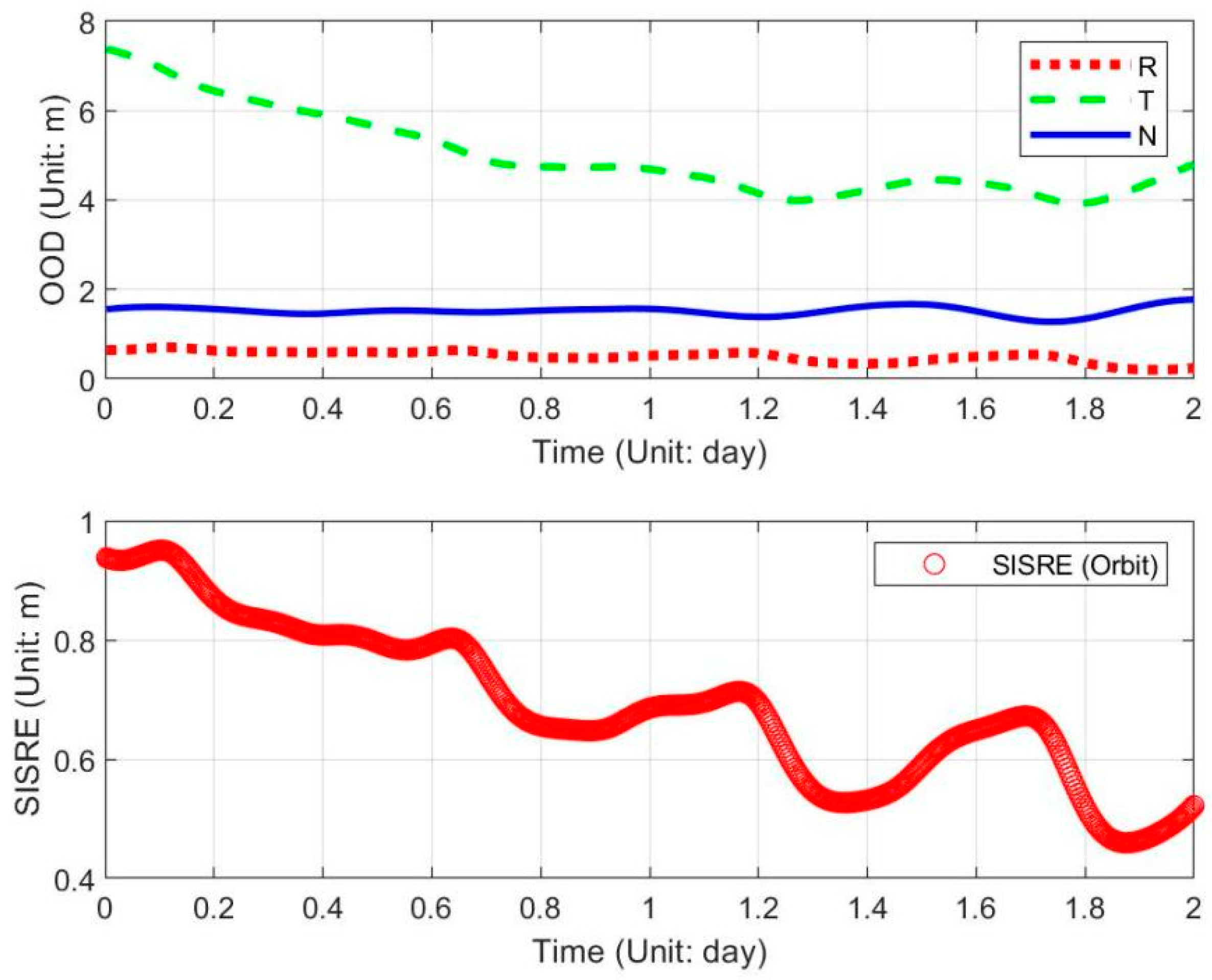 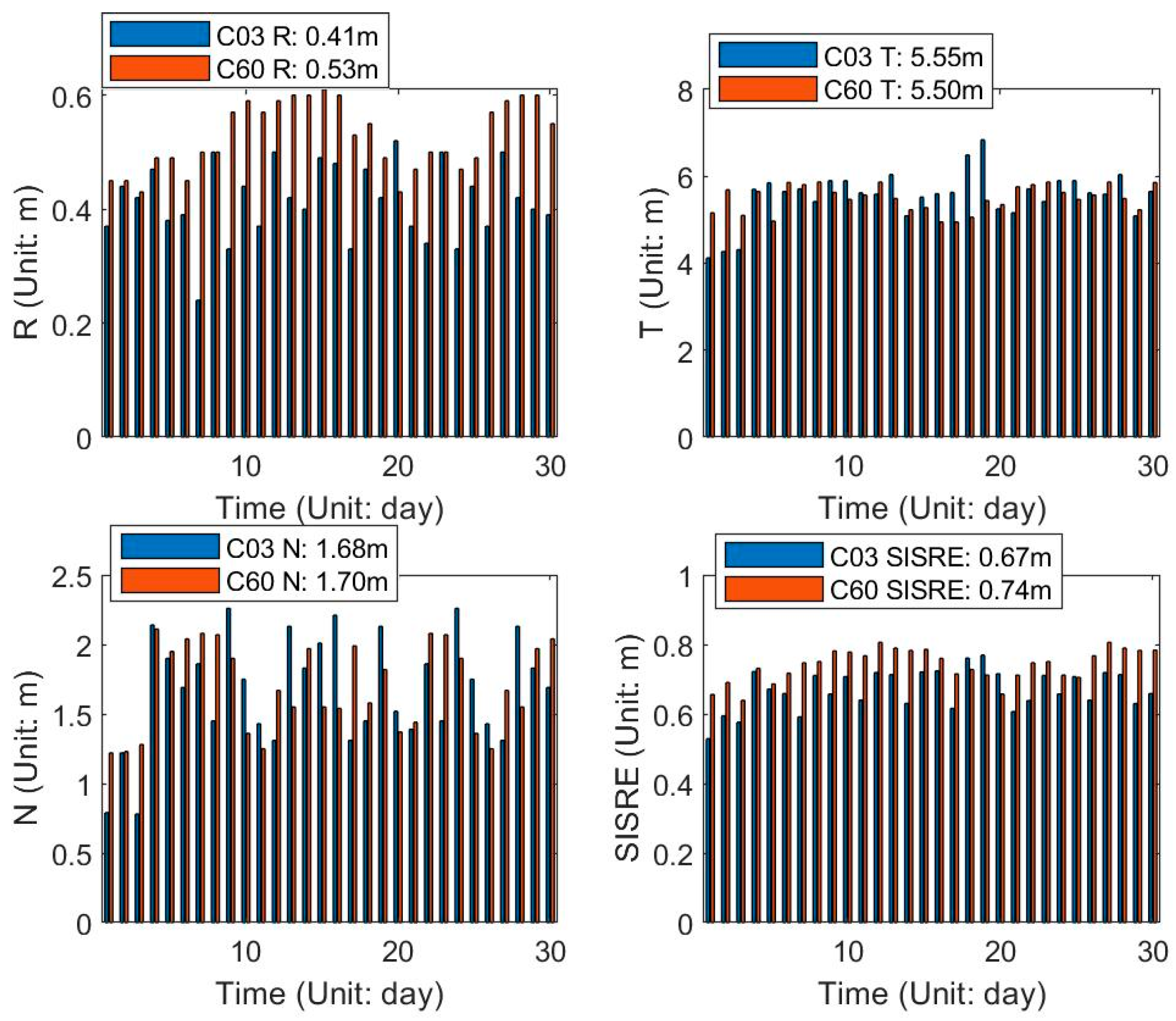 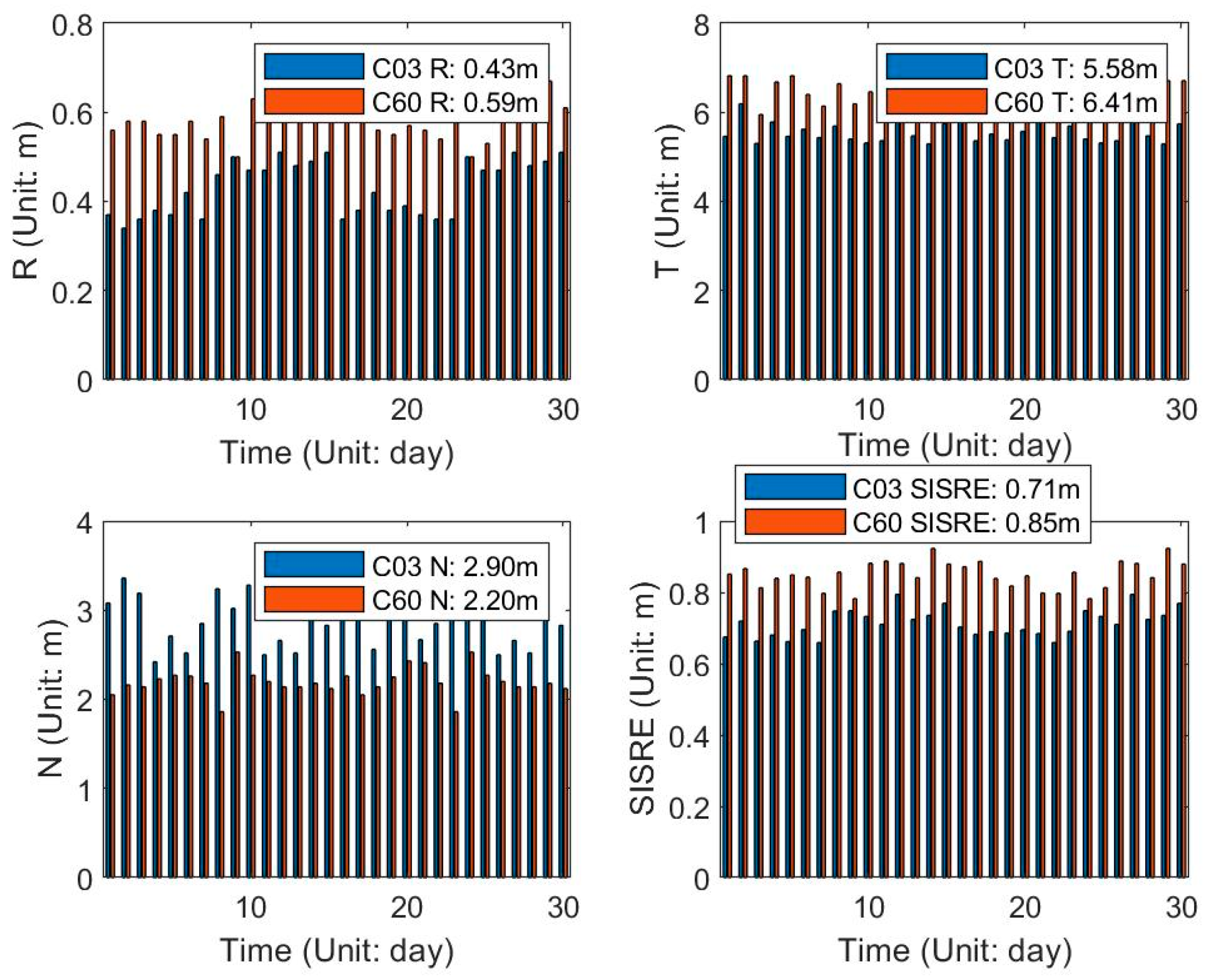