Vertical deformations of the Earth’s surface result from a host of geophysical and geological processes. Identification and assessment of the induced signals is key to addressing outstanding scientific questions, such as those related to the role played by the changing climate on height variations. This study, focused on the European and Mediterranean area, analyzed the GPS height time series of 114 well-distributed stations with the aim of identifying spatially coherent signals likely related to variations of environmental parameters, such as atmospheric surface pressure (SP) and terrestrial water storage (TWS). Linear trends and seasonality were removed from all the time series before applying the principal component analysis (PCA) to identify the main patterns of the space/time interannual variability. Coherent height variations on timescales of about 5 and 10 years were identified by the first and second mode, respectively. They were explained by invoking loading of the crust. Single-value decomposition (SVD) was used to study the coupled interannual space/time variability between the variable pairs GPS height–SP and GPS height–TWS. A decadal timescale was identified that related height and TWS variations. Features common to the height series and to those of a few climate indices—namely, the Arctic Oscillation (AO), the North Atlantic Oscillation (NAO), the East Atlantic (EA), and the multivariate El Niño Southern Oscillation (ENSO) index (MEI)—were also investigated. We found significant correlations only with the MEI. The first height PCA mode of variability, showing a nearly 5-year fluctuation, was anticorrelated (−0.23) with MEI. The second mode, characterized by a decadal fluctuation, was well correlated (+0.58) with MEI; the spatial distribution of the correlation revealed, for Europe and the Mediterranean area, height decrease till 2015, followed by increase, while Scandinavian and Baltic countries showed the opposite behavior. View Full-Text
Keywords: GPS height variability; environmental parameters; principal component analysis (PCA); singular value decomposition (SVD) GPS height variability; environmental parameters; principal component analysis (PCA); singular value decomposition (SVD)
►▼ Show Figures 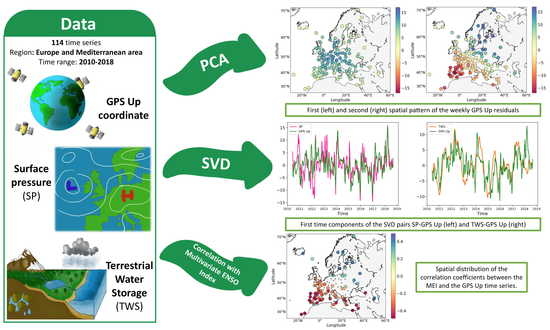