Leaf angle distribution (LAD) is an important attribute of forest canopy architecture and affects the solar radiation regime within the canopy. Terrestrial laser scanning (TLS) has been increasingly used in LAD estimation. The point clouds data suffer from the occlusion effect, which leads to incomplete scanning and depends on measurement strategies such as the number of scans and scanner location. Evaluating these factors is important to understand how to improve LAD, which is still lacking. Here, we introduce an easy way of estimating the LAD using open source software. Importantly, the influence of the occlusion effect on the LAD was evaluated by combining the proposed complete point clouds (CPCs) with the simulated data of 3D tree models of Aspen, Pin Oak and White Oak. We analyzed the effects of the point density, the number of scans and the scanner height on the LAD and G-function. Results show that: (1) the CPC can be used to evaluate the TLS-based normal vector reconstruction accuracy without an occlusion effect; (2) the accuracy is slightly affected by the normal vector reconstruction method and is greatly affected by the point density and the occlusion effect. The higher the point density (with a number of points per unit leaf area of 0.2 cm−2 to 27 cm−2 tested), the better the result is; (3) the performance is more sensitive to the scanner location than the number of scans. Increasing the scanner height improves LAD estimation, which has not been seriously considered in previous studies. It is worth noting that relatively tall trees suffer from a more severe occlusion effect, which deserves further attention in further study. View Full-Text
Keywords: occlusion effect; leaf angle distribution; terrestrial laser scanning; computer simulation occlusion effect; leaf angle distribution; terrestrial laser scanning; computer simulation
►▼ Show Figures 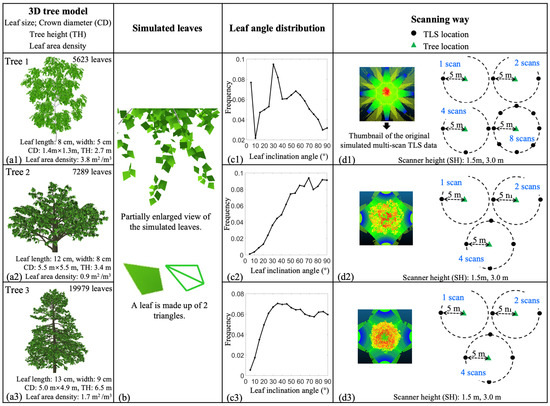