Validation of GOSAT and OCO-2 against In Situ Aircraft Measurements and Comparison with CarbonTracker and GEOS-Chem over Qinhuangdao, China

Aerosol Trends during the Dusty Season over Iran

This study assessed the aerosol climatology over Iran, based on the monthly data of aerosol optical depth (AOD) derived from the reanalysis-based Modern Era Retrospective Analysis for Research and Applications (MERRA-2) and the satellite-based Moderate Resolution Imaging Spectroradiometer (MODIS). In addition, sea level pressure, wind speed, temperature, relative humidity, precipitation, and soil moisture from the ERA5 reanalysis dataset were applied to investigate the climate-related effects on temporal AOD changes. Our analysis identified positive and negative AOD trends during 2000–2010 and 2010–2018, respectively, which are likely linked to aeolian dust changes. The dust-driven AOD trends were supported by changes in the Ångström exponent (AE) and fine mode fraction (FMF) of aerosols over Iran. During the early period (2000–2010), results of AOD-meteorology correlation analyses suggest reduced soil moisture, leading to increased dust emissions, whereas our results suggest that during the later period (2010–2018) an increase of soil moisture led to decreased AOD levels. Soil moisture appears to be a key factor in dust mobilization in the region, notably in southwestern Iran, being influenced by adjacent mineral dust sources. These phenomena were affected by large-scale sea level pressure transformations and the associated meteorology in the preceding winter seasons. Using a multiple linear regression model, AOD variability was linked to various meteorological factors in different regions. Our results suggest that climatic variations strongly affect the dust cycle, with a strong dependence on wintertime conditions in the region. View Full-Text
Keywords: AOD trends; MERRA-2; MODIS; dust changes; meteorology; Iran AOD trends; MERRA-2; MODIS; dust changes; meteorology; Iran
►▼ Show Figures 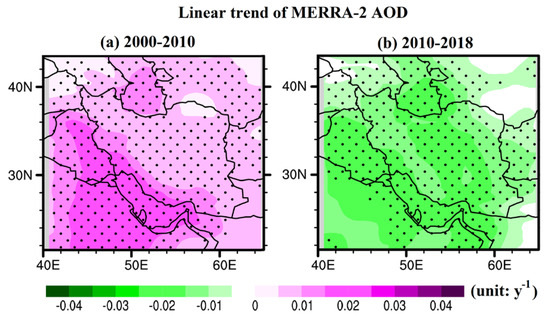