Aerosol—Cloud Interaction with Summer Precipitation over Major Cities in Eritrea

This paper presents the spatiotemporal variability of aerosols, clouds, and precipitation within the major cities in Eritrea and it investigates the relationship between aerosols, clouds, and precipitation concerning the presence of aerosols over the study region. In Eritrea, inadequate water supplies will have both direct and indirect adverse impacts on sustainable development in areas such as health, agriculture, energy, communication, and transport. Besides, there exists a gap in the knowledge on suitable and potential areas for cloud seeding. Further, the inadequate understanding of aerosol-cloud-precipitation (ACP) interactions limits the success of weather modification aimed at improving freshwater sources, storage, and recycling. Spatiotemporal variability of aerosols, clouds, and precipitation involve spatial and time series analysis based on trend and anomaly analysis. To find the relationship between aerosols and clouds, a correlation coefficient is used. The spatiotemporal analysis showed larger variations of aerosols within the last two decades, especially in Assab, indicating that aerosol optical depth (AOD) has increased over the surrounding Red Sea region. Rainfall was significantly low but AOD was significantly high during the 2011 monsoon season. Precipitation was high during 2007 over most parts of Eritrea. The correlation coefficient between AOD and rainfall was negative over Asmara and Nakfa. Cloud effective radius (CER) and cloud optical thickness (COT) exhibited a negative correlation with AOD over Nakfa within the June–July–August (JJA) season. The hybrid single-particle Lagrangian integrated trajectory (HYSPLIT) model that is used to find the path and origin of the air mass of the study region showed that the majority of aerosols made their way to the study region via the westerly and the southwesterly winds. View Full-Text
Keywords: aerosol-cloud-precipitation; aerosol optical depth; cloud effective radius; cloud optical thickness; HYSPLIT aerosol-cloud-precipitation; aerosol optical depth; cloud effective radius; cloud optical thickness; HYSPLIT
►▼ Show Figures 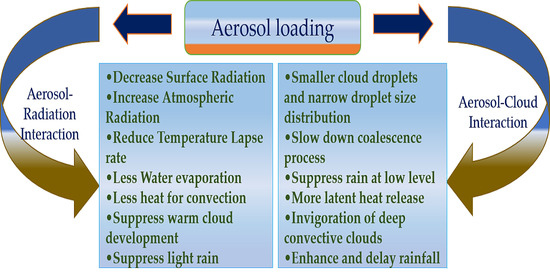