Identification of Aerosol Pollution Hotspots in Jiangsu Province of China

Aerosol optical depth (AOD) is an important atmospheric parameter for climate change assessment, human health, and for total ecological situation studies both regionally and globally. This study used 21-year (2000–2020) high-resolution (1 km) Multiangle Implementation of Atmospheric Correction (MAIAC) algorithm-based AOD from the Moderate Resolution Imaging Spectroradiometer (MODIS) sensor onboard the Terra and Aqua satellites. MAIAC AOD was evaluated against Aerosol Robotic Network (AERONET) data across three sites (Xuzhou-CUMT, NUIST, and Taihu) located in Jiangsu Province. The study also investigated the spatiotemporal distributions and variations in AOD, with associated trends, and measured the impact of meteorology on AOD in the 13 cities of Jiangsu Province. The evaluation results demonstrated a high correlation (r = 0.867~0.929) between MAIAC AOD and AERONET data, with lower root mean squared error (RMSE = 0.130~0.287) and mean absolute error (MAE = 0.091~0.198). In addition, the spatial distribution of AOD was higher (>0.60) in most cities except the southeast of Nantong City (AOD < 0.4). Seasonally, higher AOD was seen in summer (>0.70) than in spring, autumn, and winter, whereas monthly AOD peaked in June (>0.9) and had a minimum in December (<0.4) for all the cities. Frequencies of 0.3 ≤ AOD < 0.4 and 0.4 ≤ AOD < 0.5 were relatively common, indicating a turbid atmosphere, which may be associated with anthropogenic activities, increased emissions, and changes in meteorological circumstances. Trend analysis showed significant increases in AOD during 2000–2009 for all the cities, perhaps reflecting a booming economy and industrial development, with significant emissions of sulfur dioxide (SO2), and primary aerosols. China’s strict air pollution control policies and control of vehicular emissions helped to decrease AOD from 2010 to 2019, enhancing air quality throughout the study area. A notably similar pattern was observed for AOD and meteorological parameters (LST: land surface temperature, WV: water vapor, and P: precipitation), signifying that meteorology plays a role in terms of increasing and decreasing AOD. View Full-Text
Keywords: aerosol; AERONET; MODIS; MAIAC; AOD; trend aerosol; AERONET; MODIS; MAIAC; AOD; trend
►▼ Show Figures 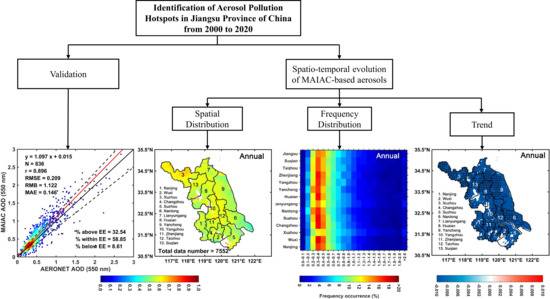 Yu Wang
Ms. Wang Yu is a master's student at the School of Marine Sciences, Nanjing University of Information and Technology, Nanjing, China. She is working on Aerosol Pollution and trace gases. She is now working to identify the hotspots of aerosol pollution and trace gases at a local scale based on high-resolution MODIS and OMI data from 2000 to 20120. She has already published a total of three SCI/SCIE papers as a coauthor.

Muhammad Bilal
Muhammad Bilal earned his Ph.D. degree in 2014 from Hong Kong Polytechnic University (PolyU), Hong Kong. He had the honor to be the first Pakistani (out of 300 applicants from Pakistan) who was selected for the prestigious Hong Kong Ph.D. Fellowship in the pioneer batch of 2010. From 2014 to 2017, he worked as a Postdoctoral Fellow at PolyU, Hong Kong. In October 2017, he joined Nanjing University of Information Science and Technology as a Professor. In October 2018, the Jiangsu Provincial Education Department conferred the special title of “Distinguished Professor” on him based on his outstanding research achievements. He has developed three robust methods: (1) Simplified Aerosol Retrieval Algorithm (SARA); (2) Simplified Merge Scheme (SMS); and (3) Simplified Surface Reflectance Estimation Method (SREM).

Zhongfeng Qiu
Dr. Zhongfeng Qiu works as a Professor in the Department of Marine Sciences, Nanjing University of Information Science and Technology, Nanjing, China. Dr Qiu is a team leader of the laboratory of marine optics and working on marine optics, air pollution, and climate change. Apart from these, Dr. Qiu has supervised many Chinese and international masters and Ph.D. students.

Mansour Almazroui
Prof. Mansour Almazroui holds a Ph.D. in Climate Change from the Climatic Research Unit, University of East Anglia, Norwich, UK. He is the founder and Director of Center of Excellence for Climate Change Research and Head of the Department of Meteorology at King Abdulaziz University, Jeddah, Saudi Arabia. He is a member of the Board of Directors of the National Meteorological Center, Saudi Arabia. He is also working as a consultant at the General Authority of Meteorology and Environmental Protection, Saudi Arabia.
Zoom | Orient | As Lines | As Sticks | As Cartoon | As Surface | Previous Scene | Next Scene
We use cookies on our website to ensure you get the best experience. Read more about our cookies here.
Accept
We have just recently launched a new version of our website. Help us to further improve by taking part in this short 5 minute survey here. here.
Never show this again