Comparison of Aerosol Optical Depth from MODIS Product Collection 6.1 and AERONET in the Western United States

Recent observations reveal that dust storms are increasing in the western USA, posing imminent risks to public health, safety, and the economy. Much of the observational evidence has been obtained from ground-based platforms and the visual interpretation of satellite imagery from limited regions. Comprehensive satellite-based observations of long-term aerosol records are still lacking. In an effort to develop such a satellite aerosol dataset, we compared and evaluated the Aerosol Optical Depth (AOD) from Deep Blue (DB) and Dark Target (DT) product collection 6.1 with the Aerosol Robotic Network (AERONET) program in the western USA. We examined the seasonal and monthly average number of Moderate Resolution Imaging Spectroradiometer (MODIS) Aqua DB AOD retrievals per × from January 2003 to December 2017 across the region’s different topographic, climatic, and land cover conditions. The number of retrievals in the southwest United States was on average greater than 37 days per 90 days for all seasons except summer. Springtime saw the highest number of AOD retrievals across the southwest, consistent with the peak season for synoptic-scale dust events. The majority of Arizona, New Mexico, and western Texas showed the lowest number of retrievals during the monsoon season. The majority of collocating domains of AOD from the Aqua sensor showed a better correlation with AERONET AOD than AOD from Terra, and the correlation coefficients exhibited large regional variability across the study area. The correlation coefficient between the couplings Aqua DB AOD-AERONET AOD and Terra DB AOD-AERONET AOD ranges from 0.1 to 0.94 and 0.001 to 0.94, respectively. In the majority of the sites that exhibited less than a 0.6 correlation coefficient and few matched data points at the nearest single pixel, the correlations gradually improved when the spatial domain increased to a 50 km × 50 km box averaging domain. In general, the majority of the stations revealed significant correlation between MODIS and AERONET AOD at all spatiotemporal aggregating domains, although MODIS generally overestimated AOD compared to AERONET. However, the correlation coefficient in the southwest United States was the lowest and in stations from a higher latitude was the highest. The difference in the brightness of the land surface and the latitudinal differences in the aerosol inputs from the forest fires and solar zenith angles are some of the factors that manifested the latitudinal correlation differences. View Full-Text
Keywords: aerosols; MODIS; AERONET; deep blue; dark target; Angstrom exponent aerosols; MODIS; AERONET; deep blue; dark target; Angstrom exponent
►▼ Show Figures 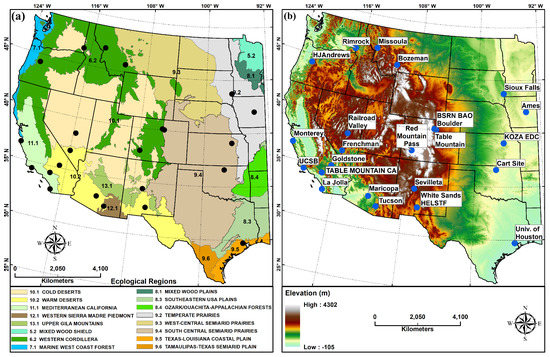