In this paper, we present long-term observations of the multiwavelength Raman lidar Polly conducted in the framework of the DACAPO-PESO campaign. Regardless of the relatively clean atmosphere in the southern mid-latitude oceans region, we regularly observed events of long-range transported smoke, originating either from regional sources in South America or from Australia. Two case studies will be discussed, both identified as smoke events that occurred on 5 February 2019 and 11 March 2019. For the first case considered, the lofted smoke layer was located at an altitude between 1.0 and 4.2 km, and apart from the predominance of smoke particles, particle linear depolarization values indicated the presence of dust particles. Mean lidar ratio values at 355 and 532 nm were 49 ± 12 and 24 ± 18 sr respectively, while the mean particle linear depolarization was 7.6 ± 3.6% at 532 nm. The advection of smoke and dust particles above Punta Arenas affected significantly the available cloud condensation nuclei (CCN) and ice nucleating particles (INP) in the lower troposphere, and effectively triggered the ice crystal formation processes. Regarding the second case, the thin smoke layers were observed at altitudes 5.5–7.0, 9.0 and 11.0 km. The particle linear depolarization ratio at 532 nm increased rapidly with height, starting from 2% for the lowest two layers and increasing up to 9.5% for the highest layer, indicating the possible presence of non-spherical coated soot aggregates. INP activation was effectively facilitated. The long-term analysis of the one year of observations showed that tropospheric smoke advection over Punta Arenas occurred 16 times (lasting from 1 to 17 h), regularly distributed over the period and with high potential to influence cloud formation in the otherwise pristine environment of the region. View Full-Text
Keywords: biomass burning aerosols; tropospheric aerosol; Raman lidar; Punta Arenas; DACAPO-PESO biomass burning aerosols; tropospheric aerosol; Raman lidar; Punta Arenas; DACAPO-PESO
►▼ Show Figures 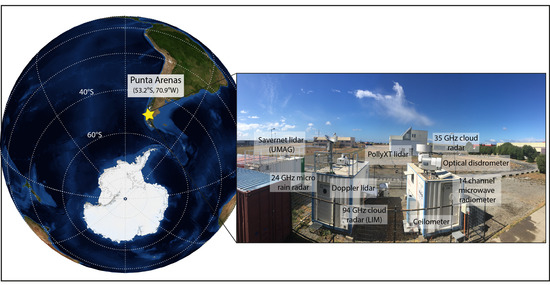