Two tailored configurations of the Robust Satellite Technique (RST) multi-temporal approach, for airborne volcanic ash and desert dust detection, have been tested in the framework of the European Natural Airborne Disaster Information and Coordination System for Aviation (EUNADICS-AV) project. The two algorithms, running on Spinning Enhanced Visible Infra-Red Imager (SEVIRI) data, were previously assessed over wide areas by comparison with independent satellite-based aerosol products. In this study, we present results of a first validation analysis of the above mentioned satellite-based ash/dust products using independent, ground-based observations coming from the European Aerosol Research Lidar Network (EARLINET). The aim is to assess the capabilities of RST-based ash/dust products in providing useful information even at local scale and to verify their applicability as a “trigger” to timely activate EARLINET measurements during airborne hazards. The intense Saharan dust event of May 18–23 2008—which affected both the Mediterranean Basin and Continental Europe—and the strong explosive eruptions of Eyjafjallajökull (Iceland) volcano of April–May 2010, were analyzed as test cases. Our results show that both RST-based algorithms were capable of providing reliable information about the investigated phenomena at specific sites of interest, successfully detecting airborne ash/dust in different geographic regions using both nighttime and daytime SEVIRI data. However, the validation analysis also demonstrates that ash/dust layers remain undetected by satellite in the presence of overlying meteorological clouds and when they are tenuous (i.e., with an integrated backscatter coefficient less than ~0.001 sr−1 and with aerosol backscatter coefficient less than ~1 × 10−6 m−1sr−1). This preliminary analysis confirms that the continuity of satellite-based observations can be used to timely “trigger” ground-based LIDAR measurements in case of airborne hazard events. Finally, this work confirms that advanced satellite-based detection schemes may provide a relevant contribution to the monitoring of ash/dust phenomena and that the synergistic use of (satellite-based) large scale, continuous and timely records with (ground-based) accurate and quantitative measurements may represent an added value, especially in operational scenarios. View Full-Text
Keywords: ash clouds; dust outbreaks; SEVIRI; EARLINET; RST ash clouds; dust outbreaks; SEVIRI; EARLINET; RST
►▼ Show Figures 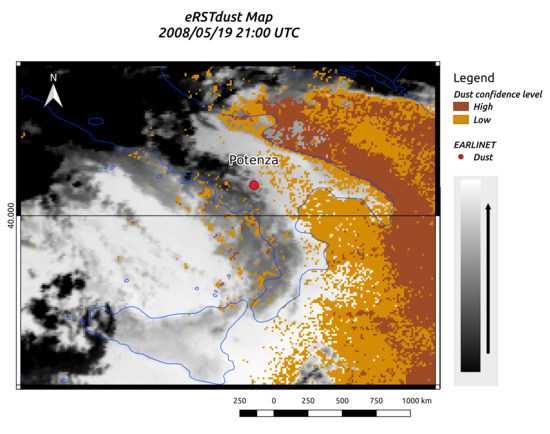