Constraints on Complex Faulting during the 1996 Ston–Slano (Croatia) Earthquake Inferred from the DInSAR, Seismological, and Geological Observations

This study, involving remote sensing, seismology, and geology, revealed complex faulting during the mainshock of the Ston–Slano earthquake sequence (5 September, 1996, Mw = 6.0). The observed DInSAR interferogram fringe patterns could not be explained by a single fault rupture. Geological investigations assigned most of the interferogram features either to previously known faults or to those newly determined by field studies. Relocation of hypocentres and reassessment of fault mechanisms provided additional constraints on the evolution of stress release during this sequence. Available data support the scenario that the mainshock started with a reverse rupture with a left-lateral component on the Slano fault 4.5 km ESE of Slano, at the depth of about 11 km. The rupture proceeded unilaterally to the NW with the velocity of about 1.5 km/s for about 11 km, where the maximum stress release occurred. DInSAR interferograms suggest that several faults were activated in the process. The rupture terminated about 20 km away from the epicentre, close to the town of Ston, where the maximum DInSAR ground displacement reached 38 cm. Such a complicated and multiple rupture has never before been documented in the Dinarides. If this proves to be a common occurrence, it can pose problems in defining realistic hazard scenarios, especially in deterministic hazard assessment. View Full-Text
Keywords: southern Dinarides; Ston–Slano earthquake; earthquake relocation; DInSAR; complex faulting; coseismic deformation analysis southern Dinarides; Ston–Slano earthquake; earthquake relocation; DInSAR; complex faulting; coseismic deformation analysis
►▼ Show Figures 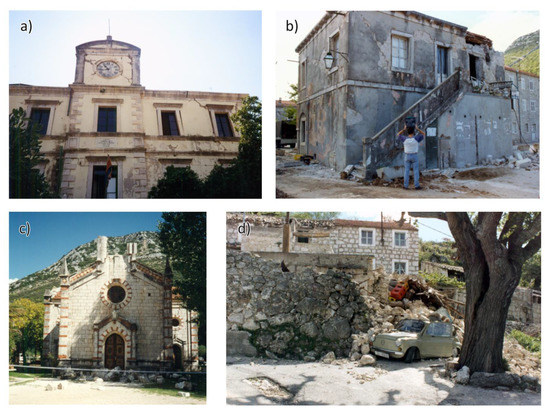 Govorčin, M.; Herak, M.; Matoš, B.; Pribičević, B.; Vlahović, I. Constraints on Complex Faulting during the 1996 Ston–Slano (Croatia) Earthquake Inferred from the DInSAR, Seismological, and Geological Observations. Remote Sens. 2020, 12, 1157.


Govorčin M, Herak M, Matoš B, Pribičević B, Vlahović I. Constraints on Complex Faulting during the 1996 Ston–Slano (Croatia) Earthquake Inferred from the DInSAR, Seismological, and Geological Observations. Remote Sensing. 2020; 12(7):1157.