Sea breeze (SB) phenomena may strongly influence air quality and lead to important effects on human health. In order to study the impact of SB dynamics on the properties and toxicity of aerosols, an atmospheric mobile unit was deployed during a field campaign performed in an urbanized and industrialized coastal area in Northern France. This unit combines aerosol samplers, two scanning lidars (Doppler and elastic) and an air-liquid interface (ALI, Vitrocell®) in vitro cell exposure device. Our study highlights that after the passage of an SB front, the top of the atmospheric boundary layer collapses as the thermal internal boundary layer (TIBL) develops, which leads to high aerosol extinction coefficient values (>0.4 km−1) and an increase of PM2.5 and NOx concentrations in the SB current. The number-size distribution of particles indicates a high proportion of fine particles (with diameter below 500 nm), while the volume-size distribution shows a major mode of coarse particles centered on 2–3 µm. Individual particle analyses performed by cryo-transmission scanning electron microscopy (cryo-TSEM)-EDX highlights that submicronic particles contained a high fraction of secondary compounds, which may result from nucleation and/or condensation of condensable species (vapors or gaseous species after photo-oxidation). Secondary aerosol (SA) formation can be enhanced in some areas, by the interaction between the SB flow and the upper continental air mass, particularly due to the effect of both turbulence and temperature/humidity gradients between these two contrasting air masses. Potential areas of SA formation are located near the ground, during the SB front passage and in the vicinity of the SB current top. During the sea breeze event, an increase in the oxidative stress and inflammation processes in exposed lung cells, compared to the unexposed cells, can also be seen. In some instances, short singularity periods are observed during SB, corresponding to a double flow structure. It consists of two adjacent SB currents that induce an important increase of the TIBL top, improving the pollutants dispersion. This is associated with a substantial decrease of aerosol mass concentrations. View Full-Text
Keywords: air quality; lidar; sea breeze; atmospheric boundary layer; atmospheric dynamics; aerosols; toxicology air quality; lidar; sea breeze; atmospheric boundary layer; atmospheric dynamics; aerosols; toxicology
►▼ Show Figures 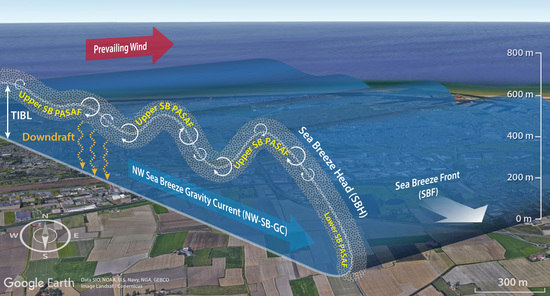