Remote sensing technologies can play a fundamental role in the environmental assessment of open-cast mining and the accurate quantification of mine land rehabilitation efforts. Here, we developed a systematic geographic object-based image analysis (GEOBIA) approach to map the amount of revegetated area and quantify the land use changes in open-cast mines in the Carajás region in the eastern Amazon, Brazil. Based on high-resolution satellite images from 2011 to 2015 from different sensors (GeoEye, WorldView-3 and IKONOS), we quantified forests, cangas (natural metalliferous savanna ecosystems), mine land, revegetated areas and water bodies. Based on the GEOBIA approach, threshold values were established to discriminate land cover classes using spectral bands, the normalized difference vegetation index (NDVI), normalized difference water index (NDWI) and a light detection and range sensor (LiDAR) digital terrain model and slope map. The overall accuracy was higher than 90%, and the kappa indices varied between 0.82 and 0.88. During the observation period, the mining complex expanded, which led to the conversion of canga and forest vegetation to mine land. At the same time, the amount of revegetated area increased. Thus, we conclude that our approach is capable of providing consistent information regarding land cover changes in mines, with a special focus on the amount of revegetation necessary to fulfill environmental liabilities. View Full-Text
Keywords: GEOBIA; canga ecosystem; Carajás National Forest; mine land revegetation; satellite images; environmental assessment GEOBIA; canga ecosystem; Carajás National Forest; mine land revegetation; satellite images; environmental assessment
►▼ Show Figures 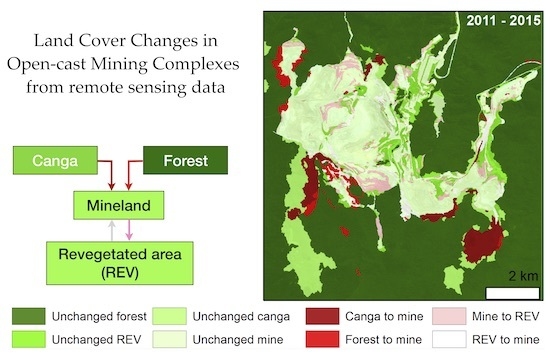