High-frequency (HF) radars are efficient tools for measuring vast areas and gathering ocean parameters in real-time. However, the accuracy of their wave estimates is under analysis. This paper presents a new methodology for analyzing and validating the wave data estimated by two CODAR SeaSonde radars located on the Galician coast (NW Spain). Approximately one and a half years of wave data (January, 2014–April, 2015) were obtained for ten range cells employing two different sampling times used by the radar software. The resulting data were screened by an updated method, and their abundance and quality were described for each radar range cell and different wave regime; the latter were defined using the spectral significant wave height (Hm0) and mean wave direction (Dm) estimated by two buoys and three SIMAR points (SImulación MARina in Spanish, from the wave reanalysis model by Puertos del Estado (PdE)). The correlation between the results and the particularities of the different sea states (broadband or bimodal), the wind and the operation of the devices are discussed. Most HF radar wave parameters’ errors occur for waves from the NNE and higher than 6 m. The best agreement between the Vilán radar and the Vilano-Sisargas buoy wave data was obtained for the dominant wave regime (from the northwest) and the southwest wave regime. However, relevant contradictions regarding wave direction were detected. The possibilities of reducing the wave parameters’ processing time by one hour and increasing the numbers of range cells of the radars have been validated. View Full-Text
Keywords: HF radar; wave regime; wave modeling; remote sensing HF radar; wave regime; wave modeling; remote sensing
►▼ Show Figures 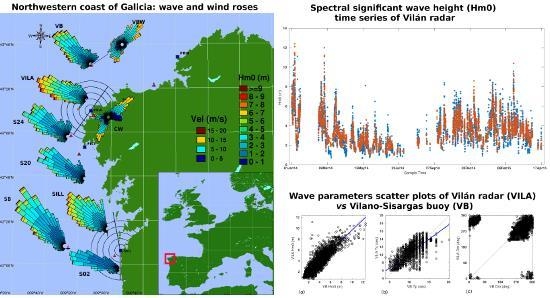