Land change is a key topic in research on global environmental change, and the restoration of degraded land is the core component of the global Land Degradation Neutrality target under the UN 2030 Agenda for Sustainable Development. In this study, remote-sensing-derived land-use data were used to characterize the land-change processes in China’s Loess Plateau, which is experiencing large-scale ecological restoration. Geographically Weighted Regression was applied to capture the spatiotemporal variations in land change and driving-force relationships. First, we explored land-use change in the Loess Plateau for the period 1990–2015. Grassland, cropland and forestland were dominant land cover in the region, with a total percentage area of 88%. The region experienced dramatic land-use transitions during the study period: degraded grassland and wetland, expansion of cropland and built-up land and weak restoration of forestland during 1990–2000; and increases in grassland, built-up land, forestland and wetland, concurrent with shrinking cropland during 2000–2015. A Geographically Weighted Regression (GWR) analysis revealed altitude to be the common dominant factor associated with the four major land-use types (forestland, grassland, cropland and built-up land). Altitude and slope were found to be positively associated with forestland, while being negatively associated with cropland in the high, steep central region. For both forestland and grassland, temperature and precipitation behaved in a similar manner, with a positive hotspot in the northwest. Altitude, slope and distance to road were all negatively associated with built-up land across the region. The GWR captured the spatial non-stationarity on different socioeconomic driving forces. Spatial heterogeneity and temporal variation of the impact of socioeconomic drivers indicate that the ecological restoration projects positively affected the region’s greening trend with hotspots in the center and west, and also improved farmer well-being. Notably, urban population showed undesired effects, expressed in accelerating grassland degradation in central and western regions for 1990–2000, hindering forestland and grassland restoration in the south during 2000–2015, and highlighting the long-term sustainability of the vegetation restoration progress. Such local results have the potential to provide a methodological contribution (e.g., nesting local-level approaches, i.e., GWR, within land system research) and spatially explicit evidence for context-related and proactive land management (e.g., balancing urbanization and ecological restoration processes and advancing agricultural development and rural welfare improvement). View Full-Text
Keywords: land change; ecological restoration; driving factors; Geographically Weighted Regression; land management land change; ecological restoration; driving factors; Geographically Weighted Regression; land management
►▼ Show Figures 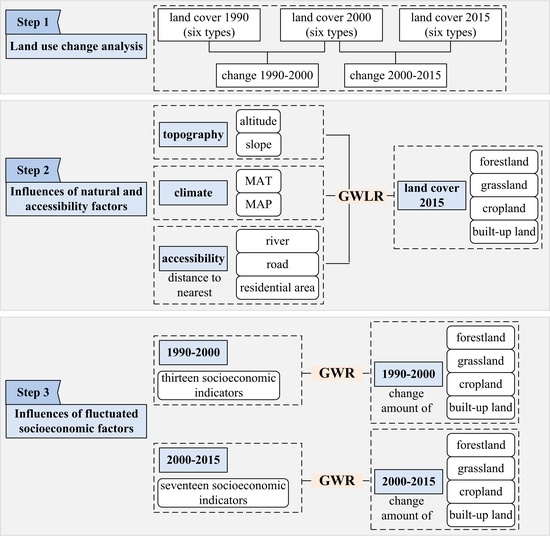