Impact of Molecular Spectroscopy on Carbon Monoxide Abundances from TROPOMI

The impact of SEOM–IAS (Scientific Exploitation of Operational Missions–Improved Atmospheric Spectroscopy) spectroscopic information on columns from TROPOMI (Tropospheric Monitoring Instrument) shortwave infrared (SWIR) observations was examined. HITRAN 2016 (High Resolution Transmission) and GEISA 2015 (Gestion et Etude des Informations Spectroscopiques Atmosphériques 2015) were used as a reference upon which the spectral fitting residuals, retrieval errors and inferred quantities were assessed. It was found that SEOM–IAS significantly improves the quality of the retrieval by reducing the residuals to TROPOMI observations. The magnitude of the impact is dependent on the climatological region and spectroscopic reference used. The difference in the columns was found to be rather small, although discrepancies reveal, for selected scenes, in particular, for observations with elevated molecular concentrations. A brief comparison to Total Column Carbon Observing Network (TCCON) and Network for the Detection of Atmospheric Composition Change (NDACC) also demonstrated that both spectroscopies cause similar columns; however, the smaller retrieval errors in the SEOM with Speed-Dependent Rautian and line-Mixing (SDRM) inferred turned out to be beneficial in the comparison of post-processed mole fractions with ground-based references. View Full-Text
Keywords: infrared; radiative transfer; molecular absorption; line-by-line; line profiles infrared; radiative transfer; molecular absorption; line-by-line; line profiles
►▼ Show Figures 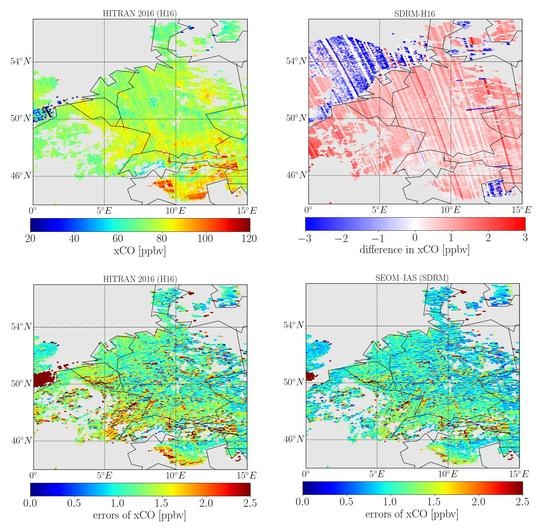