Freely available global digital elevation models (DEMs) are important inputs for many research fields and applications. During the last decade, several global DEMs have been released based on satellite data. ASTER and SRTM are the most widely used DEMs, but the more recently released, AW3D30, TanDEM-X and MERIT, are being increasingly used. Many researchers have studied the quality of these DEM products in recent years. However, there has been no comprehensive and systematic evaluation of their quality over areas with variable topography and land cover conditions. To provide this comparison, we examined the accuracy of six freely available global DEMs (ASTER, AW3D30, MERIT, TanDEM-X, SRTM, and NASADEM) in four geographic regions with different topographic and land use conditions. We used local high-precision elevation models (Light Detection and Ranging (LiDAR), Pleiades-1A) as reference models and all global models were resampled to reference model resolution (1m). In total, 608 million 1x1 m pixels were analyzed. To estimate the accuracy, we generated error rasters by subtracting each reference model from the corresponding global DEM and calculated descriptive statistics for this difference (e.g., median, mean, root-mean-square error (RMSE)). We also assessed the vertical accuracy as a function of the slope, slope aspect, and land cover. We found that slope had the strongest effect on DEM accuracy, with no relationship for slope aspect. The AW3D30 was the most robust and had the most stable performance in most of the tests and is therefore the best choice for an analysis of multiple geographic regions. SRTM and NASADEM also performed well where available, whereas NASADEM, as a successor of SRTM, showed only slight improvement in comparison to SRTM. MERIT and TanDEM-X also performed well despite their lower spatial resolution. View Full-Text
Keywords: DEM; validation; accuracy assessment; slope; aspect; topography; land cover DEM; validation; accuracy assessment; slope; aspect; topography; land cover
►▼ Show Figures 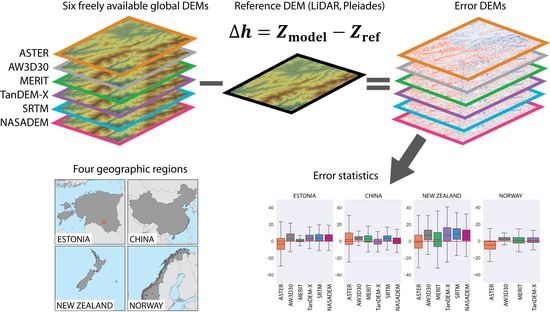