Insar Maps of Land Subsidence and Sea Level Scenarios to Quantify the Flood Inundation Risk in Coastal Cities: The Case of Singapore

Global mean sea level rise associated with global warming has a major impact on coastal areas and represents one of the significant natural hazards. The Asia-Pacific region, which has the highest concentration of human population in the world, represents one of the larger areas on Earth being threatened by the rise of sea level. Recent studies indicate a global sea level of 3.2 mm/yr as measured from 20 years of satellite altimetry. The combined effect of sea level rise and local land subsidence, can be overwhelming for coastal areas. The Synthetic Aperture Radar (SAR) interferometry technique is used to process a time series of TerraSAR-X images and estimate the land subsidence in the urban area of Singapore. Interferometric SAR (InSAR) measurements are merged to the Representative Concentration Pathway (RCP) 4.5 and RCP 8.5 sea-level rise scenarios to identify projected inundated areas and provide a map of flood vulnerability. Subsiding rates larger than 5 mm/year are found near the shore on the low flat land, associated to areas recently reclaimed or built. The projected flooded map of Singapore are provided for different sea-level rise scenarios. In this study, we show that local land subsidence can increase the flood vulnerability caused by sea level rise by 2100 projections. This can represent an increase of 25% in the flood area in the central area of Singapore for the RCP4.5 scenario. View Full-Text
Keywords: climate change; subsidence; Synthetic Aperture Radar (SAR); SAR interferometry (InSAR); Singapore climate change; subsidence; Synthetic Aperture Radar (SAR); SAR interferometry (InSAR); Singapore
►▼ Show Figures 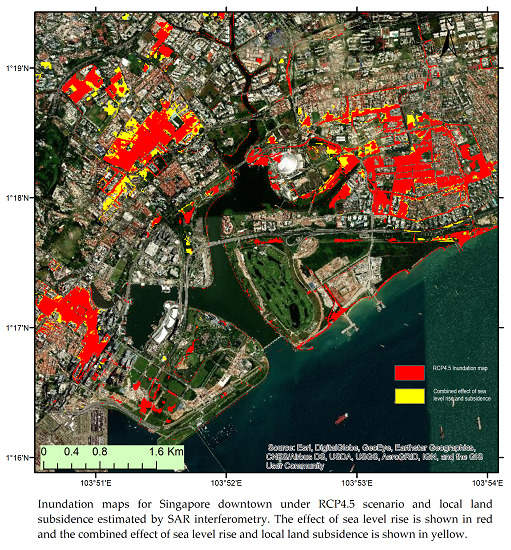