Oil palm cultivation in Ecuador is important for the agricultural sector. As a result of it, the country generates sources of employment in some of the most vulnerable zones; it contributes 0.89% of the gross domestic product and 4.35% of the agricultural gross domestic product. In 2017, a value of USD $252 million was generated by exports, and palm contributed 4.53% of the agricultural gross domestic product (GDP). It is estimated that 125,000 hectares of palm were lost in the Republic of Ecuador due to Red Ring Disease (RRD) and specifically Bud Rot (BR). The current study aimed to generate an early detection of BR and RRD in oil palm. Image acquisition has been performed using Remotely Piloted Aircraft System (RPAS) with Red, Green, and Blue (RGB) cannons, and multispectral cameras, in study areas with and without the presence of the given disease. Hereby, we proposed two phases. In phase A, a drone flight has been conducted for processing and georeferencing. This allowed to obtain an orthomosaic that serves as input for obtaining several vegetation indices of the healthy crop. The data and products obtained from this phase served as a baseline to perform comparisons with plantations affected by BR and RRD and to differentiate the palm varieties that are used by palm growers. In phase B, the same process has been applied three times with an interval of 15 days in an affected plot, in order to identify the symptoms and the progress of them. A validation for the diseases detection has been performed in the field, by taking Global Positioning System (GPS) points of the palms that presented symptoms of BR and RRD, through direct observation by field experts. The inputs obtained in each monitoring allowed to analyze the spatial behavior of the diseases. The values of the vegetation indices obtained from Phase A and B aimed to establish the differences between healthy and diseased palms, with the purpose of generating the baseline of early responses of BR and RRD conditions. However, the best vegetation index to detect the BR was the Visible Atmospherically Resistant Index (VARI). View Full-Text
Keywords: precision agriculture; detection of diseases; RPAS; NDVI; VARI; GNDVI; oil palm precision agriculture; detection of diseases; RPAS; NDVI; VARI; GNDVI; oil palm
►▼ Show Figures 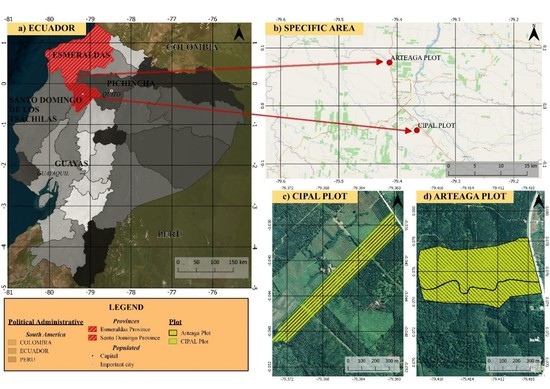