From Drones to Phenotype: Using UAV-LiDAR to Detect Species and Provenance Variation in Tree Productivity and Structure
Next Article in Special Issue

Hyperspectral and Thermal Sensing of Stomatal Conductance, Transpiration, and Photosynthesis for Soybean and Maize under Drought
Previous Article in Special Issue

Sea-ice concentration (SIC) data with fine spatial resolution and spatially continuous coverage are needed, for example, for estimating heat fluxes. Passive microwave measurements of the Advanced Scanning Microwave Radiometer 2 (AMSR2) offer spatial continuity, but are limited to spatial resolutions of 5 km and coarser. Thermal infrared data of the Moderate Resolution Imaging Spectroradiometer (MODIS) provide a spatial resolution of 1 km, but are limited to cloud-free scenes. We exploit the benefits of both and present a merged SIC dataset with 1 km spatial resolution and spatially continuous coverage for the Arctic. MODIS and AMSR2 SIC are retrieved separately and then merged by tuning the MODIS SIC to preserve the mean AMSR2 SIC. We first evaluate the variability of the dynamically retrieved MODIS ice tie-point. Varying the starting position of the area used for the tie-point retrieval changes the MODIS SIC by on average 1.9%, which we mitigate by considering different starting positions and using the average as ice tie-point. Furthermore, the SIC datasets are evaluated against a reference dataset derived from Sentinel-2A/B reflectances between February and May 2019. We find that the merged SIC are 1.9% smaller than the reference SIC if thin ice is considered as ice and 4.9% higher if thin ice is considered as water. There is only a slight bias (0.3%) between the MODIS and the merged SIC; however, the root mean square deviation of 5% indicates that the two datasets do yield different results. In an example of poor-quality MODIS SIC, we identify an unscreened cloud and high ice-surface temperature as reasons for the poor quality. Still, the merged SIC are of similar quality as the passive microwave SIC in this example. The benefit of merging MODIS and AMSR2 data is demonstrated by showing that the finer resolution of the merged SIC compared to the AMSR2 SIC allows an enhanced potential for the retrieval of leads. At the same time, the data are available regardless of clouds. Last, we provide uncertainty estimates. The MODIS and merged SIC uncertainty are between 5% and 10% from February to April and increase up to 25% (merged SIC) and 35% (MODIS SIC) in May. They are identified as conservative uncertainty estimates. View Full-Text
Keywords: arctic; sea-ice concentration; fine spatial resolution; merging; thermal infrared; passive microwave; uncertainties; MODIS; AMSR2 arctic; sea-ice concentration; fine spatial resolution; merging; thermal infrared; passive microwave; uncertainties; MODIS; AMSR2
►▼ Show Figures 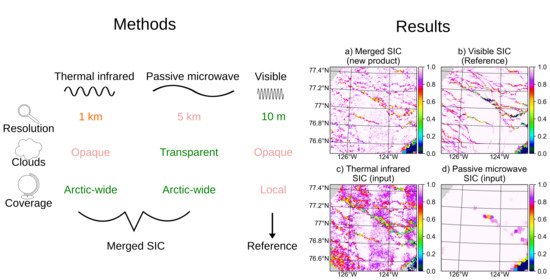