Infrared (IR) radiometers from geostationary (GEO) satellites have an advantage over low-earth orbiting (LEO) satellites as they provide continuous observations to monitor the diurnal variations in the sea surface temperature (SST), typically better than 30-minute interval. However, GEO satellite observations suffer from significant diurnal and seasonal biases arising due to varying sun-earth-satellite geometry, leading to biases in SST estimates from conventional non-linear regression-based algorithms (NLSST). The midnight calibration issue occurring in GEO sensors poses a different challenge altogether. To mitigate these issues, we propose SST estimation from split-window IR observations of INSAT-3D and 3DR Imagers using One-Dimensional Variational (1DVAR) scheme. Prior to SST estimation, the bias correction in Imager observations is carried out using cumulative density function (CDF) matching. Then NLSST and 1DVAR algorithms were applied on six months of INSAT-3D/3DR observations to retrieve the SST. For the assessment of the developed algorithms, the retrieved SST was validated against in-situ SST measurements available from in-situ SST Quality Monitor (iQuam) for the study period. The quantitative assessment confirms the superiority of the 1DVAR technique over the NLSST algorithm. However, both the schemes under-estimate the SST as compared to in-situ SST, which may be primarily due to the differences in the retrieved skin SST versus bulk in-situ SST. The 1DVAR scheme gives similar accuracy of SST for both INSAT-3D and 3DR with a bias of −0.36 K and standard deviation (Std) of 0.63 K. However, the NLSST algorithm provides slightly less accurate SST with bias (Std) of −0.18 K (0.87 K) for INSAT-3DR and −0.27 K (0.95 K) for INSAT-3D. Both the NLSST and 1DVAR algorithms are capable of producing the accurate thermal gradients from the retrieved SST as compared to the gradients calculated from daily Multiscale Ultrahigh Resolution (MUR) level-4 analysis SST acquired from Group for High-Resolution Sea Surface Temperature (GHRSST). Based on these spatial gradients, thermal fronts can be generated that are very useful for predicting potential fishery zones (PFZ), which is available from GEO satellites, INSAT-3D/3DR, in near real-time at 15-minute intervals. Results from the proposed 1DVAR and NLSST algorithms suggest a marked improvement in the SST estimates with reduced diurnal/seasonal biases as compared to the operational NLSST algorithm. View Full-Text
Keywords: SST; variational technique; split-window technique; thermal gradients; INSAT-3D/3DR SST; variational technique; split-window technique; thermal gradients; INSAT-3D/3DR
►▼ Show Figures 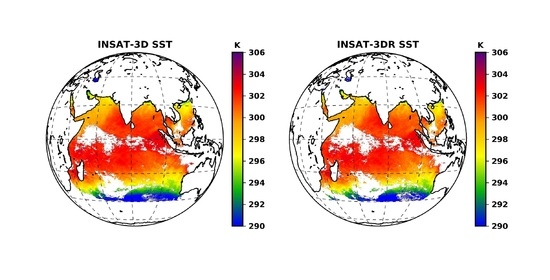