Validation of Sentinel-3A Based Lake Level over US and Canada

Satellite altimetry is an important contributor for measuring the water level of continental water bodies. The technique has been applied for almost three decades. In this period the data quality has increased and the applications have evolved from the study of a few large lakes and rivers, to near global applications at various scales. Products from current satellite altimetry missions should be validated to continuously improve the measurements. Sentinel-3A has been operating since 2016 and is the first mission operating in synthetic aperture radar (SAR) mode globally. Here we evaluate its performance in capturing lake level variations based on a physical and an empirical retracker provided in the official level 2 product. The validation is performed for more than 100 lakes in the United States and Canada where the altimetry based water levels are compared with in situ data. As validation measures we consider the root mean squared error, the Pearson correlation, and the percentage of outliers. For the US sites the median of the RMSE value is 25 cm and 19 cm and the median of the Pearson correlations are 0.86 and 0.93 for the physical and empirical retracker, respectively. The percentage of outliers (median) is 11% for both retrackers. The validations measures are slightly poorer for the Canadian sites; the median RMSE is approximately 5 cm larger, the Pearson correlation 0.1 lower, and the percentage of outliers 5% larger. The poorer performance for the Canadian sites is mainly related to the presence of lake ice in the winter period where the surface elevations are not able to map the surface correctly. The validation measures improve considerably when evaluated for summer data only. For both areas we show that the reconstruction of the water level variations based on the empirical retracker is significantly better compared to that of the physical retracker in terms of the RMSE and the Pearson correlation. View Full-Text
Keywords: Sentinel-3A; inland water; validation Sentinel-3A; inland water; validation
►▼ Show Figures 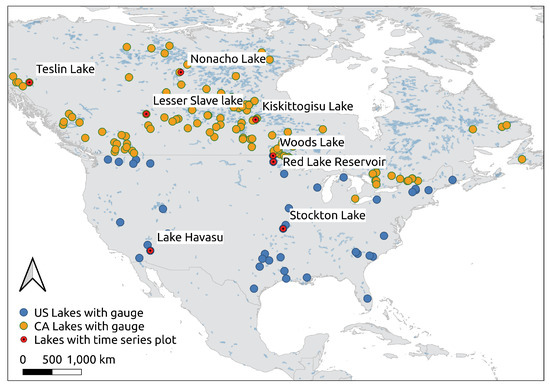