Bogs, as nutrient-poor ecosystems, are particularly sensitive to atmospheric nitrogen (N) deposition. Nitrogen deposition alters bog plant community composition and can limit their ability to sequester carbon (C). Spectroscopy is a promising approach for studying how N deposition affects bogs because of its ability to remotely determine changes in plant species composition in the long term as well as shorter-term changes in foliar chemistry. However, there is limited knowledge on the extent to which bog plants differ in their foliar spectral properties, how N deposition might affect those properties, and whether subtle inter- or intraspecific changes in foliar traits can be spectrally detected. The objective of the study was to assess the effect of N deposition on foliar traits and spectra. Using an integrating sphere fitted to a field spectrometer, we measured spectral properties of leaves from the four most common vascular plant species (Chamaedaphne calyculata, Kalmia angustifolia, Rhododendron groenlandicum and Eriophorum vaginatum) in three bogs in southern Québec and Ontario, Canada, exposed to different atmospheric N deposition levels, including one subjected to a 18-year N fertilization experiment. We also measured chemical and morphological properties of those leaves. We found detectable intraspecific changes in leaf structural traits and chemistry (namely chlorophyll b and N concentrations) with increasing N deposition and identified spectral regions that helped distinguish the site-specific populations within each species. Most of the variation in leaf spectral, chemical, and morphological properties was among species. As such, species had distinct spectral foliar signatures, allowing us to identify them with high accuracy with partial least squares discriminant analyses (PLSDA). Predictions of foliar traits from spectra using partial least squares regression (PLSR) were generally accurate, particularly for the concentrations of N and C, soluble C, leaf water, and dry matter content (<10% RMSEP). However, these multi-species PLSR models were not accurate within species, where the range of values was narrow. To improve the detection of short-term intraspecific changes in functional traits, models should be trained with more species-specific data. Our field study showing clear differences in foliar spectra and traits among species, and some within-species differences due to N deposition, suggest that spectroscopy is a promising approach for assessing long-term vegetation changes in bogs subject to atmospheric pollution. View Full-Text
Keywords: functional traits; spectral signature; ombrotrophic bog; partial least squares regression (PLSR); partial least squares discriminant analysis (PLSDA); spectranomics; spectroscopy; peatland; reflectance functional traits; spectral signature; ombrotrophic bog; partial least squares regression (PLSR); partial least squares discriminant analysis (PLSDA); spectranomics; spectroscopy; peatland; reflectance
►▼ Show Figures 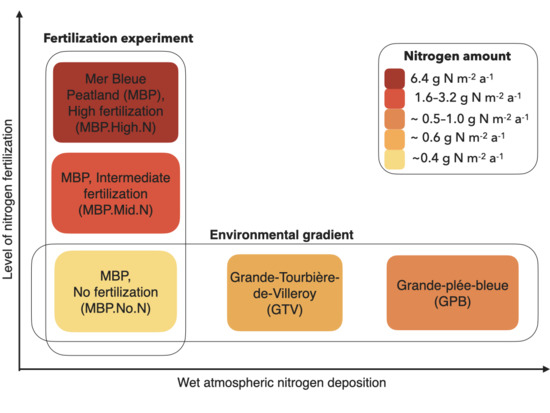