Satellite-based ocean color sensors have provided an unprecedentedly large amount of information on ocean, coastal and inland waters at varied spatial and temporal scales. However, observations are often adversely affected by cloud coverage and other poor weather conditions, like sun glint, and this influences the accuracy associated with long-term monitoring of water quality parameters. This study uses long-term (2013–2017) and high-frequency (eight observations per day) datasets from the Geostationary Ocean Color Imager (GOCI), the first geostationary ocean color satellite sensor, to quantify the cloud coverage over China’s seas, the resultant interrupted observations in remote sensing, and their impacts on the retrieval of total suspended sediments (TSS). The monthly mean cloud coverage for the East China Sea (ECS), Bohai Sea (BS) and Yellow Sea (YS) were 62.6%, 67.3% and 69.9%, respectively. Uncertainties regarding the long-term retrieved TSS were affected by a combination of the effects of cloud coverage and TSS variations. The effects of the cloud coverage dominated at the monthly scale, with the mean normalized bias (Pbias) at 14.1% (±2.6%), 7.6% (±2.3%) and 12.2% (±4.3%) for TSS of the ECS, BS and YS, respectively. Cloud coverage-interfering observations with the Terra/Aqua MODIS systems were also estimated, with monthly Pbias ranging from 6.5% (±7.4%) to 20% (±13.1%) for TSS products, and resulted in a smaller data range and lower maximum to minimum ratio compared to the eight GOCI observations. Furthermore, with approximately 16.7% monthly variations being missed during the periods, significant “missing trends” effects were revealed in monthly TSS variations from Terra/Aqua MODIS. For the entire region and the Bohai Sea, the most appropriate timeframe for sampling ranges from 12:30 to 15:30, while this timeframe was narrowed to from 13:30 to 15:30 for observations in the East China Sea and the Yellow Sea. This research project evaluated the effects of cloud coverage and times for sampling on the remote sensing monitoring of ocean color constituents, which would suggest the most appropriate timeframe for ocean color sensor scans, as well as in situ data collection, and can provide design specification guidance for future satellite sensor systems. View Full-Text
Keywords: ocean color; remote sensing; sampling uncertainty; GOCI; Terra/Aqua MODIS; cloud coverage; suspended sediment ocean color; remote sensing; sampling uncertainty; GOCI; Terra/Aqua MODIS; cloud coverage; suspended sediment
►▼ Show Figures 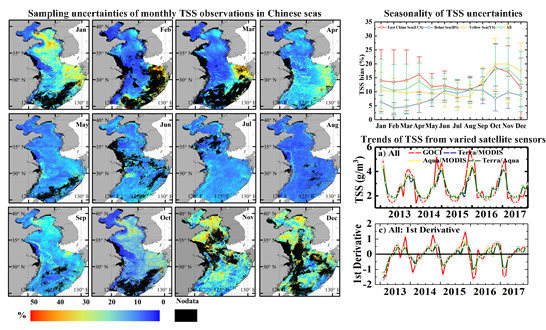