Landmarks as Cultural Heritage Assets Affecting the Distribution of Settlements in Rural Areas—An Analysis Based on LIDAR DTM, Digital Photographs, and Historical Maps

The final decision of the owner of the plot who plans to build a house depends on many factors most of which are of legal and financial nature. The authors demonstrate that the decisions regarding specific location within the plot of land are influenced by intangible components as well, namely the intention to have the best view. The view is often related to the occurrence of landmarks with prominent visual impact in the landscape that determine visual connections. The rural landscape is determined by the spatial arrangement including the buildings, the shape of public spaces, ownership divisions, and the land distribution. Being an element of rural cultural heritage, the arrangement of buildings is influenced by a vast number of factors such as geographical, historical, physical, and socio-economic ones. This article focuses on determining the interaction between the settlement locations and zones with an excellent, unique view of characteristic, well-known architectural landmarks. Mapping of viewsheds of many features is a critical element of the landscape planning process and facilitates the protection of cultural heritage assets. The analysis involved LiDAR DTM (Digital Terrain Model created in Light Detection and Ranging technology), digital photographs, and historical maps. In terms of the administrative subdivision, the area comprises 20 localities. The landmark visibility analysis for locations of the buildings covered a 140 km2 area of Carpathian Foothills in southern Poland. The article combines experiences in the field of landscape architecture, spatial planning and the use of Geographic Information System (GIS) technology. The examples show that the modern development layout refers to the historical structure and the development of a new settlement tissue has a cultural background and is influenced by spatial landmarks. View Full-Text
Keywords: spatial-settlement analysis; GIS tools; remote sensing; landscape identity; tall architectural landmarks; space preservation; arrangement of buildings spatial-settlement analysis; GIS tools; remote sensing; landscape identity; tall architectural landmarks; space preservation; arrangement of buildings
►▼ Show Figures 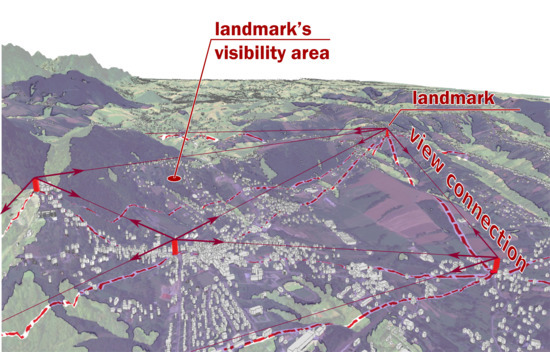