In China, freshwater is an increasingly scarce resource and wetlands are under great pressure. This study focuses on China’s second largest freshwater lake in the middle reaches of the Yangtze River—the Dongting Lake—and its surrounding wetlands, which are declared a protected Ramsar site. The Dongting Lake area is also a research region of focus within the Sino-European Dragon Programme, aiming for the international collaboration of Earth Observation researchers. ESA’s Copernicus Programme enables comprehensive monitoring with area-wide coverage, which is especially advantageous for large wetlands that are difficult to access during floods. The first year completely covered by Sentinel-1 SAR satellite data was 2016, which is used here to focus on Dongting Lake’s wetland dynamics. The well-established, threshold-based approach and the high spatio-temporal resolution of Sentinel-1 imagery enabled the generation of monthly surface water maps and the analysis of the inundation frequency at a 10 m resolution. The maximum extent of the Dongting Lake derived from Sentinel-1 occurred in July 2016, at 2465 km2, indicating an extreme flood year. The minimum size of the lake was detected in October, at 1331 km2. Time series analysis reveals detailed inundation patterns and small-scale structures within the lake that were not known from previous studies. Sentinel-1 also proves to be capable of mapping the wetland management practices for Dongting Lake polders and dykes. For validation, the lake extent and inundation duration derived from the Sentinel-1 data were compared with excerpts from the Global WaterPack (frequently derived by the German Aerospace Center, DLR), high-resolution optical data, and in situ water level data, which showed very good agreement for the period studied. The mean monthly extent of the lake in 2016 from Sentinel-1 was 1798 km2, which is consistent with the Global WaterPack, deviating by only 4%. In summary, the presented analysis of the complete annual time series of the Sentinel-1 data provides information on the monthly behavior of water expansion, which is of interest and relevance to local authorities involved in water resource management tasks in the region, as well as to wetland conservationists concerned with the Ramsar site wetlands of Dongting Lake and to local researchers. View Full-Text
Keywords: Earth observation; SAR; Sentinel–1; time series; Dongting Lake; water dynamics; floodpath lake; Ramsar Convention on Wetlands Earth observation; SAR; Sentinel–1; time series; Dongting Lake; water dynamics; floodpath lake; Ramsar Convention on Wetlands
►▼ Show Figures 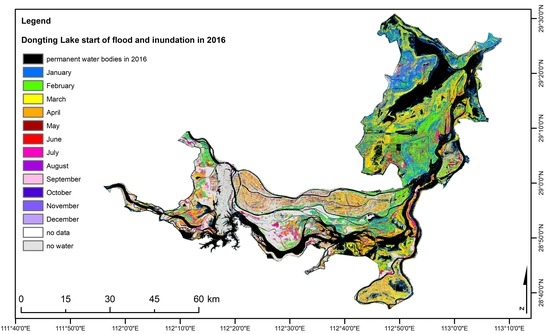