Infrastructure is operational under normal circumstances and is designed to cope with common natural disruptions such as rainfall and snow. Natural hazards can lead to severe problems at the areas where such phenomena occur, but also at neighboring regions as they can make parts of a road network virtually impassable. Landslides are one of the most devastating natural hazards worldwide, triggered by various factors that can be monitored via ground-based and/or satellite-based techniques. Cyprus is in an area of high susceptibility to such phenomena. Currently, extensive field campaigns including geotechnical drilling investigations and geophysical excavations are conducted to monitor land movements, and, at the same time, determine the geological suitability of areas. Active satellite remote sensors, namely Synthetic Aperture Radar (SAR), have been widely used for detecting and monitoring landslides and other ground deformation phenomena using Earth Observation based techniques. This paper aims to demonstrate how the use of Copernicus open-access and freely distributed datasets along with the exploitation of the open-source processing software SNAP (Sentinel’s Application Platform), provided by the European Space Agency, can be used for landslide detection, as in the case study near Pissouri, where a landslide was triggered by heavy rainfall on 15 February 2019, which caused a major disturbance to everyday commuters since the motorway connecting the cities of Limassol and Paphos remained closed for more than a month. The Coherent Change Detection (CCD) methodology was applied successfully by detecting the phenomenon under study accurately, using two indicators (the coherence difference and the normalized coherence difference). Receiver Operating Characteristic (ROC) analysis was carried out to measure their performance with the coherence difference having an overall accuracy of 93% and the normalized coherence difference having an overall accuracy of 94.8% for detecting the landslide and non-landslide areas. The probability of landslide detection was 63.2% in the case of the coherence difference and increased to 73.7% for the normalized coherence difference, whereas the probability of false alarm for both indicators was approximately 1%. View Full-Text
Keywords: coherence; change detection; landslides; rainfall; CCD; SAR; Copernicus; Sentinel-1; early warning systems coherence; change detection; landslides; rainfall; CCD; SAR; Copernicus; Sentinel-1; early warning systems
►▼ Show Figures 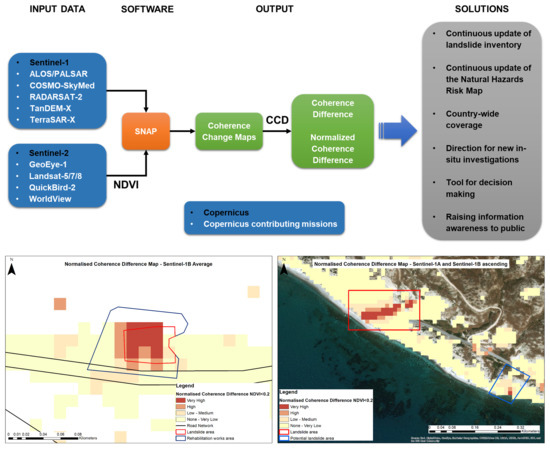