Progress in the Reconstruction of Terrain Relief Before Extraction of Rock Materials—The Case of Liban Quarry, Poland
Next Article in Special Issue

The need for accurate registration of underground objects in the 3D cadastre is becoming increasingly common throughout the world. Research studies conducted in this area mostly focus on objects related to transportation or other public utilities and services. However, in settlements with a long history, apart from new objects, there are also various historical objects underground. Such places are not fully discovered, and sometimes they are not even fully inventoried with surveying methods. The aim of this work therefore is to try to describe the possibility of introducing historical undergrounds to the real estate cadastre created for three dimensions, in case of its creation, and to check ground laser scanning as a method of measuring such objects in order to introduce them to the 3D cadastre. Considerations on the inclusion of underground historical objects into the three-dimensional cadastre database began with conceptual considerations. Their result is the elaboration of UML schemas describing relationships among 3D cadastre objects including underground objects. According to the authors, such underground objects should constitute a completely new class called ‘EGB_BuildingBlockUnderground3D’ and be part of the legal space of the entire building represented by the class ‘EGB_BuildingLegalSpace3D’ (the prefix EGB is an acronym of Polish cadastre name ‘Ewidencja Gruntów i Budynków’; in English, it stands for ‘Land and Building Cadastre’). In order to verify in practice the possibility of introducing historical underground objects into the 3D cadastre database, the inventory of the Underground Tourist Route in Rzeszów (Poland) was used. This route consists of a network of underground passageways and cellars built between the 14th and 18th centuries. The measurement was carried out with the application of the Faro Focus 3D terrestrial laser scanner. The underground inventory showed that at the time the current cadastre of land and buildings in Rzeszów was being founded, the boundaries of the cadastral parcels were established without knowing the location of the underground passageways under the Main Market Square. This resulted in a situation in which the objects located underground became parts of more than one cadastral parcel. If a 3D cadastre is created, such a situation must of course be recorded accordingly. The article proposes solutions for such situations. View Full-Text
Keywords: 3D cadastre; 3D model; heritage sites; laser scanning; underground; UML schema 3D cadastre; 3D model; heritage sites; laser scanning; underground; UML schema
►▼ Show Figures 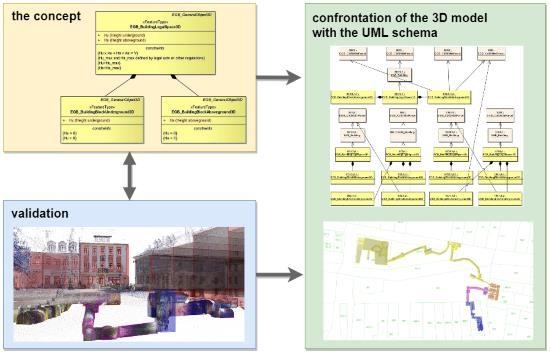