Advances in the availability of multi-temporal, remote sensing-derived global built-/human-settlements datasets can now provide globally consistent definitions of “human-settlement” at unprecedented spatial fineness. Yet, these data only provide a time-series of past extents and urban growth/expansion models have not had parallel advances at high-spatial resolution. Here our goal was to present a globally applicable predictive modelling framework, as informed by a short, preceding time-series of built-settlement extents, capable of producing annual, near-future built-settlement extents. To do so, we integrated a random forest, dasymetric redistribution, and autoregressive temporal models with open and globally available subnational data, estimates of built-settlement population, and environmental covariates. Using this approach, we trained the model on a 11 year time-series (2000–2010) of European Space Agency (ESA) Climate Change Initiative (CCI) Land Cover “Urban Areas” class and predicted annual, 100m resolution, binary settlement extents five years beyond the last observations (2011–2015) within varying environmental, urban morphological, and data quality contexts. We found that our model framework performed consistently across all sampled countries and, when compared to time-specific imagery, demonstrated the capacity to capture human-settlement missed by the input time-series and the withheld validation settlement extents. When comparing manually delineated building footprints of small settlements to the modelled extents, we saw that the modelling framework had a 12 percent increase in accuracy compared to withheld validation settlement extents. However, how this framework performs when using different input definitions of “urban” or settlement remains unknown. While this model framework is predictive and not explanatory in nature, it shows that globally available “off-the-shelf” datasets and relative changes in subnational population can be sufficient for accurate prediction of future settlement expansion. Further, this framework shows promise for predicting near-future settlement extents and provides a foundation for forecasts further into the future. View Full-Text
Keywords: Urban; growth model; forecast; built; settlement; machine learning; time series Urban; growth model; forecast; built; settlement; machine learning; time series
►▼ Show Figures 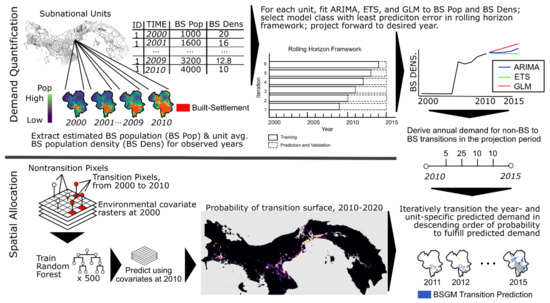