Earth Observation for the Implementation of Sustainable Development Goal 11 Indicators at Local Scale: Monitoring of the Migrant Population Distribution
Previous Article in Journal

Night-time lights satellite images provide a new opportunity to measure regional inequality in real-time by developing the Night Light Development Index (NLDI). The NLDI was extracted using the Gini coefficient approach based on population and night light spatial distribution in Romania. Night-time light data were calculated using a grid with a 0.15 km2 area, based on Defense Meteorological Satellite Program (DMSP) /Operational Linescan System (OLS satellite imagery for the 1992–2013 period and based on the National Polar-orbiting Partnership–Visible Infrared Imaging Radiometer Suite (NPP-VIIRS) satellite imagery for the 2014–2018 period. Two population density grids were created at the level of equal cells (0.15 km2) using ArcGIS and PostgreSQL software, and census data from 1992 and 2011. Subsequently, based on this data and using the Gini index approach, the Night Light Development Index (NLDI) was calculated within the MATLAB software. The NLDI was obtained for 42 administrative counties (nomenclature of territorial units for statistics level 3 (NUTS-3 units)) for the 1992–2018 period. The statistical relationship between the NLDI and the socio-economic, demographic, and geographic variables highlighted a strong indirect relationship with local tax income and gross domestic product (GDP) per capita. The polynomial model proved to be better in estimating income based on the NLDI and R2 coefficients showed a significant improvement in total variation explained compared to the linear regression model. The NLDI calculated on the basis of night-time lights satellite images proved to be a good proxy for measuring regional inequalities. Therefore, it can play a crucial role in monitoring the progress made in the implementation of Sustainable Development Goal 10 (reduced inequalities).
Keywords: sustainable development goals (SDG); regional inequality; night-time lights (NTL); Night Light Development Index sustainable development goals (SDG); regional inequality; night-time lights (NTL); Night Light Development Index

At the United Nations (UN) Sustainable Development Summit held in September 2015, the leaders of 193 UN member states expressed their adherence to the 17 Sustainable Development Goals (SDGs) of the 2030 Agenda which, as a global action plan, aims at reducing poverty, fighting inequalities and injustice, and protecting the environment by 2030 [1]. In monitoring progress towards these goals, Earth observation (EO) solutions play an important role in providing information where national data are not available or are costly [2,3,4,5,6,7].
Night-time lights (NTL) satellite images have also been used in a variety of other studies, such as gross domestic product (GDP) estimation [8,9,10,11,12,13], economic decline detection [14,15], ship detection [16], light pollution detection [17,18,19], urban expansion monitoring [20,21,22,23], human well-being measurement [24], built-up area mapping [25,26], modeling of electricity consumption dynamics [27,28,29,30,31], and fire detection [32].
The adoption of the 2030 Agenda with its 17 Sustainable Development Goals (SDGs) created a framework for a radical change in the use of geospatial and EO solutions: 60% of the 169 SDG-related targets and 232 indicators can be directly monitored with EO solutions [4]. SDG 10 aims at reducing inequalities, which include, among other actions, empirical evidence production and monitoring the evolution of inequalities within and among countries. The monitoring of the latter is not difficult for most countries where national accounts and national statistical offices have been established [33]. The difficulties are related to the measurement of sub-national regional inequalities, with two shortcuts: scarce statistical data and a considerable time delay in calculating regional GDPs. Our study links statistical and geospatial frameworks for improved monitoring and reporting on SDG 10. At the same time, to our knowledge, this is the first attempt to introduce EO solutions in measuring SDG 10 at the sub-national level.
We chose Romania as the study area for three reasons: it is one of the most unequal countries of the European Union (EU) [34,35,36,37,38,39,40]; these regional inequalities have been generated in the last 20 years [41,42,43]; and the country has started an economic development process from a low level, making it very suitable for the application of night-time light data from satellite imagery [44]. However, the results are not limited to the area of study, as will be shown in the following parts of the article.
The literature on regional inequalities focused until recently on local tax income from household surveys and GDP per capita from national accounts, as a complex measure of economic development highlighting inter-regional differentials worldwide [34,45,46,47,48,49,50,51,52,53] or applying case studies in a Romanian context [34,35,36,42].
However, the above-mentioned economic indicators used to measure regional inequalities have several limitations, such that GDP is measured directly only at the national level, while at the regional level it is calculated indirectly with a two-year delay compared to the national one [3,54]. Compared to traditional statistical data, night-time lights satellite images have a number of advantages: regional inequality can be calculated locally in real time (instead of waiting two years for the indirect calculations from national accounts); they have higher temporal resolution; and they can be obtained free of charge. Lately, some studies have focused on the use of night-time light data in measuring regional inequalities [54,55,56,57,58,59]. Xu [56] used population density and night-time lights (NTL) satellite images to measure regional inequality of public services at four different scales in China (national, economic regions, provinces, and prefectural cities) and their changes between 2005 and 2010. Zhou [54] analyzed the socio-economic inequality at the subnational level in China, calculating three inequality indices based on the methodology used to calculate the Gini coefficient, the Theil index, and the Lorenz asymmetry coefficient. They found that the Gini and Theil indices at the provincial level were lower than the indices obtained at the county level, and thus obtained a positive statistical correlation between Visible Infrared Imaging Radiometer Suite (VIIRS) night-time radiance and GDP and population.
Although in the last decades a series of studies have dealt with the issue of regional inequalities, there is a large research gap focusing on subnational scales. The purpose of our study is to measure regional inequality in Romania, for the 1992–2018 period, at the county level (NUTS 3 units), using night-time lights (NTL) satellite images, in order to monitor progress in the direction of SDG 10 (reduced inequalities).

The NPP-VIIRS satellite images were collected by the National Oceanic and Atmospheric Administration and National Aeronautics and Space Administration (NASA). The Suomi National Polar-orbiting Partnership (NPP) satellite records light intensity using VIIRS (Visible Infrared Imaging Radiometer Suite) sensors, which collect data in 22 different spectral bands, one of which is the DNB (day/night band). These data are available at an annual scale for 2015 and 2016, and a monthly scale for the 2012–2019 period; their resolution is 15 arc-s (approximately 500 m). In this study, we used Version 1 VIIRS Day/Night Band Night-time Lights suite produced by the Earth Observations Group (EOG) at NOAA/NCEI (National Centers for Environmental Information) [61]. From the annual data we used the "vcm-orm-ntl" layer (VIIRS Cloud Mask–Outlier Removed–Night-time Lights) for 2016, which contains cloud-free average emitted radiance expressed in nW/cm2/sr; these data were subject to an outlier removal process to filter out fires and other ephemeral lights. As regards monthly data, there are two configurations of the NPP-VIIRS composites: “vcmcfg”—data contaminated by stray light are removed, and “vcmslcfg”—data contaminated by stray light are corrected [59]. Thus, for 2014 and 2018, the averaging pixel brightness was calculated based on the monthly data (“vcmslcfg”) corresponding to the summer months (May–September), and two composite VIIRS night-time light images resulted. We used the summer months (May-September) because there were no areas covered in snow in Romania during this period.
The night-time light data were extracted using the ArcGIS 10.1 software, at the level of equal cells of 0.15 m2, based on DMSP/OLS satellite images for 1992–2013 and NPP-VIIRS satellite images for 2014–2018. The DMSP and the NPP-VIIRS data were aggregated on a spatial grid of 0.15 km2 using the Zonal Statistics tool in ArcGIS software. With this tool, a mean statistic was calculated for each grid cell of 0.15 km2 (earlier defined) based on values from NTL data. The NLDI was calculated using the MATLAB software for 41 counties for the 1992–2018 period. The geographical variables (altitude, latitude, and longitude) were deviated from DEM SRTM (Digital Elevation Model - Shuttle Radar Topography Mission) by 90 m.

We demonstrated in our study that Earth observation solutions could play an important role in monitoring progress in the direction of SDG 10 (reduced inequalities). The NLDI calculated from night-time lights (NTL) satellite images proved to be a good proxy for the real time measuring of economic output, while the NLII calculated for the estimation of regional inequalities represents, to our knowledge, an absolute novum in inequality literature. The NLDI has high potential for estimating income and implicitly GDP, as evidenced by the high correlation coefficients. In this regard, the second-order polynomial model proved to be the best model in estimating income, compared to the linear and exponential regression model. The polynomial regression model brings about a significant improvement in the explained variation compared to linear regression.
Moreover, we successfully combined geospatial information and EO (from satellite) with modern data processing (MATLAB, GIS), thus offering an unprecedented opportunity for the real-time tracking of SDG 10. All these tools provided reliable information on the state of economic output and economic regional inequalities, as well as their change over time. We believe that this combination can be successfully used in other spatial and national contexts where data on local tax incomes are available. The above-mentioned combination of methods and techniques is not place-bounded since satellite images are available for all countries. It would be very interesting to see if the relationship between regional economic development and the night-light satellite images is maintained in countries with advanced economies and where light pollution is reduced by modern technologies. Our future research will continue into this direction.
The analysis of the statistical relationship between the NLDI and demographic and socio-economic variables has shown a strong indirect relationship between the NLDI and local tax income and GDP per capita. The lack of relationship between the NLDI and geographical variables shows an aleatory spatial distribution of rich and poor areas. Multiple regression analysis using standardized coefficient values reinforces previous results, with income and GDP having the largest contribution in explaining the total variation.

All authors contributed equally to the research presented in this paper and to the preparation of the final manuscript. All authors have read and agreed to the published version of the manuscript.

This work was supported by a grant of Ministery of Research and Innovation, CNCS-UEFISCDI, project number PN-III-P4-ID-PCCF-2016-0084, within PNCDI III.

Thanks for the funding support. 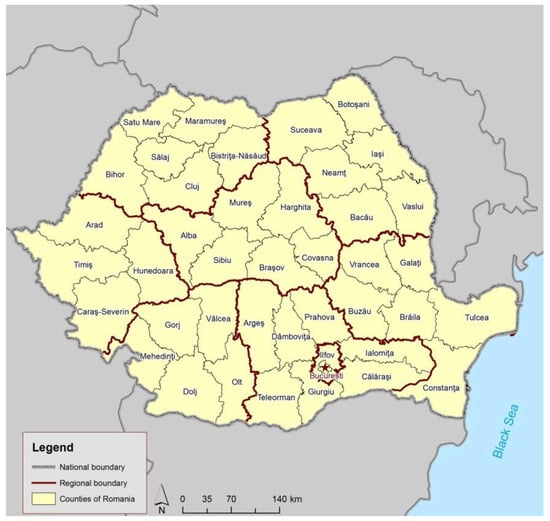 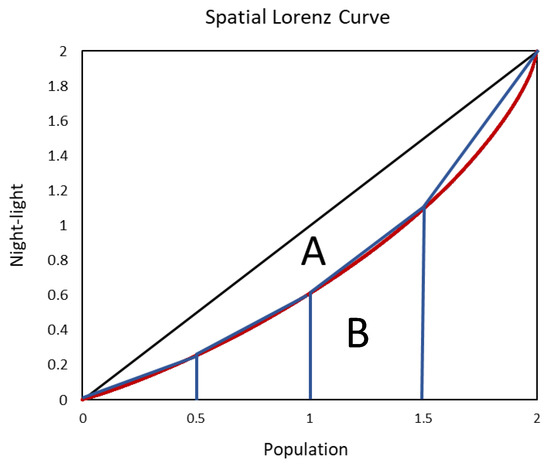 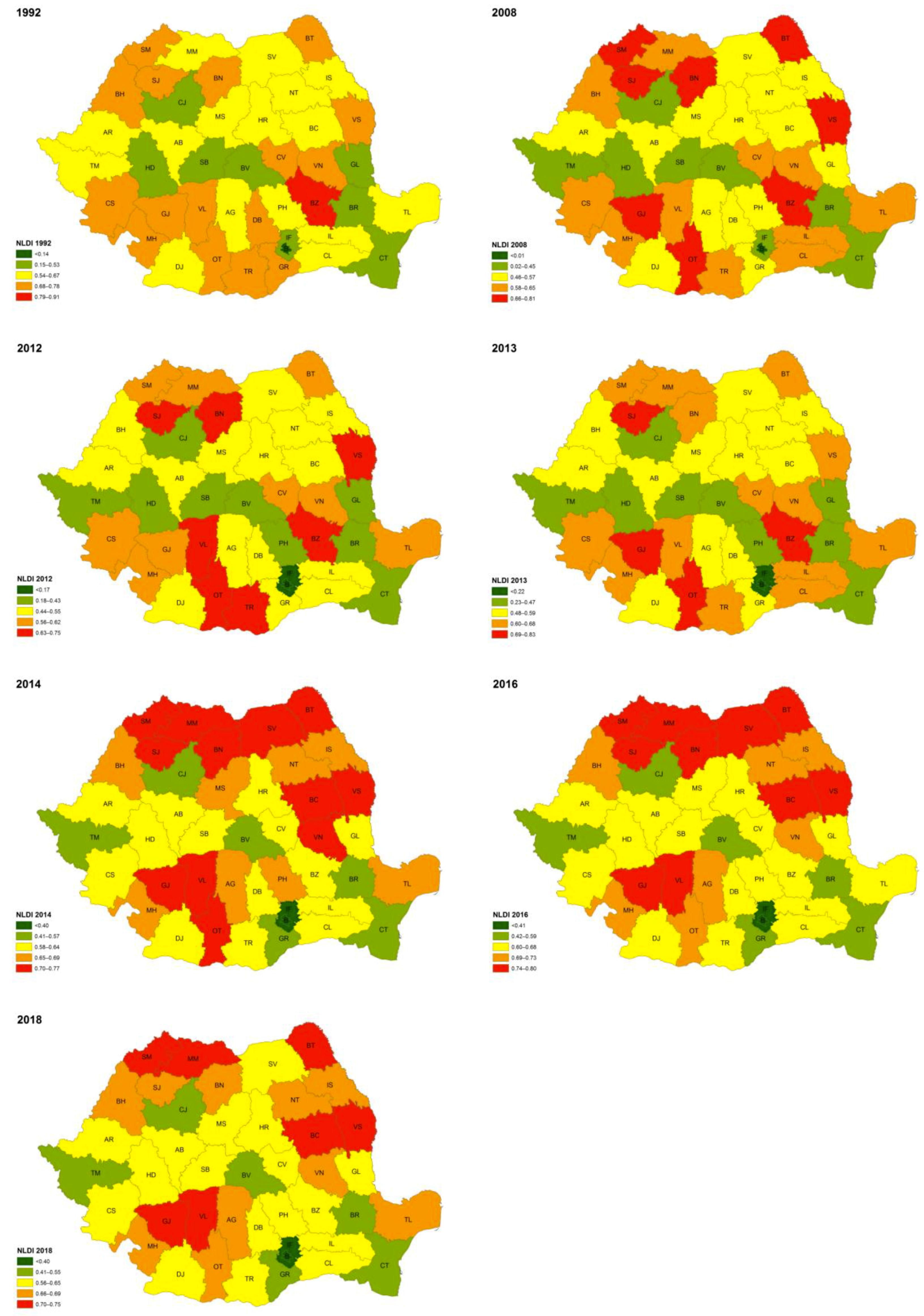 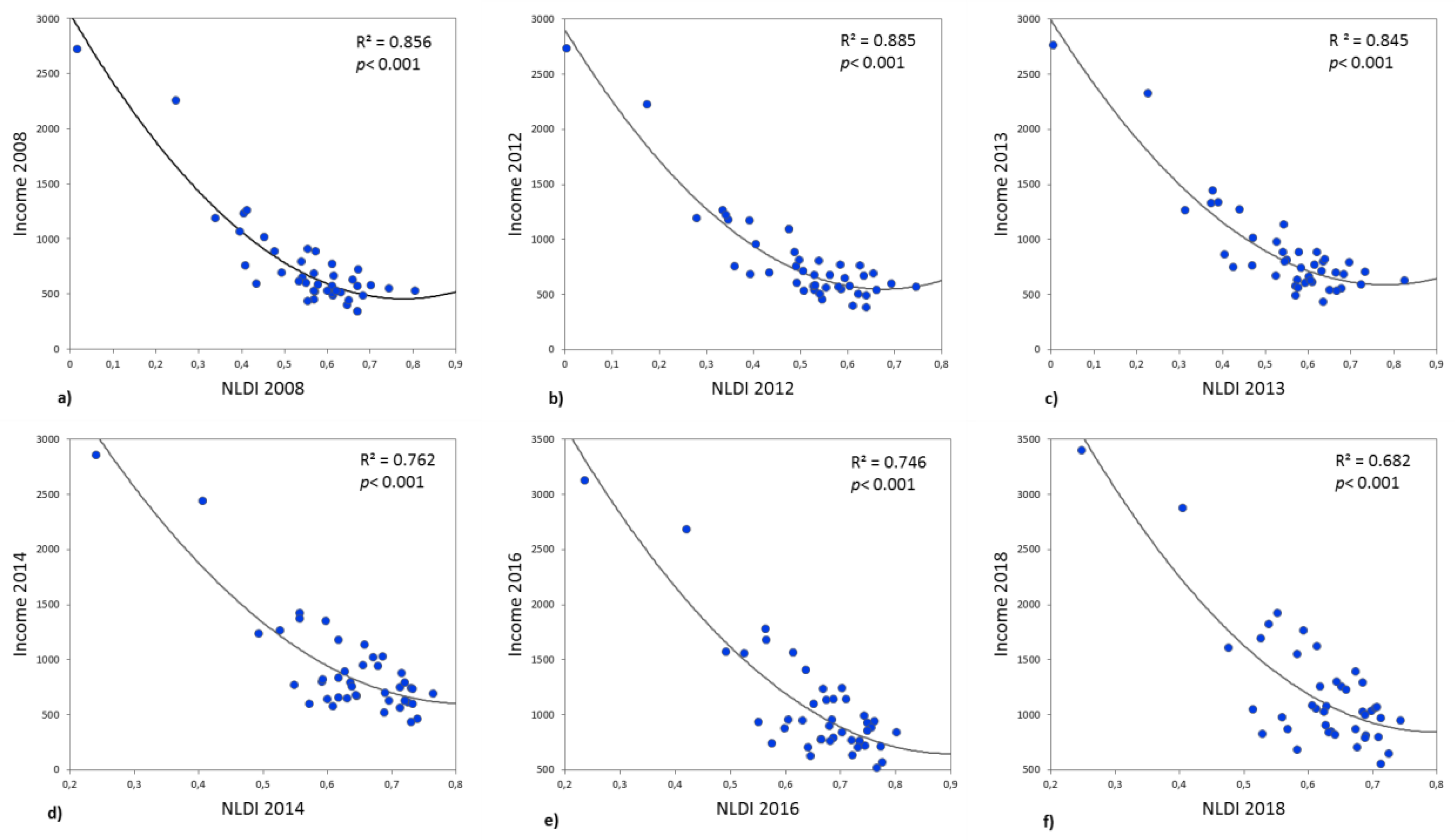