The novel space-borne Global Navigation Satellite System Reflectometry (GNSS-R) technique has recently shown promise in monitoring the ocean state and surface wind speed with high spatial coverage and unprecedented sampling rate. The L-band signals of GNSS are structurally able to provide a higher quality of observations from areas covered by dense clouds and under intense precipitation, compared to those signals at higher frequencies from conventional ocean scatterometers. As a result, studying the inner core of cyclones and improvement of severe weather forecasting and cyclone tracking have turned into the main objectives of GNSS-R satellite missions such as Cyclone Global Navigation Satellite System (CYGNSS). Nevertheless, the rain attenuation impact on GNSS-R wind speed products is not yet well documented. Evaluating the rain attenuation effects on this technique is significant since a small change in the GNSS-R can potentially cause a considerable bias in the resultant wind products at intense wind speeds. Based on both empirical evidence and theory, wind speed is inversely proportional to derived bistatic radar cross section with a natural logarithmic relation, which introduces high condition numbers (similar to ill-posed conditions) at the inversions to high wind speeds. This paper presents an evaluation of the rain signal attenuation impact on the bistatic radar cross section and the derived wind speed. This study is conducted simulating GNSS-R delay-Doppler maps at different rain rates and reflection geometries, considering that an empirical data analysis at extreme wind intensities and rain rates is impossible due to the insufficient number of observations from these severe conditions. Finally, the study demonstrates that at a wind speed of 30 m/s and incidence angle of 30°, rain at rates of 10, 15, and 20 mm/h might cause overestimation as large as ≈0.65 m/s (2%), 1.00 m/s (3%), and 1.3 m/s (4%), respectively, which are still smaller than the CYGNSS required uncertainty threshold. The simulations are conducted in a pessimistic condition (severe continuous rainfall below the freezing height and over the entire glistening zone) and the bias is expected to be smaller in size in real environments. View Full-Text
Keywords: GNSS Reflectometry; wind speed; rain effect; rain attenuation; DDM simulation GNSS Reflectometry; wind speed; rain effect; rain attenuation; DDM simulation
►▼ Show Figures 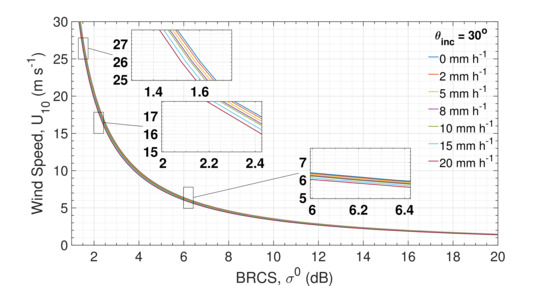