Satellite altimetry has been successfully applied to monitoring water level variation of global lakes. However, it is still difficult to retrieve accurate and continuous observations for most Tibetan lakes, due to their high altitude and rough terrain. Aiming to generate long-term and accurate lake level time series for the Tibetan lakes using multi-altimeters, we present a robust strategy including atmosphere delay corrections, waveform retracking, outlier removal and inter-satellite bias adjustment. Apparent biases in dry troposphere corrections from different altimeter products are found, and such correctios must be recalculated using the same surface pressure model. A parameter is defined to evaluate the performance of the retracking algorithm. The ICE retracker outperforms the 20% and 50% threshold retrackers in the case of Ngangzi Co, where a new wetland has been established. A two-step algorithm is proposed for outlier removal. Two methods are adopted to estimate inter-satellite bias for different cases of with and without overlap. Finally, a 25-year-long lake level time series of Ngangzi Co are constructed using the TOPEX/Poseidon-family altimeter data from October 1992 to December 2017, resulting in an accuracy of ~17 cm for TOPEX/Poseidon and ~10 cm for Jason-1/2/3. The accuracy of retrieved lake levels is on the order of decimeter. Because of no gauge data available, ICESat and SARAL data with the accuracy better than 7 cm are used for validation. A correlation more than 0.9 can be observed between the mean lake levels from TOPEX/Poseidon-family satellites, ICESat and SARAL. Compared to the previous studies and other available altimeter-derived lake level databases, our result is the most robust and has resulted in the maximum number of continuous samples. The time series indicates that the lake level of Ngangzi Co increased by ~8 m over 1998–2017 and changed with different rates in the past 25 years (-0.39 m/yr in 1992–1997, 1.03 m/yr in 1998–2002 and 0.32 m/yr in 2003–2014). These findings will enhance the understanding of water budget and the effect of climate change. View Full-Text
Keywords: lake level; satellite altimetry; Tibet; retracking; TOPEX/Poseidon; wetland lake level; satellite altimetry; Tibet; retracking; TOPEX/Poseidon; wetland
►▼ Show Figures 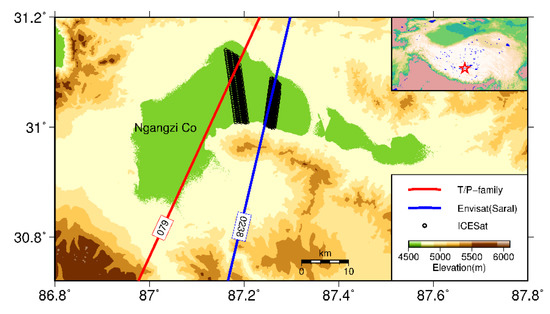